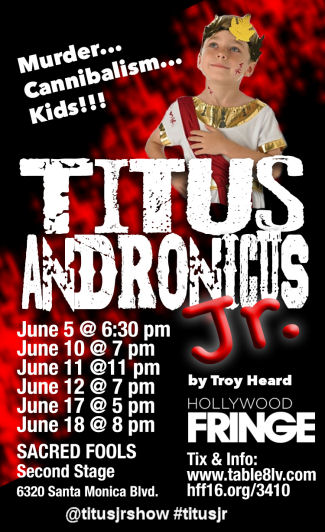 Now, I know middle school theatre, and I’ve grown spoiled by good middle school theatre. My daughter was at Nobel Middle School (FB) when their drama program was reborn about 10  years ago, and we’ve seen a large number of excellent productions since then. So, when I heard that Dawson Middle School from Las Vegas was doing a Fringe show, I just had to go. Then I heard they were doing Shakespeare. That cemented it. It was a must see.

So last night, I went into the Black Box theatre at Sacred Fools (FB) to see the show. There was the usual cheesy set. They could really take a lesson from Nobel, believe you me. Then the drama instructor, Mr. Benjamin, gets up to introduce the play:

This year, Ms. Pennington, our school principal, asked if I would direct the Spring Play. And although I’ve never directed a play before, I’ve heard the commentary track on the Pulp Fiction DVD like a thousand times, so I figured it shouldn’t be too hard, right?

And since kids needs to be nourished by studying the classics, I chose William Shakespeare’s Titus Andronicus. I mean, it was his first play, so it shouldn’t be too difficult to put on.

Anyhow, we’ve had auditions and the cast is pretty good. They’re learning their lines and helping out with the set.

He then introduces the leads, and notes about one of them:

This is Noa. Noa plays Tamora.

Coincidentally my wife’s name is Tamra. Yeah…you probably know her. She makes herself pretty well known everywhere she goes….

We then come to realize that he is in the middle of a massive breakup, and this instructor is being a little passive aggressive… OK, sometimes really aggressive, about his wife.  And the show begins….

Being serious for a moment: What you see above is the setup for Titus Andronicus Jr., a comedic play really being done by middle school students from various schools in the Las Vegas area, and funded by a GoFundMe to come to the Hollywood Fringe. The description in the Fringe catalog said: “After a divorce leaves him suffering a nervous breakdown, a teacher at the posh Dawson Middle School receives the final insult when he is tasked with directing the school’s spring play. Reeling from his personal collapse, Mr. Benjamin chooses to lead the kids in Shakespeare’s bloodiest tragedy: Titus Andronicus.”

This show, written by Troy Heard (FB), was invited to be part of the Organic and Homegrown Playwrights Festival (FB) at UNLV where it was presented as a staged reading in March 2016. The World Premiere staging was at the Onyx Theatre (FB) during May 2016. The Onyx is one of the small professional theatres — I don’t know its size, but think of a Sacred-Fool-ish to something perhaps larger — in Las Vegas. Yes, Vegas has a theatre scene beyond what is done on the Strip (although I do recommend Evil Dead: The Musical (FB) on the Strip). The GoFundMe provided the funds to bring the show to HFF, although it wasn’t good enough to get them into the opening night party.

Reading the Fringe schedule I found the description of the show, and put it on my short list of shows to see because it just sounded so warped. It lived up to my expections. If you read the intro (which I grabbed from their GoFundMe), you know the setup: mentally distraught teacher is having to do the spring show: a group of middle schoolers of varying talents putting on a version of Titus Andronicus. Yes, they do the Shakespeare, blood, gore, guts and all, modulo some trigger warnings. As the show goes on, the drama teacher Mr. Benjamin gets drawn into the action more and more, partially because the fellow playing Aaron has a tremendous case of stage fright. Combine this with alcohol, and you get the picture. I don’t want to spoil the end or the middle, but let’s just say that this play lives up to its name, with perhaps a little Lord of the Flies thrown in.

Given the nature of this show, it is difficult to assess. Watching the show, I began to wonder why I always approach Shakespeare from a warped direction. Moonlighting‘s “Atomic Shakespeare” was my intro to  The Taming of the Shrew. The Four Clowns Presents Hamlet was my introduction to the Prince of Denmark (if it wasn’t the Lion King). Bard Fiction was my introduction to that Shakespeare classic Pulp Fiction. This was my first exposure to Titus. Looking at the wikipedia pages today, I see they got the story mostly correct, although it was a little hard to follow. The drama teacher might have been part of that.

Essentially, the kids got Titus right — or at least what you might expect a middle school production to do. The descent into madness that was the Junior version was also well done — it drew you into the descent and was hilarious in its bloody incongruities and defying of expectations of what a kid show was.

As Mr. Benjamin, Thomas Chrastka (who happens to be the Sound Designer of Evil Dead) captures the descent and desparation of a drama teacher quite well. I know drama teachers like that. As for the kids, it is harder to judge because not only are they kids, but they are playing kids doing Shakespeare. At that, they were all remarkable. The kid cast consisted of Ken Haley (Titus Andronicus), Gary Easton/FB (Saturninus), Noa Agatstein/FB (Tamora), Joshua Smithline (Marcus), Joelie Mountain (Lavinia), Maxwell Claydon (Aaron), Cash Freeman (Bassianus / Quintus / Messenger), Ashlee Grubbs (Mutius / Demetrius), and Will Haley (Lucius / Chiron). They were all very funny — I particularly liked Agatstein’s Tamora, Mountain’s Lavinia (especially after losing her hands), Haley’s Titus, Claydon’s Aaron, and watching Easton come on and off stage with Saturninus’ walk was hilarious.

The production was directed by Troy Heard (FB), with music provided by Mr. Benjamin… I mean Thomas Chrastka. The sets were by Mr. Benamin’s third period (in reality, the production design was by Troy Heard (FB)), the lights were by Mr. Jenkins shop class (in reality, Cory Covell/FB and Coral Benedetti/FB), with sound design by Sam Murphy/FB. Costumes were by Maxwell’s mom, Mrs. Claydon. Cassidy Bonifacio/FB was the assistant stage manager.

There are two more performances of Titus Andronicus Jr. at the Hollywood Fringe Festival (FB) [June 17 @ 5pm, June 18 @ 8pm], and you should really go see it. Tickets are available off of the show’s Fringe page. Be prepared for trigger warnings, blood, violence, and adult themes. This is not your typical middle school production.

As a PS: I fear this is what will happen at Nobel now that its founders have moved on: Fanny to run the performing arts magnet at Van Nuys HS, and Jean to do Drama and English at the Porter Ranch Community School.