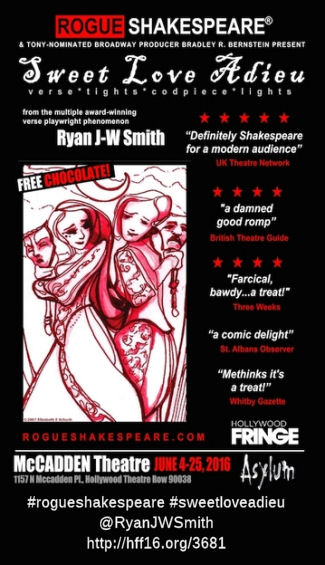 Having been reintroduced to the comedic possibilities of Shakespeare through his timeless classic Bard Fiction, and having seen even more comedic possibilities in Four Clowns Presents Hamlet, I was eager for more Shakespeare in the schedule. No, Titus Andronicus Jr. didn’t satisfy my appetite.  I wanted more. I wanted parody (before the real thing, which will be our last HFF16 show). Reading through the schedule, my eyes set upon Sweet Love Adieu (which had not acquired its subtitle yet). From an established company. A production that had gotten rave reviews in the past. Something a bit bawdy (because I was not going to this). Plus, there was free chocolate.  The description in the catalog was short but intriguing:

Coming out of the production, my basic impression was: Ren-Faire theatre done long. That’s not necessarily a bad thing (in fact, I still believe that one of the other shows in Fringe was a production I saw at Nottingham Festival last year (hmmm, it appears it was)). But typical Ren-Faire Shakespeare uses the rhyming couplets and combines it with the bawdy humor and risque word play of Faire (without really showing anything at all). This was all that, extended to 80 minutes or so. If you go in expecting that, you won’t be disappointed.

The plot of Sweet Love Adieu revolves around a love-sick William who instantly falls for Anne Beaumont, who is the ward of the stereotyped villain Lord Edmund. When Edmund decides that he will have Anne as his bride, William and Anne become secret lovers as they plot with their friends, cousins, mothers, and friars to outwit the nefarious Edmund and his feckless manservant Sidney. Homage is paid to Shakespeare’s comedies through cross-dressing, period music, marginal swordplay, and a happy ending.

The free verse was quite good, and there were numerous references to modern technology that were quite clever. There were times where the fourth wall was broken, and that too was great fun.

I think my basic point here is one of managing expectations. This piece is quite fun to watch. It is well performed and cleverly written. But it is, at its heart, a Renaissance Faire stage show with the level of bawdy humor and depth of plot one would expect from such a piece. It would do great at Southern Faire or Nottingham or any of the Northern brethren. But deep theatre it is not; particularly fringey it is not.  But you do get chocolate. Good chocolate. Chocolate that made it clear that they spent the money on chocolate instead of a program (you had to find the players online)

One additional note: Given the recent kerfuffle over the abuse at the Profile Theatre in Chicago, and the resultant collateral damage at Bitter Lemons, the issues of sexual harassment and non-consensual sex were heavily on my mind. Watching this sex farce, where the men were constantly treating the women like objects and attempting to (essentially) sexually force themselves on them, was quite uncomfortable. I’m well aware of how this was the style of those days. Still, it goes to show how even historical drama (or comedy) can raise questions for today, and why we must remember to view things in the light of their times — and think about how far we have come.

As I said before, the company putting it on performed it well and handled the language quite well. Let’s start with the folks that attracted my attention whenever they were on stage: the ladies:  Faith Kearns (FB) as Audrey, Katey Zouck (FB) as Anne, and Megan Barker (FB) as Faith. All three exhibited a wonderful sexy spunk that was just fun to watch — and the sex didn’t come from exposing skin but from a great assertive attitude that was just projected out to the audience. These were no-nonsense gals; all great.

The three guys — William and his two friends, who also handled multiple roles, were portrayed by Jason Linforth (FB) [William], Lance Frantzich (FB) [Ridley / Doctor / Magistrate / Priest], and Ryan Stiffelman (FB) [Latimer]. Linforth’s William was a suitably handsome and clueless young lad, and Frantzich was a hoot in his multiple roles — particularly as the priest with his non-priestly inclinations.

The remaining characters: Lord Edmond and his aide, Sidney, were played by Roger Carvalho (FB) and the author, Ryan J-W Smith (FB),  respectively. Carvalho’s Edmond was suitably sinister, and was fun to watch when his, umm, member was damaged. Smith’s Sidney captured the plotting quite well.

On the technical side, the production was written and directed by Ryan J-W Smith (FB). Lisa Lynn is the company manager. Because they spent all their money on chocolate, they must have pulled random people off the street to handle lights, costumes, and the like because no one is credited on their website. 🙂

There are two more productions of Sweet Love Adieu — June 24th at 5:30PM and June 25th at 2:30PM. Tickets are available through the Fringe website. It is essentially running in repertory with Macdeth! (MacBeth Done Wrong), which also has two more performances: June 23 at 7:00 PM and June 25th at 8:00 PM. Again, visit the Fringe website for tickets. Oh, and go see a show at your local RenFaire — tickets to Nottingham in Simi Valley are on sale now.