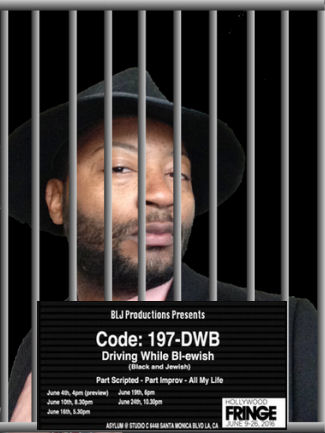 As soon as we finished watching the Aliens go after the Musical Stars to eliminate the competition, we quickly walked down the two blocks to Studio C, near the Complex, to catch our next show, Code: 197 – Driving While Blewish. As Aliens vs. Musical had let out late (at 4:07pm), we arrived at DWB about 4:15pm. Luckily, the show hadn’t started yet: just like we two hapless audience members, the actor was running on JST.

Perhaps I should describe what this show was, and that will explain the JST reference. Here’s the description from the Fringe guide:

Ben-El David, a.k.a Benny Weinberg, or is it Benny Lee Harris Weinberg-Lumpkins Jr., whatever it is, is blewish, a.k.a. black and jewish. Oy Vey! or Sababa!? Either way, the struggle is real. Benny has heard it all from “How are you Jewish?”, to “You’re not really Jewish, are you?”

Born in the home of the world’s first Jewish Crime Family, The Purple Gang, Benny’s early Jewish influences were all around him. As a young kid in the mean streets of Detroit, the Jewish curiosities began with a high school english teacher, Mr. Daniel Sheehy. Why was he never at work? What was that funny thing he wore on his head all the time? What’s a shmuck?

As an adolescent, and the final flight of Detroit Jews from the inner city to the suburbs was complete, Benny had lost touch with his Jewish friends, and their sense of community and ideologies. Fast forward to an era of new enlightenment for Benny and a hunger to regain his early Jewish inspirations, Benny began his adulthood journey into Judaism.

Would Benny have to forget his former life in order to find the answers he was looking for in Judaism? “Why Judaism?” Is their really a God? What’s this Jesus thing all about?

Combine the above with the original description, which ended with “These questions are answered and more at the only Oneg at hff16”, and you had me intrigued.

Now, we were at a preview performance: We had no choir. We had no Diversidad. We had no Oneg. But we still loved this show. Here’s why.

The show, starring Benny Lumpkins Jr (FB) a/k/a Benny Weinberg, is part scripted, and part improvised. The scripted portion provides the background of Benny’s conversion; the improvised portion includes Benny having audience members select particular topics from his life to discuss. From these topics, you learn what drove Benny to his conversion.

What I found most interesting, however, was his comments about the Jewish attitude towards Jews of Color. There is this inherent suspicion that they are not full Jews, that they are converts. Benny related how many of the Africans that were brought over for slavery were Jewish — there is a belief that many African communities were some of the lost tribes. They were forced into Christianity which was not their religion. As such, when they return to Judaism, why are they viewed as outcasts. Often, this comes from the very same Eastern European Jews who converts to Judaism in the 12th and 11th century for commerce reasons. The hypocrisy is fascinating, and belies the requirement that the convert be treated exactly the same as the Jew by birth.

Benny pointed out that this is a form of implicit or unspoken racism: How often Jews of European background simply expect a certain look for Jews — although this is unstated — and then suspect those who don’t look that way to be ersatz or “not real” Jews. This, of course, goes against Jewish teaching and against the inclusiveness that modern Judaism emphasizes. Having had a best friend who was a Jew of color, and knowing many other Jews of color, I have seen this in action. I, of course, think it is wrong — and thus, Benny’s show raises the awareness of this behavior — allowing us to correct it. Thought provoking, right? Exactly what theatre is supposed to do, right? [ETA: I edited this paragraph in because I wrote the first version very quickly, and later remembered that I wanted to make this point.]

So we really enjoyed this, and talked to Benny afterwards. In fact, he does take the show on the road, and I thought I could be thought provoking MoTAS meeting topic.

Benny noted that the show will be different each time. We won’t be able to fit it into our schedule, but you might…

Upcoming Shows: Ah, June. Wonderful June. June is the Hollywood Fringe Festival (FB), and I’ve already written about the shows I plan to see, as well as suggestions to the Fringe regarding viewing the audience as a customer. Our Fringe/June schedule is as follows (for shows in the past, ✍ indicates writeup is in progress; ✒ indicates writeup is complete):