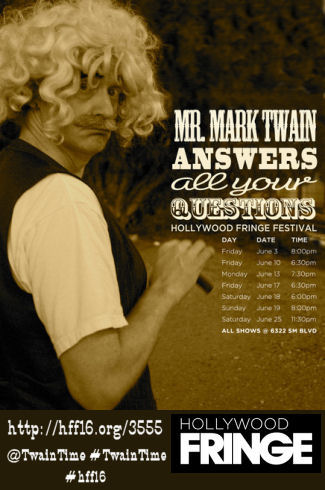 Our third show on Saturday was perhaps the weakest of the Hollywood Fringe Festival (FB) shows that we’ve seen so far — this is not to say that it wasn’t funny at points, but it was also much more improvised and disorganized.

The show was Mr. Mark Twain Answers All Your Questions, and the premise as described was: “Fresh off his award-winning performance at last year’s Poe Show,* Mr. Mark Twain is back with his one man show! This June at the new Sacred Fools space, Mr. Mark Twain will be shooting out the lights with stories, observations, and general nonsense (with extra nonsense on the side). If he fools around long enough, he may even say something worth repeating.”

As executed, it was a little different. The conceit was somehow that the Federal Bureau of One Person Shows was forcing Twain to do this show for some reason. The show involved Twain telling a few stories of his life, trying to tell some bad jokes, and the reacting and answering a number of questions from the audience in the Twain character. There was some level of audience participation, but in many ways the biggest question was whether Twain’s mustache would stay attached to his face. At our show, it didn’t and he eventually gave up.

Twain was played by a fellow named S. Clemens, who in reality was Ed Goodman (FB). Goodman was reasonably funny and quick on his feet, but I’m not sure he captured the Mark Twain character as the audience might expect.

Corey Rittmaster (FB) providedthe sound and voice, and served as the representative of the FBOPS when Twain broke the rules. Jeremy Aldridge (FB) helped develop the show and served as director. Suz Curtis was the Brainstorm Trooper. Mark Twain was partially funded by an Indiegogo Effort.

There is one more performance of Mark Twain Answers All Your Questions, Saturday June 25 at 11:30pm. Tickets are available through the Fringe Website.