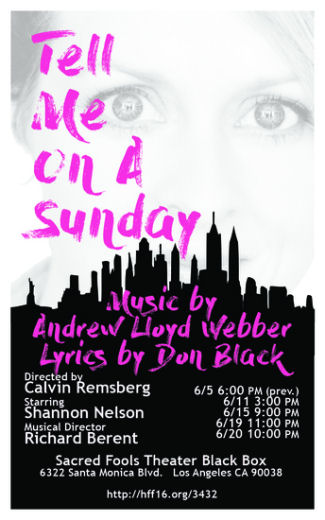 Some musicals have thousands and thousands of people. OK, hundreds and hundreds. Would you believe in the double digits? Others make do with small casts (like Toxic Avenger). Some only have two. Then there is the rarer musical that only has one. Andrew Lloyd Webber and Don Black‘s musical,  Tell Me On a Sunday (FB), which was our first show on Sunday at the Hollywood Fringe Festival (FB), is one of those rare musicals.

You can read the Wikipedia page for the story that led to this piece.  Briefly, it started as a one-act after Evita, first with Tim Rice, then Don Black. First performed in 1979, it was later combined with a ballet called Variations to create the musical Song and Dance. That’s where I first heard the piece: the London recording with Marti Webb doing the performance. It was reworked in 1985, eventually landing on Broadway with Bernadette Peters playing the role. Hint: Let Peters be Peters; don’t have her do a fake accent. It doesn’t work. It has been revived a few times since then. Many don’t like the character being portrayed. Still, it remains a great one-woman piece, and I’m surprised that it isn’t done more.

The story being told concerns Emma. She moves to New York for her boyfriend, who cheats on her. She dumps him, moves in with a friend. She finds another man to latch on to — a Hollywood producer. This prompts a move to Los Angeles. That relationship fails for a similar reason, so she goes back to New York. This time she meets a salesman and the relationship begins again… only to fail when she discovers his cheating. She finally gets her green card, and starts dating a married man. She does this one just for fun, no relationship, and then is faced with him at her door having left his wife. She decides she doesn’t want him either, and is left figuring out what she wants in life.

Not a particuarly likable character. Not a character who one would want to be. There’s lots of inner exploration, comments on the superficiality of Americans. In some ways, I wonder if the piece is a commentary on the state of American relationships. Still, the music is melodic — and if you listen closely, you’ll hear a little bit of Variations sneaking in (you’ll also hear a little in School of Rock).

Unsurprisingly, this show depends on its star. For Fringe, Emma is played by Shannon Nelson (FB). Nelson does a spectacular job capturing the emotion, vibrance, and spirit of the character. She sings extremely well, having only a little trouble with the extreme low note in “” (oops) “Unexpected Song”. I thoroughly enjoyed her performance. Calvin Remsberg (FB)’s direction worked well, especially in handling the lack of formal set pieces and the need for on-stage costume changes. Matt Valle (FB)’s choreography worked quite well.

Music was provided by Richard Berent (FB), who was the on-stage band… also of one.

The lighting design was by Brendan Hunt, and was perhaps the most problematic. My hope is that the lighting problems were due to this being a preview, but there were times where the actress was in the dark, or was hunting for the light. This should be corrected in subsequent productions.