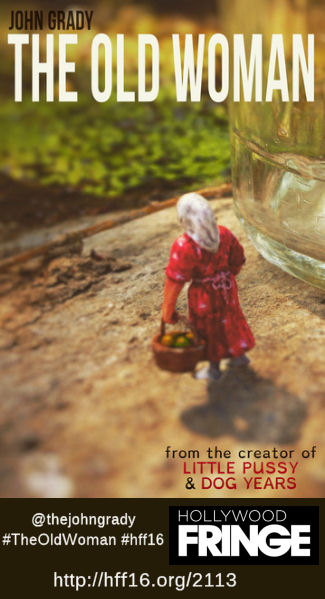 As I’ve said before, the Hollywood Fringe Festival (FB) has a wide range of projects, from first person narratives (our first Saturday show) to ensemble comedies (our second Saturday show) to improvised history (our third Saturday show) to… our last Saturday show: The Old Woman.  This show was another one-person show, but in a very different vein. Instead of going for the laughs (which it had), it went for the pathos and the emotion. It told the story of a son’s relationship with his aging mother, who is dealing with increasing dementia — combined with the worry that he might be facing the same fate.

In The Old Woman, John Grady (FB) starts with the simple: a walk with the dogs in Griffith Park. Through this, he introduces us to his mother, his family, and the questions of his own mental status. The story then moves into a visit with his mother, as he sees how she is becoming increasingly detached from the world. The production ends with a wordless dance — a ballet of sorts — that, well, left me thinking about what it was trying to say. My conclusion was that the dance was a tribute to his mother, her life, and her spiral down.

Saturday was a day for shows that hit home. Our first resonated with my wife, for she had also dealt with the issue of growing up with large breasts. The last resonated as well with both of us, as we’re dealing with dementia in her mom. We’re seeing everything that John portrayed: the short loop time, the argumentative nature, the refusal to do physical therapy, that intense desire to be someplace — any place else (and the realization from us, the children, that there is no other place else).

I think, of all the shows we’ve seen at the Fringe, this was perhaps was the most moving and touching of them all.

This was a true one person show; no credit was provided for director (so presumably John directed) or the technical (presumably arranged by John). That makes this even more powerful.

Sorry, I now need to go read my Shel Silverstein.

Alas, I think we saw the last production, but it might show up at the Fringe Encore in July. Watch  the Hollywood Fringe Festival (FB) pages for more information.