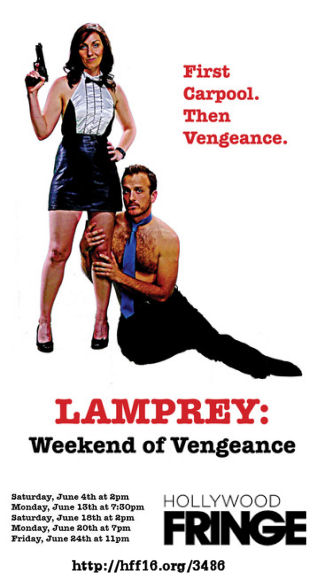 The sort of shows that you find at the Hollywood Fringe Festival (FB) run the full range, from one person shows to fully executed musicals, from deep dramas to comedies, to families shows to shows where both the audience and the actors are naked. Don’t expect a writeup from that last one. Some are shows from first time groups, and some are from established groups. Our second show on Saturday, Lamprey: Weekend of Vengence (FB) was one of the latter; another show from the folks that gave us the excellent All The Best Killers Are Librarians (which we saw during the preview weekend of Fringe) — the Serial Killers (FB) team.

Serial Killers (FB) is a Sacred Fools (FB) late night production where each week, three continuing stories face off against two new tales. At the end of the show, the audience votes for the three stories that will continue on to the next Saturday night, where their subsequent episodes will then be pitted against two completely new storylines. The season culminates in a head-to-head battle royale between the sixteen top serials, including the eight longest-running serials plus audience-choice selections!

Just as Librarians was a successful serial made into a full-length Fringe show, Lamprey was a successful serial made into a Fringe show. There are some who believe that it is funnier; I tended to prefer Librarians slightly, but it is a matter of taste. Both exhibited a strong sense of earnestness, of going for the comedy jugular no matter what it takes. One also got a sense that the actors were having so much fun they were attempting to make the other actors break their role from laughing. This worked extremely well on the Carol Burnett Show to amplify the humor. I think it worked well here as well. I can say that both of these productions made me want to explore Serial Killers (FB) more (if it wasn’t past my bedtime 🙂 ).

Here’s the description of the show from the Fringe writeup:

The Lamprey is a cop named Lynn Alvarado who is trying to get people to call her the Lamprey. She also has to solve the murder of her partner, but only has one weekend to do it! Her family has gotten non-refundable tickets for a Disney Cruise that leaves on Monday morning, and she like, HAS to be on it. The Lamprey must navigate the criminal world of Los Angeles, some by-the-book internal affairs agents, a masked killer looking to take her out and the to do list that her husband gave her. SOMEONE must get vengeance for her partner and also get the kids to Romp and Roll, and that someone is the Lamprey. Can one woman really have it all, when everyone is trying to kill her?

You can see why this description just pulled me in. The production, under the direction of Victor Isaac (FB), played (and some might say over-played) it for the laughs. I’ll note it was nice to see Victor again, albeit briefly. We last saw him at ACSAC 16 when he was part of the conference presentation of The Nigerian Spam Scam Scam. Victor kept the story moving along briskly, a rapid-fire sequence of scenes that were very funny, yet demonstrated the serial origin of the show.

As the Lamprey, Carrie Keranen (FB) was vibrating with vengeance, umm, intensity. Unlike her small role in Librarians, this role allowed her to play the comedy to the hilt, and she put all her energy into the effort.  She was a lot of fun to watch.

In primary supporting roles were Pete Caslavka as Chris Alvarado, the Lamprey’s husband and Maya Imani Estephanos (FB) as Jen Murphy, the Lamprey’s partner. Caslavka’s character here was nothing like his character in Librarians; here, he was one of the few people that could stand up to the Lamprey and call her on her shit. Another person who didn’t want to deal with the Lamprey’s shit was Estephanos as her (late) partner, Jen. With both actors, you could see well the exasperation they felt from dealing with this over the top character.

Playing secondary supporting roles (i.e., playing multiple characters) were Peter Fluet (FB) [Chief / James], Amanda Blake Davis (FB) [Agent Calhoune / Graci], Glenn  Stanton (FB) [Agent Corrigan / Barrick], Derek Mehn (FB) [Tony / Clint], Dana DeRuyck (FB) [Alexis / Coroner], and Marshall Givens (FB) [Cop / Priest / Killer / Doug].  Of these folks, the performances that remain stuck in my head are Fluet’s wonderful Chief, whose interactions with the Lamprey reminded me of the screaming on Moonlighting, and DeRuyck’s Coroner, who just had this wonderful look about her. The rest all gave great performances; it was those two that stood out in my mind above the rest.

Lamprey: Weekend of Vengeance was written by Peter Fluet (FB), who appears to have done a number of productions at Serial Killers. Scott Golden (FB) was the assistant director. HeatherLynn Gonzales (FB) was the Stage Manager. Sondra Mayer (FB) did the fight choreography, which was very good (although I still prefered the fight choreography on Librarians). Music Composition was by Zachary Bernstein (FB). Erik Engman was an associate producers and made a special appearance somewhere.

There are two more presentations of Lamprey: Weekend of Vengeance: Monday, June 20th at 7:00PM, and Friday, June 24th at 11:00 PM. It is quite funny and worth seeing. Tickets are available through the Fringe Website.