Well, it’s Friday at lunch, and you know what that means–it is time to clear out the bookmarked links that didn’t quite form into themes (although, as I type in the times, there does seem to be a general transportation/travel theme). So here we go… (and as a reminder, I’m still looking for thoughts regarding use of iTunes 11 with the iPod Classic):

I’ve been trying to avoid political posts since the post-mortem post, but something in today’s paper just got to me. In an article about the Speaker of the House, John Boehner, and his desire to stand firm on taxes there is the line:

Even though election-day exit polls showed most Americans have said they prefer the president’s approach — asking upper-income households to pay higher taxes — Boehner believes his party similarly won a mandate against tax hikes as the majority party in the House.

Boehner’s belief that he has a mandate based on the house majority is wrong. House seats are essentially winner take all: If a Republican is elected to represent a district, that does not mean that the district all agrees with that candidate. Further, the “winner take all” effect for congressional districts is amplified by the effect of Gerrymandering. In most states, districts have gone to particular parties because they were specifically drawn to permit that party to win. In some districts, there was no opposition to vote for. That, my friends, is not representational government. The article on Gerrymandering pointed out that overall, more Democratic votes for congress were received than Republican votes, and that wouldn’t surprise me either.

By the way, this goes both ways. Looking at the electoral map and numbers (332 to 206), you might think there was a strong Democratic mandate. You would be wrong. Here’s a map (h/t David Bell) that shows the states deformed to reflect population: 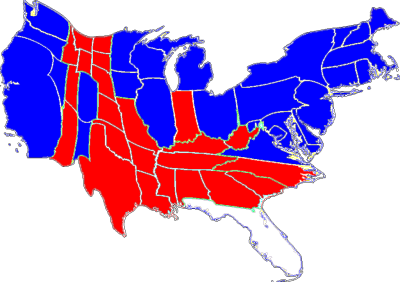 As you can see from this map, things are pretty much equal (especially when you realize Florida should be blue). Want more evidence? Here’s map showing voting by county where the shading along the line from blue to red represents the vote (h/t to Cousin Cole on Facebook for the original post of the map): 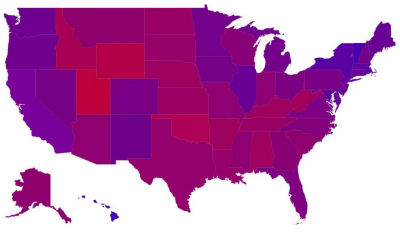 The point — which politicians seem to conveniently forget — is that there is no mandate for either side. The country is pretty evenly divided: who we wanted for President, the makeup of the senate, the voting for congress. This means that the best solutions are the ones that exhibit understand and concern for all sides, that include concerns and ideas from both parties, and that neither party is happy with. Far too often, we forget that a compromise is a solution that neither side loves, but that all sides are willing to hold their nose and live with. Obamacare would fall into that category, only the Republicans moved the goalpost at the end.

Now that the election is over, a few post-mortem thoughts:

Lastly, to all of my friends who were supporters of a side that lost…. Back in 2004, I took comfort in the song below. With a minor word change or two, perhaps it will help you: (source: Austin Lounge Lizards, “The Drugs I Need”).

You stare at your computer screen devoid of any joy and hope.
You’re so depressed. You can’t get dressed. You’re noose-ing up a rope.
Just remind yourself when you can’t stand it any more:
That we’ve been through some crappy times before.

Intolerable intolerance has swept across the land.
The gospel thumping homophobes have got the upper hand.
They are peeping though the windows and they are creeping through the door.
But we’ve been through some crappy times before.

Though we hear reassurances that everything is fine.
It’s been a while since we heard a canary in this mine.
When you think it’s really bad, it gets a little worse.
But keep on looking forward, though we’re going in reverse.

You shout out that the emperor’s not wearing any clothes.
He lies so much that you could hang your laundry from his nose.
The fox is in the hen house and the wolf is at the door.
But we’ve been thought some crappy times before.

The election is over… until the next one (oh boy, a mayoral race in Los Angeles). We now return you to your regularly scheduled cat videos.

It now seems that the best our electoral system can produce are candidates who can convince corporate donors that they will provide the best return on investment. That leaves voters holding their noses and choosing the one they believe will do the least damage, as neither candidate represents their interests. That has long been a serious problem, which the Citizens United decision has greatly exacerbated. Those who feel their vote doesn’t count have reason to feel that way. Once elected, politicians have to start raising money for the next election. There’s no time to listen to constituents who aren’t writing large checks. Fixing this serious problem would require politicians willing to sacrifice their careers by spurning their donors in favor of their country. The system strongly selects against any candidate who might have ideas like that. That’s why I always put a clothespin tightly on my nose before I vote. I wish I didn’t need the clothespin.

This got me thinking, so I set it aside to think about over lunch. Well, I’m eating lunch (a chicken salad wrap) as I write this, so I guess it is time to think… I’d like to break this though experiment into three parts: (1) why didn’t this happen in the past, (2) why is it happening now, and (3) what can we do about it.

Why didn’t we have this problem in the 1800s and early 1900s? The answer is that we did: politicians were in the pockets of corporate interests. That’s nothing new, and it goes back for ages — starting when someone realized that someone else’s decision could benefit them. What may have made it less of a perceived problem is that the nature of elections was different. Although candidates took money for votes, they didn’t need to raise excessive money to fund campaigns. That changed as more and more offices transitioned from ones appointed by state legislators to ones directly elected by the people. Add to that increased media outlets for advertising and an increased ability to move around the country quickly, and you see an explosion in the amount of funds spent on campaign advertising.

Our increased media outlets lead to the need to saturate the airwaves. That costs money. The American people have tried to level the playing field by introducing campaign reform… but the courts have viewed this as a free speech issue. Advertising is a form of speech — it isn’t that far of a stretch to move from printed handbills to TV ads. One can understand why there are no restrictions on who can make such speech, and why political speech must be unrestricted. Now that’s in the abstract. One needed only to watch the TV last night to see how that was being abused by PACs. We also see abuse of free speech on the Internet, where any kook with an internet connection can publicize their crazy conspiracy theory through websites and comments at news sites.

What To Do About It?

This is the hard part. Freedom of Speech is cherished in the US. In the past, we had some limitations on speech simply through the cost barrier of getting something printed and distributed, or having to get letters through an opinion editor. Those limitations no longer exist. Further, there are no limitations on groups pooling money to create a larger voice — be it a union, a non-profit advocacy group, a political action committee, or a corporation advancing their interests. To what extent is it reasonable to limit speech? How can we only limitthe udder guy?

I think the answer comes from two directions.

The first is transparency. When speech is made, it must be clear who is making that speech. That means, ultimately, that the individuals or lowest level organizations funding the speech and directing the message must be easily discoverable. That means, for commentary on news articles, one cannot hide behind aliases. Although there is some risk in doing this (especially if the speech is borderline treasonous or seditious), I think making clear the contents and origin of the speech permits informed reception of the speech, just as food labeling laws make us more informed consumers of food.

The second is reasonable limitations. Although we might not be able to limit the use of money as speech, we should be able to limit the use of money as a way to drown out speech. In other words, there should be saturation limits, so that all viewpoints can have the opportunity to be heard. This may require judgement from broadcast media personnel of the “side” of a particular advertising. The intent here is two fold. First, money should not provide the ability to limit speech by reducing the available locales for speech (i.e., you can’t buy up all the airtime so your opponent either has none or is forced to low-exposure channels). Secondly, money should not provide the ability for colluding viewpoints to saturate media (i.e., so multiple PACs from the same end of the political spectrum can’t saturate the airwaves with the same message that is ostensibly uncoordinated). In other words, people shouldn’t be able to abuse the rules.

Your thoughts on how to address this problem are welcome… after you vote, of course.

If you are an American Citizen… a final reminder… please remember that one of the benefits of citizenship is the ability to select our leaders and decide the direction for our government. Today, you have that ability… an ability to do something that many people in the world do not have the ability to do… an ability that many have give their lives to defend so that you can do it. Don’t waste it .. get out there and vote.

To those of you who are not citizens…. just be thankful that much of the craziness will be over by tomorrow. We thank you for your patience.

To all my friends who are voting for a President candidate simply because he is not (insert name):

As always, an informed and educated voter is a better voter. Even if they vote for someone I disagree with.

I’d like to make a plea. Even if you are tired, vote. Vote as if your life depends on it, for it does.

No, I’m not necessarily talking about the Presidential election. I’m in California, and voting for Obama. I’m one of many Democrats, and if I was Republican, I’d be outnumbered by those Democrats. So I might think my vote doesn’t count… but it does.

There are many contests on your ballot. Propositions. Congress. Senate. Local. Local measures. Some are competitive; some are not. But there is at least one of those measures or people that will have a direct impact on your life, and the contest going the way you want depends on you getting out there and casting your vote. It is vital that you vote.

For me, that issue is Proposition 30. It will directly affect my pocketbook by affecting UC tuition. But for someone else, it may be the Senate election. The state assembly. Other propositions. But I guarantee you, at least one will affect you, and you must vote.

(insert contest here) is depending on you. Get out and vote!

I was going to write today about a couple of articles related to gasoline and gas stations, but I’m going to put those aside because of some interesting political articles I saw today: