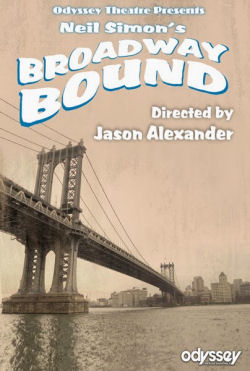 Back in the last century — especially in the period between the 50s and the 80s — if you wanted comedy you went to a Neil Simon play or musical. Productions like the “The Odd Couple“, “Hot L Baltimore“, “Plaza Suite“, “Little Me”, “Sweet Charity” and many others were reliable comedy vehicles. Today, however, Simon seems to be forgotten. His plays — which were laugh-a-minute joke fests — are produced far less often. But I’ve always liked Neil Simon, and try to see his plays when I can. I have memories (which I believe to be true) of seeing Simon’s Eugene trilogy when it was first performed in Los Angeles in the 1980s at the Ahmanson (the last show was in 1989, but I think I was getting selected Ahmanson tickets then). More recently, REP East (FB) Playhouse has produced the middle show in the trilogy (I thought they did the first show as well, but can’t find the writeup). When I read that Jason Alexander (who we had recently seen in Las Vegas) was directing a production of the third show in the trilogy, “Broadway Bound“, I started looking for tickets. Luckily, the Odyssey put them up on Goldstar… and so last night saw us in West LA at the Odyssey Theatre Ensemble (FB), watching the final chapter in the story of Eugene Jerome.

Let me start by giving some background on the Eugene Trilogy itself. The trilogy is a very slightly veiled autobiographical series of plays, with the Eugene Jerome character serving as Simon’s stand-in; Eugene’s brother, Stanley, corresponds to Simon’s brother, Danny. The first chapter explored Eugene’s early days in Brighton Beach; the second chapter explored his growth into writing while in the Army. The third chapter (“Broadway Bound“) obstensibly explores Neil and Danny Simon’s (Eugene and Stanley Jerome’s) first foray into the comedy writing world as they become writers for television. As such, you would expect the focus of “Broadway Bound” to be Eugene — and that’s what I remembered about the play from when I saw it in my 20s.

I’m no longer in my 20s — instead, I’m much closer to the age of Eugene’s parents in the story. Further, I’ve been married just about as long as Eugene’s parents have been married (today is the start of year 30; Eugene’s parents have been married 33 years). Seeing “Broadway Bound” again with an additional 30 years of experience under my belt, I’ve come to realize that this third chapter isn’t a story about Eugene. It really is a story about Kate and Jack, Eugene’s parents. The disintegration of their marriage and the strength of the mother is the focus of this story; Eugene and Stanley propel it along, but their story is a secondary one. Many critics have harped on this as making this story weaker — they’ve cited it as evidence that Simon just tried to pile too much into the story. I think that is more a reaction to the bait-and-switch: you go in expecting another joke-a-minute comedy like “Bixoli“, and discover you are in more of a dramedy exploring the impacts of aging on a family.

When you look at “Broadway Bound” as a comedy — especially if you are expecting the constant jokes of the early Neil Simon — you’ll be disappointed. Although the play is quite funny (although not as funny as last week’s “Buyer and Cellar“), you don’t walk out feeling the humor. In the play, the humor comes from Eugene’s observations about life. However, when you look at “Broadway Bound” as that dramedy, it fares quite well. For example, in Ben Epstein (Kate’s father), I clearly see the aging of my mother-in-law — the stubbornness, the forgetfulness, and the unexpected behavior. It reminds me not to get upset at these things, but to find the humor in them. I see elements of long-term relationships I’ve seen in Kate and Jack: how raising children can distance parents; how not talking about problems can push people away from each other; and how the key elements in a relationship is not fidelity, but trust. These are useful lessons, presented with gentle humor. Lastly, the play presents how different parties in a relationship see things in different ways. Kate always see Jack as the young man that he was — the man who noticed her because she danced with George Raft. Jack, on the other hand, sees Kate as she is: a woman who no longer hears him, can discuss things with him, and who is just focused on serving. It shows the growing apart with gentle humor.

As for Eugene and Stanley’s story, it is just the backdrop upon which this relationship story is told. It provides the impetus for the movement of time; it allows Eugene to opine on what is happening. But through the story the characters of Eugene and Stanley never really change. They were comedy writers at the start, and they are comedy writers at the end. The comedy allows them to detach and observe life, but they never learn from it. They can see the humor in what is happening, but can they see the pathos? They also shift in their view of home: it is in this play that Eugene and Stanley (Neal and Danny) move out of the house and being their adult lives, no longer tied to the family drama.

Jason Alexander (FB) adds a number of directoral touches that shows his familiarity with that era from his childhood. Directors can’t influence the written words of the script, but they can influence how they are presented, how the set is decorated and arranged, and the unspoken nuances of the character action. From the absent-minded actions of the mother to the lilts in the movement, Alexander made these people realistic. It was joy to watch.

The presentation was also helped by the talent of the acting ensemble. The youngest generation was portrayed by Ian Alda (FB) as Eugene Jerome and Noah James as Stanley Jerome. Alda demonstrated the talent in his familial lineage — at times he had the winning smile and charm of his famous uncle, and he handled the drama and movement as well as his grandfather. His Eugene was not overly annoying, nor did it channel Matthew Broderick or others that have portrayed the character. James’ Stanley was appropriate boyant, energetic, and crazy. He kept reminding me of someone — I want to say a young Bronson Pinochot. This is a good thing, for he brought the correct intensity to the character.

The parents generation was represented by Gina Hecht (FB) as Kate Jerome, Michael Mantell as Jack Jerome, and Betsy Zajko (FB) as Blanche Morton (Kate’s sister). Hecht has worked with Alexander before, and their familiarity comes through in the easy and realistic way she inhabits Eugene’s mother. She makes the mother believable, with both realistic pain and joy. She brings Kate to life. We see less of Mantell’s Jack, but Mantell’s portrayal makes him come across as … tired. He’s not tired in a depressed way, but its obvious his character is craving more out of life than the same-old same-old, and Kate just doesn’t see that, driving him away. Mantell does a great job of bringing him to life. Lastly, Zajko’s Blanche has a much smaller role (one scene), but she handles that well and believably.

The grandparent’s generation was represented by Allan Miller (FB) as Ben Epstein. He captured the befuddled old man well, but had some wonderful glimpses of his old self in his interactions with Jack.

Turning to the technical side of the presentation: The set design by Bruce Goodrich, combined with the prop design of Katherine S. Hunt (FB), created a wonderful two-level house that appeared to be correctly dressed for the late 1940s. This was augmented with the costume design of Kate Bergh (FB) and the wig design of Marylin Philips to create a realistic place and characters for the story. The sound design by Martin Carrillo (FB) was impressive — particularly the directionality of the subway trains which far too easily could have come from the same speakers as everything else. Leigh Allen (FB)’s lighting also worked well to focus attention when required. Donna Hosseinzadeh (FB) and Amandla Jahava were the assistant directors; Lee Martino (FB) provided the choreography; and Jennifer Palumbo/FB was the stage manager.

“Broadway Bound” has been extended, and continues at Odyssey Theatre Ensemble (FB) until September 28. I’d get your tickets through the Odyssey box office; it is sold out on Goldstar.

Upcoming Theatre and Concerts:  Tonight brings a new musical, “It Happened in Roswell: An Intergalactic Musical” at the No Ho Arts Center. Next weekend we’ll be on vacation in Escondido, where there are a number of potential productions… out of the many available, we have picked “Two Gentlemen of Verona” at the Old Globe on Sunday, 8/24, and “Pageant” at the Cygnet in Old Town on Wednesday, 8/27.  I’ll note that what they have at the Welk (“Oklahoma“), Patio Theatre (“Fiddler on the Roof“), and Moonlight Stage (“My Fair Lady“) are all retreads and underwhelming. August will end with “An Adult Evening of Shel Silverstein” at REP East (FB). September is filling out. So far, the plans include “Earth/Quaked starring Savion Glover” as part of Muse/ique in Pasadena on Sun 9/7,  “Moon Over Buffalo” (Goldstar) at the GTC in Burbank on Sat 9/13, “Bat Boy: The Musical” at CSUN for the Friday night before Slichot (9/19), “The Great Gatsby” at Repertory East (FB) on Sun 9/21,  “What I Learned in Paris” at The Colony Theatre (FB) on Sat 9/27. October, so far, only has one show: “Pippin” at the Pantages (FB) on 10/25, although I’m looking at “Don’t Hug Me, We’re Married” at the Group Rep (FB) for either Sat 10/11 or Sat 10/18 (when Karen is at PIQF). November is back to busy, with dates held or ticketed for “Big Fish” at Musical Theatre West (FB) on Sat 11/1, “Handle with Care” at The Colony Theatre (FB) on Sat 11/8 (shifting to avoid ACSAC), a trip out to Orange Empire Railway Museum to see my buddy Thomas on 11/11,  “Sherlock Holmes and the Suicide Club” at REP East (FB) on Sat 11/15, the Nottingham Festival on Sun 11/16, and “Kinky Boots” at the Pantages (FB) on Sat 11/29. As for December, right now I’m just holding one date: “She Loves Me” at Chance Theatre (FB) in Anaheim on 12/20. As always, I’m keeping my eyes open for interesting productions mentioned on sites such as Bitter-Lemons, and Musicals in LA, as well as productions I see on Goldstar, LA Stage Tix, Plays411.