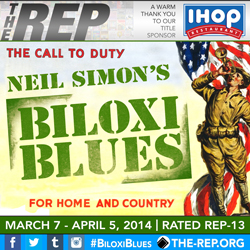 Recently, we lost one of the world’s great comics, Sid Caesar. Sid Caeser was known for “Your Show of Shows“, which is where some of the best comedy writers in the world got their start. One of these writers was Neil “Doc” Simon, who at one time was one of the most popular comedy playwrights writing for Broadway. Perhaps you’ve heard of “The Odd Couple“? But Neil Simon seems forgotten these days; you rarely hear of his plays and shows. Luckily, small theatre companies love his work because it is still funny and still speaks to people. Of course, I’m talking about this because last night we were at Repertory East Playhouse (FB) in Newhall (Santa Clarita) to see on of Neil’s plays, “Biloxi Blues“.

“Biloxi Blues” is the middle play in Simon’s so-called Eugene Trilogy — a set of three plays all about Eugene Morris Jerome (who represents Neil Simon when he was younger). The plays are “Brighton Beach Memoirs“, “Biloxi Blues“, and “Broadway Bound“, and I originally saw all three of these plays when they were first produced at the Ahmanson Theatre here in Los Angeles. Trilogies, or even larger forms of multi-play groups (such as the August Wilson’s “Pittsburg Cycle”) are very rare in theatre; forced sequels to plays and musicals typically fail big time (cough, “Bring Back Birdie”, cough, “Best Little Whorehouse Goes Public”, cough, “Annie 2: Miss Hannigan’s Revenge”).  “Biloxi Blues“, in my eyes, suffers from a common trilogy problem — as the middle of the story, it has no beginning and end of its own per se; it seems to be engineered more to move the main character from one spot and story in his life to another spot and another story to be told. Indeed, if you look at the character arc for Eugene in Biloxi Blues, you’ll see very little change and growth in Eugene’s character through the story: at the beginning his is a writer observing and chronicling his world, and at the end of the story, Eugune is still a writer observing and chronicling his world. You want character growth for Eugene, you need to look at “Brighton Beach” and “Broadway Bound“. So what is Biloxi Blues really about?

“Biloxi Blues” tells the story of Eugene’s foray into the Armed Services — his stint of basic training at Keesler Field, now Keesler Air Force Base, in Biloxi, Mississippi. As the story opens, we meet Eugene and most of his squad-mates (Roy Slridge, Don Carney, Joseph Wykowski, and Arnold Epstein) on their way to Biloxi from in-processing at Ft. Dix in New Jersey. When the story ends, it is with these same squad-mates in the same rail-car on their way back to the east coast to be shipped to the battle theatre. The character growth in the story is not that of Eugene Jerome, or even that of most of the squad; Biloxi Blues is really about what basic training brought out in Arnold Epstein.

When the squad arrives in Biloxi, they first meet their training sergeant, Merwin J. Toomey. Toomey is cut from the character cloth of sadistic basic training  sgts. who mold their men from individuals into killing machines, and from day 1 (day 0 if you are a C programmer) he has met his challenge in Epstein. All of the other squad members eventually give into to Toomey’s discipline, but Epstein stands his ground and does things his own way. Through the play, you see the method in Epstein’s madness; by the end, you see the final showdown between Toomey and Epstein and learn the eventual victor in the battle. Along the way to this battle, Eugene is constantly commenting and quipping on the army. There are also various vignettes showing life in the squad, and we get to see how Eugene has some milestones in his life — his first forey with a professional prostitute (Rowena), and his first forey into love with a girl he meets at a USO dance (Daisy Hannigan).  But these events change Eugene very little — he remains the observer on the side. But they provide the humor that powers the play.  This play is really about Epstein and Toomey.

So, ultimately, is the story good and satisfying? That’s a hard question to answer. It certainly is funny, although some aspects that weren’t a problem in the mid-1980s when this was written seem archaic today (such as the attitude of the army towards homosexuals during WWII). The battle between Epstein and Toomey is interesting to watch (especially its eventual climax). The rest of it is more a series of incidents observed with humor and only partially filling. It’s a good comedy, but not one of Simon’s greatest comedies.

Director Mark Kaplan (FB) and co-director Kimbyrly M. Valis (FB) bring out some great performances in the acting team. Leading that team is Craig Jorczak (FB) as Eugene Morris Jerome. Jorczak has Eugene’s accent down, and has the observer disconnection well.  He reminded me quite a bit of the original performers in this role, and that’s a good thing.

The main focus of this show, however, is the battle between Bear Manescalchi (FB)’s Arnold Epstein and Daniel R. Wolfe (FB)’s Sgt. Merwin J. Toomey. Wolfe’s Toomey brought out the right level of sadism and dominance, and Manescalchi’s Epstein had the required inner strength of stubbornly oppose him. This was brought to a head in the final scene between the two of them, where you got to see how Toomey’s training seemingly won out, but how Epstein’s inner strength of character ultimately won in the end. Very well acted.

Rounding out the squad were Daniel Lupa-Chazan (Roy Selridge), Alex Genther (FB) (James Hennesey), Darryn Gibbons (FB) (Dan Carney), and Ben Hopkins/FB (Joseph Wykowski). Hopkins’ Wykowski was very strong — you could easily see how this man was more muscle than brain (in contrast to Eugene and Arnold) — and Hopkins’ played him quite well. Another squad standout was Genther’s Hennesey. We meet Hennesey at camp, and the incidents around him serve less to grow his character as to provide opportunities for Epstein to grow and surprise. Still, Genther captured the gentleness and nature of the character well. Lupa-Chazan’s Selridge and Gibbon’s Carney were a little less stand-out-y as characters, but I think that is more the nature of how they were written in the squad, as opposed to their performances.

The remaining cast members were Alli Kelly (FB) (Daisy Hannigan) and Kimberly Patterson (FB) (Rowena). Patterson’s chacter, the well-worn prostitute, Rowena, appeared only in one scene can captured her well. More touching was Kelly’s Hannigan as the girl Eugene falls in love with — she brought a delightful tenderness and sweetness to the role.

Turning to the technical side: No credit is provided for the set, which served its function well to establish the Army barracks nature. The costumes were designed by Tonya Nelson (FB), assisted by Beth Ann/FB; Phil Wey/FB served as Historical Military Consultant and Stylist. It is here that I noted the only problems with the show. Although Wey got the treatment of the ties correct and the military positioning correct, the uniforms struck me as wrong from when I first saw them. Why? They were lacking the normal accoutrements one sees in Army uniforms — US insignias, soldier’s names. I initially thought they were also missing rank insignias as well, but the lowest level does not have any. Sound and lighting were by REP regulars Steven “Nanook” Burkholder/FB (sound) and Tim Christianson/FB (lighting), and both were effective. J. T. Centonze (FB) was the stage manager. Biloxi Blues was produced by Mikee Schwinn/FB and Ovington Michael Owston (FB).

Upcoming Theatre and Concerts:  The weekend of March 16 brings Purim Schpiels, with Sunday afternoon bringing “Inherit the Wind” at the Grove Theatre Center (FB) in Burbank. March 22 brings “Harmony” at The Ahmanson Theatre (FB), followed by “Author, Author: An Evening with Sholom Aleichem” at the Santa Monica Playhouse (FB) on March 23. The last weekend of March is open, and will likely stay that way as we’ll be exhausted. April starts with “In The Heights” at Cabrillo Music Theatre (FB) on April 5, and should also bring “Tallest Tree” at the Mark Taper Forum, as well as the Southern California Renaissance Faire. April may also bring “My Name is Asher Lev” at the Fountain Theatre (FB) (as this runs through April 19). Current planning for May shows “The Lion in Winter” at The Colony Theatre (FB), and “Cat on a Hot Tin Roof” at REP East (FB). As always, I’m keeping my eyes open for interesting productions mentioned on sites such as Bitter-Lemons, and Musicals in LA, as well as productions I see on Goldstar, LA Stage Tix, Plays411.