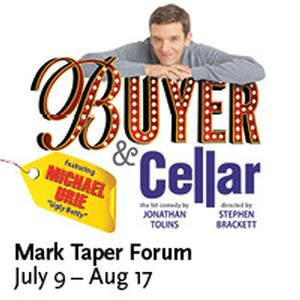 One of the most popular movements these days is the locavore movement. The notion is to promote sustainability by eating food that grown or raised locally. An offshoot program encourages people to shop from local merchants and support the local community, as opposed to buying products from no-name large corporations. This is a project that progressives love — in fact, one progressive went so far as to install a shopping mall in her basement, and she does all her shopping there. Well, that’s sort-of the premise of the comedy “Buyer and Cellar” by Jonathan Tolins, starring Michael Urie and directed by Stephen Brackett, now at the Mark Taper Forum.

“Buyer and Cellar” is a comedy that takes a “What If?” to its absurdist conclusion. In a book she published about home design, Barbra Streisand indicated she had collected so many items over her years that she arranged them into a collection of shops in the basement of her Malibu barn. What if, Tolins hypothesized, she actually formed them into a mall, and actually hired someone to staff the mall. That’s the basis of B&C — Urie’s character is an out-of-work gay actor hired by Streisand to staff the mall. When the Barbra finally shows up to shop, Urie’s character (Alex) makes a connection with the woman which grows and grows… until he ultimately figures out her ultimate purpose.

The show itself was hilarious. The premise is wonderfully abusrdist, and the stories told truly hit home for Los Angeles natives (who actually understand the amount of time the Santa Monica City Council spends debating parking at a Panera). When combined with Urie’s willing and warm (and natural) performance, it is a delight. I’ve noted in the past how I rarely laugh at shows. This one was truly laugh-out-loud funny.

I’m not sure how much else I can say about this one. The scenic design by Andrew Boyce was overly simple: A white room, with a chair, table and bench, augmented by video projections by Alex Koch that really added very little. I’d go so far to say that there was no scenic design, as it was the actor that created the sense of place, not the scenery, projection, or props (other than Streisand’s book). The sound design by Stowe Nelson was only visible in the wireless microphone stuffed down the back of Urie’s pants.  The lighting by Eric Southern was similarly simple.

Drew Blau was the company manager, Michael T. Clarkson was the production stage manager, and Hannah Woodward was the stage manager.

“Buyer and Cellar” continues until August 17 at the Mark Taper Forum. Tickets are available here.

Upcoming Theatre and Concerts:  This evening brings a Queen-emulation band at the Valley Cultural Center’s concert in the park. Next weekend brings “Broadway Bound” at the Odyssey on 8/16 (directed by Jason Alexander). I’m also thinking about a new musical, “It Happened in Roswell: An Intergalactic Musical” at the No Ho Arts Center on Sunday, 8/17. The following weekend we’ll be on vacation in Escondido, where there are a number of potential productions… out of the many available, we have picked “Two Gentlemen of Verona” at the Old Globe on Sunday, 8/24, and “Pageant” at the Cygnet in Old Town on Wednesday, 8/27.  I’ll note that what they have at the Welk (“Oklahoma“), Patio Theatre (“Fiddler on the Roof“), and Moonlight Stage (“My Fair Lady“) are all retreads and underwhelming. August will end with “An Adult Evening of Shel Silverstein” at REP East (FB). September is filling out. So far, the plans include “Earth/Quaked starring Savion Glover” as part of Muse/ique in Pasadena on Sun 9/7,  “Moon Over Buffalo” (Goldstar) at the GTC in Burbank on Sat 9/13, “Bat Boy: The Musical” at CSUN for the Friday night before Slichot (9/19), “The Great Gatsby” at Repertory East (FB) on Sun 9/21,  “What I Learned in Paris” at The Colony Theatre (FB) on Sat 9/27. October, so far, only has one show: “Pippin” at the Pantages (FB) on 10/25, although I’m looking at “Don’t Hug Me, We’re Married” at the Group Rep (FB) for either Sat 10/11 or Sat 10/18 (when Karen is at PIQF). November is back to busy, with dates held or ticketed for “Big Fish” at Musical Theatre West (FB) on Sat 11/1, “Handle with Care” at The Colony Theatre (FB) on Sat 11/8 (shifting to avoid ACSAC), a trip out to Orange Empire Railway Museum to see my buddy Thomas on 11/11,  “Sherlock Holmes and the Suicide Club” at REP East (FB) on Sat 11/15, the Nottingham Festival on Sun 11/16, and “Kinky Boots” at the Pantages (FB) on Sat 11/29. As for December, right now I’m just holding one date: “She Loves Me” at Chance Theatre (FB) in Anaheim on 12/20. As always, I’m keeping my eyes open for interesting productions mentioned on sites such as Bitter-Lemons, and Musicals in LA, as well as productions I see on Goldstar, LA Stage Tix, Plays411.