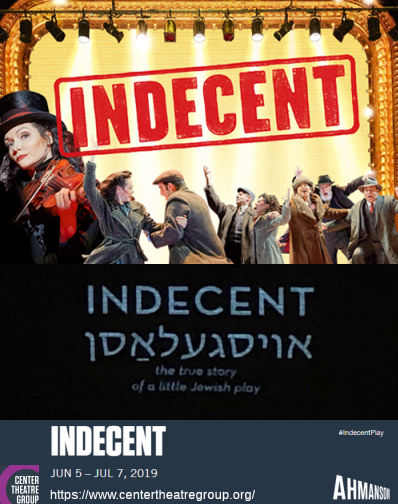 Over the last few weeks, a large number of my friends have seen the play with music Indecent at  the Ahmanson Theatre (FB), and have raved about the show. They’ve been telling me to see it. Unfortunately, my season tickets were the penultimate Friday of the run (yet another reason we’re not renewing — the Ahmanson isn’t as friendly as the Pantages on adjusting those things or having seats available), and we just hadn’t seen it yet.

We saw it Friday night, and I’m at a loss for words.

Indecent tells the story of the play God of Vengence, written by Scholem Asch around 1907. The play was notorious for featuring a lesbian kiss, prostitutes, a brothel, and an implied desecration of the Torah. The Yiddish theatre at the time though the play might be seen as antisemitic for portraying Jews in a less-than-positive light. But Asch persevered and got the play produced: first touring around Eastern and the Western Europe, and finally, the troupe came to America. In America the play was find as long as it was running in smaller off-Broadway theatres. But when it came to Broadway, American Jews protested the obscenity they thought was there, and had the actors arrested on obscenity charges on opening night.

All of this is done with a rotating troupe of actors and musicians playing all sorts of different characters, from the actors, to the authors, to the Yiddish intelligentsia of the time. It is supported by English and Yiddish subtitles, often indicating when characters would be speaking in Yiddish or English. It made numerous use of “A blink in time” to move time forward.

Was there a protagonist who was changed by this story? Arguably, Asch. Arguably, Lemmi, the stage manager. But arguably the entire troupe was changed in various ways because of the play.

Was there a point being made by this presentation and history lesson? Perhaps that the ideas we think are new really aren’t. Perhaps that we’ve attempted to censor theatre, but truth will out. Perhaps that nowhere is safe from the scourge of antisemitism, and perhaps the goyim only tolerate the Jewish world when we are acting safe and non-threatening. But threaten their Christian order and values, and face the consequences. Indeed, a survey out this week show that 20% of Americas still think it is acceptable to not serve Jews. Twenty percent! Is the antisemitism that Asch and his troupe faced gone from the world? Have we really learned anything?

This particular play came about when the playwright, Paula Vogel was at Cornell, and in the process of coming out, and her professor pointed her to the play. Twenty years later, the director Rebecca Taichman (FB) was at Yale, reading God of Vengence, when she gets the idea to stage the 1923 obscenity trial as her directing thesis.  The met, the ideas merged, and we have what we have on stage.

Unsurprisingly, given her history with this play, the direction by Rebecca Taichman (FB) was outstanding. Actors moved between characters and characterizations seemlessly, reactions seemed believable, and it just drew your attention. Choreography was by David Dorfman (⭐FB).

The the Hollywood Fringe Festival (FB) is almost over. If you are unfamilar with Fringe, there are around 380 shows taking place over the month of June, mostly in the stretch of Santa Monica Blvd between 1 bl W of La Brea to 1 bl E of Vine, but all generally in Hollywood. On a first pass, there were lots I was interested in, 30 I could fit on a calendar, but even less that I could afford. Here is my current Fringe schedule as of the date of this writeup. [Here’s my post with all shows of interest — which also shows my most current HFF19 schedule. Note: unlike my normal policy, offers of comps or discounts are entertained, but I have to be able to work them into the schedule with the limitations noted in my HFF19 post]: