With the Hollywood Fringe Festival (FB), you see a lot of shows. On top of the four shows (#10, #11, #12, #13) we saw on Saturday, we saw two more on Sunday. These shows continued the trend of Saturday, demonstrating the breadth of the types of shows you see at Fringe, as well as the varied reasons shows are put on. This time, what we had was a wonderful piece of performance art, and a real typical Fringe music, where the authors ask “What if?”, and then run with it. 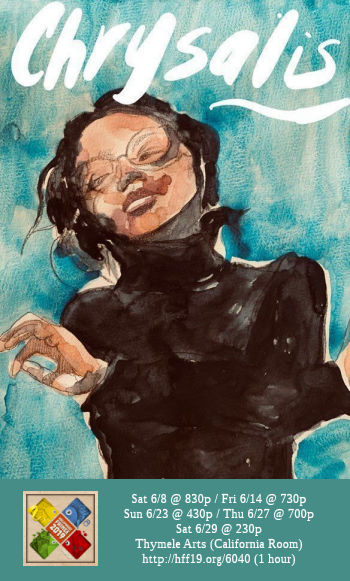 Chrysalis was an interesting piece. I was invited to the show by one of the producers, and I had no idea what to expect. The description was intriguing, and a bit inscrutable:

A deep exploration of the transitory state of life from a femme-identifying perspective. Self-written, self-thought, self-taught… Chrysalis showcases a collection of personal journeys through the different phases of self growth, and discovery. “She emerged from the chrysalis of self-conscious adolescence”

What Chrysalis turned out to be was what I could best characterize as a performance art piece: it was a collection of women sharing their personal stories of how they moved through the cocoon of adolescence and young adulthood to come out the other end with their own sense of self. The stories varied widely, from a woman who dealt with Plan B at Oral Roberts, to someone who traveled the world to find themselves, to families remembering recipes,  to … well, I can’t remember them all.  There was humor; there was sadness; there were stories; there was poetry. There was even a little song.

I also don’t feel qualified to assess the content of the piece, other than to say that I found it enlightening and entertaining. I was transfixed listening to the stories, and watching the faces and the bodies as the stories were expressed not only through words but through motion. But I am a guy, and a white guy at that. There were simply experiences in these stories that I could only empathize with from the outside; I could not assess the experience. So I’ll do what any smart guy does: turns to his wife. The following is her assessment:

It’s hard to sum up this piece, because many of the stories left me shell-shocked, and close to tears…In some ways,  I was sad that not much has changed over the last 30 to 40 years in the treatment of young women by those around them. The stories they were telling were way too similar to my stories (and my friends’ stories) of surviving the 1970’s. The difference is that these women found their way through to the other side, and found the freedom that comes with getting through to the other side.

Overall, I found this a very moving and touching performance — and I’m sure it would have been even more meaningful were I, shall I say, in closer alignment :-). My wife found it extremely meaningful. I think we both highly recommend it. There are two more performances: Thu 6/27 @ 700pm and Sat 6/29 @ 230pm. Tickets are available through the Fringe website. 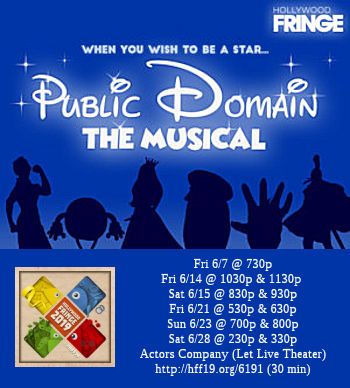 Our last show on Sunday, Public Domain: The Musical, was — in a sense — a perfect Fringe show.  It was clear that someone was sitting around going: what could we do at Fringe for fun. I have an idea. Let’s do a musical, but to avoid copyright and having to license a property, let’s do what D***** does: find a public domain property and milk the hell out of it. Hey, why not have public domain characters audition for a space in our musical! Yeah, that’s the ticket.

Out of less was a show born.

And so Sam Pasternack (FB) got busy. He wrote words. He wrote music. He wrote lyrics. He held auditions. The result was a a really cute Fringe show.

The basic conceit of the show: Two industry professionals (played by puppets) are holding auditions for a new public domain character to star in a story. A wide variety of characters audition: Rosie the Riveter, The Pea from Princess and the Pea, Potato Mussolini, the Monkey’s Paw, Oedipus. But in the end, they find their star at home.

The songs are all cute, but at times tastelessly cute. The performances are mixed, but your mileage may vary as the show is double cast. But you will be entertained, and in and out quick.

Turning to the production side: Ember Everett (FB) designed the clever costumes. There is no credit for the puppets. Isaac Alter provided music direction and orchestrations. The production was produced by Sam Pasternack (FB), Jason Merrin (FB), and Rachel Liu (FB).

There are two more performances of Public Domain: The Musical: Sat 6/28 at 230pm and 330pm. It’s a really cute show and a clever Fringe musical.