The second set of shows we saw Saturday, as I noted before, also demonstrate the reasons why someone produces a show at the Hollywood Fringe Festival (FB). Again, we had a larger-cast drama (A Night Out) and a one-woman show (Neighborhood Watch) . But there were difference this time. The ensemble drama wasn’t new: it was an established play from 1951, being presented to showcase a set of actors from the LACC Theatre Academy. The one-woman show wasn’t an established scripts, but a one-woman comedy telling stories about a neighborhood and its problems. 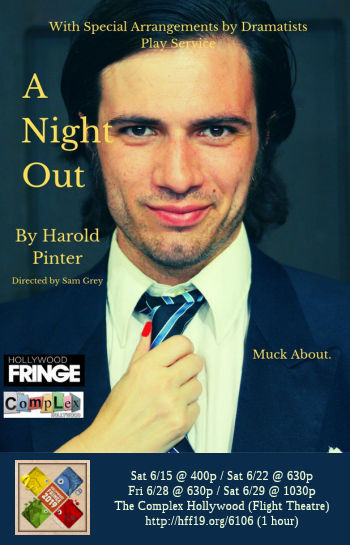 The third show of the evening was A Night Out, which is an early (1959) less produced play by Harold Pinter. We went to see it because we knew someone in the cast from our days subscribing at the late, great, Repertory East Playhouse in Santa Clarita.

A Night Out is a strange play. Wikipedia summarizes it thusly:

Albert Stokes, a loner in his late twenties lives with his emotionally suffocating mother and works in an office. After being falsely accused of groping a female at an office party, he wanders the streets until he meets a girl, who invites him to her flat, where he responds to her overtures by angrily demeaning her. Then he returns home to his mother.

Another summary I found captures the play a bit better: Alburt Stokes is not only henpecked by his mother, but by his friends. Even though he disdains interest in women, his friends push them on him as a joke. Even though it wasn’t he who groped the woman, his boss believed the accusation. When he gets called a Mother’s Boy, the rage within him outs, and keeps coming out to the end of the play.

That’s the story. But what’s the underlying point of the play? That’s much harder, and I think the answer is different  60 years later from when this play was first done. Back in 1959, the teasing and bullying was normal, and I think the focus was on the impact of the demented mother. But today?  You have a man who is not interested in girls — or boys for that matter — being pressured for it. In the closet asexual? Gay? Those wouldn’t have been notions in the 1960s. Then there’s the groping, which comes across totally different in the #metoo era than it would in 1959. There’s the whole issue of false accusations (Mr. Ryan clearly did the touching), and the reaction of people to it. Then there’s the behavior of the mother, who in the 1960s would appear to be the henpecker, but today seems to be clearly dealing with dementia and potential Alzheimers, and is just grasping for normalcy, a standard rhythm, and a pattern in life.

Today, this play would be reconsidered, and possibly have those points explored more. But for now, this is just slightly comprehensible early Pinter.

What makes this play standout are the performances, under the direction of Sam Grey (FB), assisted by Michael Macrae (FB). In the lead positions are Georgan George (⭐FB) as Mother, and Troy Rossi (FB) as Albert. We’ve known and seen George for years going back to when we first met her at REP. She’s grown as an actress, and was simply steller in this production, capturing the dementia and the tenderness of the character well, as well as those glimpses of something more. Rossi was very strong as Albert, presenting a wonderful simmering rage under the surface; an anger that just kept growing as people kept pushing and prodding at him. Both were mesmerizing to watch.

As The Girl (also Betty), Amy Kersten (FB) did a great job of portraying the British girl who was just looking for fun, and got more than she expected.

There are no credits given for scenic, sound, lighting, etc. The only production credits in the program are Jesse Fiene Stage Manager; and Crescent Hurley Asst. Stage Manager.

If I had one suggestion to make for this show, it would be this: Support your acting team. Find the space to duplicate a full page, double-sided program with short bios, even if it is black and white. Get all your actors to have profiles on the Fringe website, and have them linked on the show pages. Create a page for the show — even a free wordpress site — that has links to the pages on the actors. You’re not doing this show to sell an established play, but to sell and promote the acting talent in the play. Those people who like the talent need to be able to find them again.

A Night Out has two more performances: Fri 6/28 at 630pm and Sat 6/29 at 1030p. The story may be a bit incomprehensible (but, hey, this is Pinter), but the acting is top-notch and the show is worth seeing and trying to figure out. The show just needs to promote the wonderful actors better. Tickets are available through the show’s Fringe website. 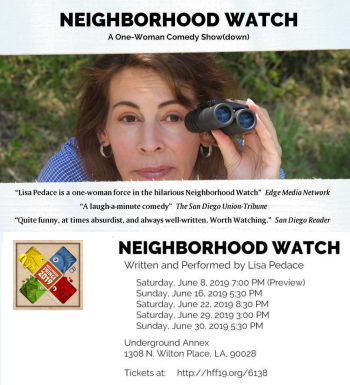 The last show we saw on Saturday was another one-woman show: Neighborhood Watch, written and performed by Lisa Pedace (FB). When I was first contacted about this show, I thought it would be something along the lines of Town Brawl, which we saw last week. Perhaps it started that way, but that’s not where it ended up.

Neighborhood Watch is ostensibly about a woman decrying the changes that have happened in her tract home neighborhood of almost 30 years. As President of her Neighborhood Watch, she’s seen the neighborhood changes from a community of like-minded people concerned about each other, to a neighborhood that only cares about itself: from the half-dog half-horse leaving turds on her lawn, the airbnb, the renters, and the people that just don’t care.

So far, so much Next Door territory.

But the story takes a sharp turn to the weird when the chickens move in. And when she starts recording them on her phone, and then starts playing them backwards to find hidden messages … you begin to wonder whether it is the neighborhood that has turned weird, or whether someone else has gone off the deep end.

Overall, the show is a great mix of humor and the weird. It holds your attention throughout, and is really fun to watch. Plus, they sell spices in conjunction with the show. It’s a long story. You’ll need to go to the show to see it, but I understand that the special spice is great on Chicken.

There are no other production credits given, and there were no programs handed out.

There are two more performances of Neighborhood Watch: Sat 6/29 at 300pm, and Sun 6/30 at 530pm. It’s a funny show, and worth seeing. Haven’t tried the spices yet. TIckets are available through the Fringe website.