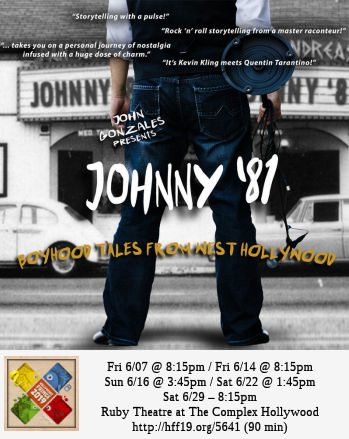 Fathers’ Day (and the end of the first formal weekend of the Hollywood Fringe Festival (FB)) brought two more shows: Johnny ’81 at the Complex/Ruby), and Town Brawl at Thymele Arts (although for the latter, I put it on my Google calendar wrong, and we got there 15 minutes late).

The first show, Johnny ’81 (HFF, WWW, FB) was not what I expected at all. Consider the description in the Fringe program:

It’s 1981! The corpse of DISCO, the flames of PUNK, the plastic smell of NEW WAVE, and the balls of ROCK ‘N’ ROLL, all converge and merge on a seemingly peaceful street in WEST HOLLYWOOD, CA, along with the stories of a 12-YEAR-OLD BOY raised by a PILL-POPPING SINGLE MOTHER and the many GAY MEN in their life.

I was expecting loud music, hard rock, and a pulse pounding story. What I got was… The Moth. And that’s a good thing, because I had a proto-headache and was worried.

Johnny ’81 was 90 minutes of storyteller John Gonzales (FB) telling a series of stories about his 12 year-old self growing up in West Hollywood, and the characters that inhabited his neighborhood and whose paths intersected with his life. That’s it. No more, no less. They showed a kid who was forced to grow up sooner perhaps than he should, but one where a wide variety of people demonstrated that they cared about him. It was proof about it taking a village to raise a child, especially when one’s parents weren’t always there.

The show was written by John Gonzalez, and produced by Denise McCrory (FB). Hannah McDonald was the stage manager. Monica Martin was the venue manager.

Johnny ’81 has two more performances: Sat 6/22 at 1:45 pm and 6/29 at 8:15pm. Give it a try; it is very different than the Fringe program implies, and well worth seeing. Tickets are available through their fringe page. 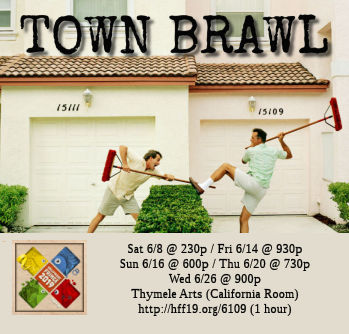 For Town Brawl, I must be upfront: due to my putting the show into my Google Calendar wrong, we arrived 15 minutes late. I’m not sure that made much of a difference. Town Brawl advertised itself as:

Inspired by the outrageous stories found on Nextdoor.com, Town Brawl is your chance to witness petty and absurd neighborly drama being settled in a no holds barred town hall meeting. If you hate your neighbors, you’ll love our show.

That really is what is was. When we arrived, we walked into a meeting in progress, with some guy complaining about the NextDoor posts with complaints about firecrackers and gunshots. He then made clear that it was he who was shooting off the offending items, and it got stranger from there. If you have ever read Nextdoor, then you know what I mean. There were neighbors complaining about everything: people snooping, people drawing penii around potholes (and badly drawn penii at that), people selling stuff. I’m just surprises there were no complaints about street vendors.

The show seemed to be a combination of scripted material and plants in the audience. It did a great job of making its points about how petty some of the discussions on Nextdoor are, and was funny in that aspect.

This was interesting immersive theatre. It was good, but had a very improvy sense to it. I don’t think walking in 15 minutes late hurt things in the slightest bit.