Back sometime in the late 1970s, my parents purchased a timeshare in Maui. This was one of the early timeshare developments, where one had a fixed interval; it was at The Whaler on Kaanapali Beach. Throughout my teen years, I regularly accompanied them to it (we had the last two weeks of August into early September) — I have distinct memories of coding for the UCLA Computer Club, listening to the Jerry Lewis Telethon, while sitting at the game table in the unit. All together now: Yes, I was a nerdy teen with no life.

As I got older, my parents continued to use the unit until sometime after my dad remarried (i.e., late 90s). The last time I was at the unit was in 1985, when we had a week at the unit as part of our honeymoon. After my dad stopped using the unit, he rented it out to friends and relatives. After my dad passed away and I inherited the unit, we did the same — my father-in-law regularly used the unit.

This year was our 30th wedding anniversary. Our daughter had a car, and was back up in Berkeley. We had nothing holding us back — we bit the bullet on the airfare. If you haven’t figured it out by now, this is where we’ve been for the last two weeks. You can learn about it here (although we’re not going through Aston), and (here and here) (these are folks that sell and rent units). 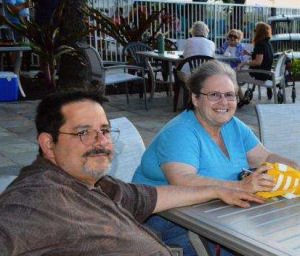 Pictures, you ask? Didn’t take any. However, other’s did, and if you look at this week’s AOAO Weekly Picture Mail (PDF), you’ll see both my smiling face, and my wife’s even prettier smiling face (AOAO is the apartment owners association — the folks that either own their apartments, or the TIOA  — independent of the units in the Aston rental program).

Just as an item of closure: Based on the recommendations of kyburg and other friends, we joined Interval International today. Hopefully, they’ll process the membership fast enough that we don’t bump into the 60-day window on depositing your weeks (that is, 60 days from the start of your weeks, which would be 6/22).

As you probably know by now, we own a timeshare in Kaanapali, Maui, Hawaii. We can’t use it this year, and no relatives or friends have expressed interest in renting the interval (8/22-9/5). So we’re narrowing in on our options. As always, I’m looking for opinions:

So, what do you think we should do? LJ friends—please let me know in the poll below. FB friends—please comment with your opinion (no obnoxious poll applications here):

1. The uproar is increasing on Facebook Privacy. I know a number of folks are recommending deleting your accounts. My position: I only make public on Facebook that which is public on Livejournal. Please, dear friends on Facebook, investigate your privacy settings, and be aware of what you are sharing and what applications know about you.

2. As a reminder, I’m looking for information on Interval International. Someone out there must have an experience to share.

The property manager at the Whaler suggested we might join Interval International and exchange our weeks at the Whaler. I’m curious whether any of my LJ or FB readers have experience with this organization? How does it work? What do you get for your membership fee? Have you had any problems?

A week ago, I posted information on our Maui timeshare. This is a reminder that I’m looking for someone to rent the unit. So please, check with your friends, relatives, etc. and see if anyone might be interested. My next step is to go with their rental agency. As a reminder:

The timeshare is at The Whaler on Kaanapali Beach.

The dates are approximately 8/22 to 9/3 (last two weeks of August). I’ll confirm the end date.

The unit is a 1 bedroom, 2 bath, with pull-out sofa in living room (floorplan)

In terms of amenities, just look at the Whaler Website: http://kaanapaliwhaler.com/ . The unit has a full kitchen, and DSL internet connection via modem and cable provided in the apartment. There are all sorts of recreational opportunities in the area, and of course it is on the beach.

In terms of price, my assessment was roughly $2,700. I’d love to break even on that, but I’m open to negotiations. I think the only other cost would be $12/day parking. I’d also be open to a trade for someplace the last two weeks of June.

Due to a combination of reasons*, we’re going to be unable to use our Maui Timeshare at The Whaler on Kaanapali Beach this year or next. I’m posting this note to see whether any of my Livejournal or Facebook friends are interested. Here are the specifics:

In terms of cost, I’m basically looking to cover my assessment, which was around $2,700. There is also $12/day parking, and might be a cleaning fee. I would be open to discussing arrangements, and perhaps even trading with someone who has a suitable time period or place available elsewhere (we would be available the end of June, specifically 6/21-7/2). If you’re interested or want more information, please drop me a note or message. If I don’t hear anything in a week or two, I’ll start talking to the rental folks at the Whaler.

* For the longest time I thought my uncle was going to use it, but he confirmed he wasn’t last weekend. We can’t use it as they have moved up the start of Erin’s high school to mid-August, meaning we can’t use it until she goes off to college.