Saturday was National Handwriting Day, but I didn’t realize it, so I’m doing it today.  National Handwriting Day falls each year on January 23, the birthday (according to the Gregorian calendar) of the American Revolutionary leader and first signer of the U.S. Declaration of Independence. To celebrate the occasion, people are sharing images of handwritten notes on social media using the hashtags #HandWritingDay and #NationalHandWritingDay: 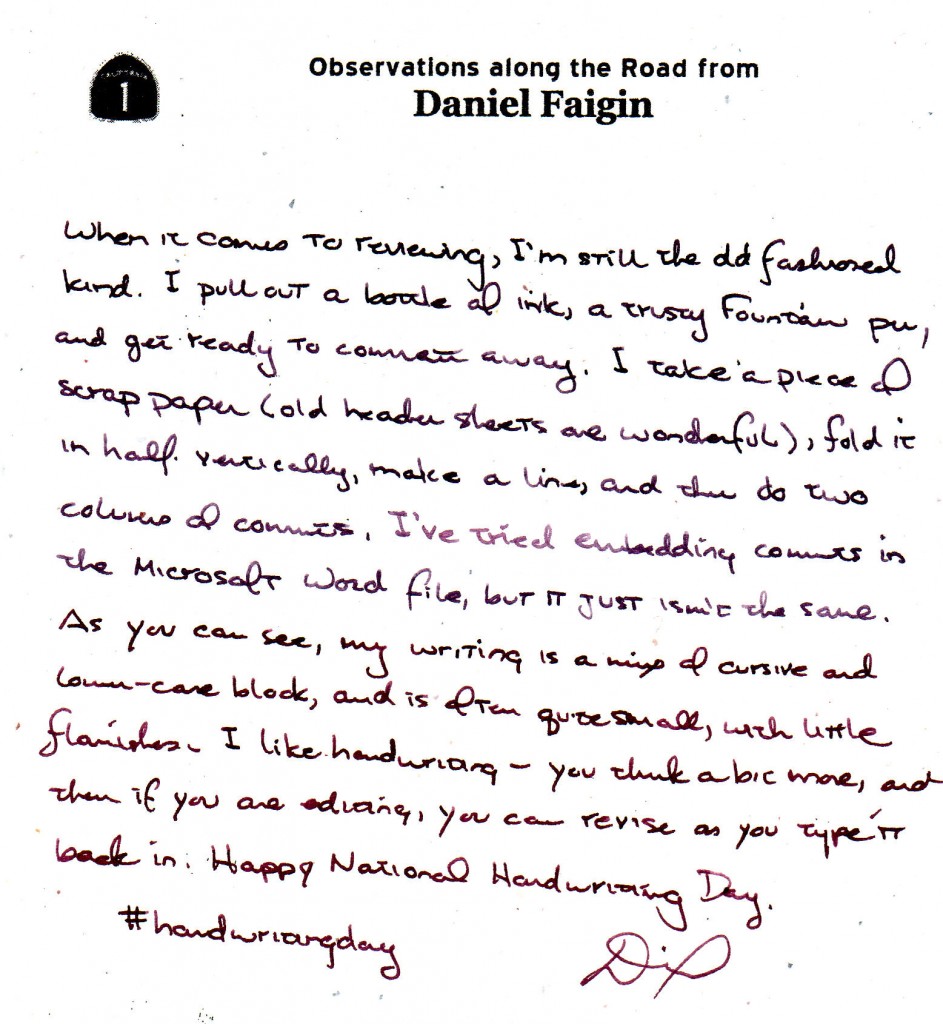 It’s Saturday, and that means it’s time to clean out the accumulated links.  As I’ve got about an hour before I jump into the Fringe, let’s get going:

It’s Saturday, and you know what that means — time to clear out the saved links for the week. As always, these links are usually discovered through my reading of the papers and by what comes across my RSS feeds (which I’m now reading via Newsblur):

I am now no longer buying Shaeffer Bottled Ink. Their new formulation and manufacturing process is crap. I’ve now had the second bottle of the new stuff mold up on me. An email complaint letter has been sent.

Does anyone know how to create a mold-inhibitor for inks?

My pens are much happier. New bottles of ink (Schaeffer Skrip and Parker Quink, as well as a bottle of Waterman Ink that is at home) that isn’t a mix, and isn’t a calligraphy ink pretending to be a fountain pen ink, even though it is too think and has shellac. The old ink has been flushed. The pens at my desk are much, much, happier, and I’m happier as a result.

Although we picked up the ink at The Fountain Pen Store, a good selection can be found at Pendemonium. I have Schaeffer Blue, Parker Red, and (old) Schaeffer Black (refilled from my dad’s quart bottle). Ahhhh. Penderful Happiness.

[One nice thing about semagic: You can write your entries even if LJ is down, and queue them up for later. Live Journal is still down as I write this.]

Even though I’ve been fighting a headache today, we did make it out to The Fountain Pen Shop in Monrovia. The shop is in this little industrial park, with a fountain pen museum in front. Lots of nice pens inside, and the owner is very personable. First, I had him look at the pens I bought for repair: 2 Parker 75s, 1 Parker 25, a Waterman, and two Rotrings. He fixed the cap of one of the Parker 75s on the spot. The other Parker 75 had a bent nib and needed cleaning, so it was left there, along with the Parker 25 and the Waterman, for cleaning. The Rotrings he couldn’t figure out: they seemed to be missing some assemblies, and were only usable as dip pens. So I’ll just use them as that (although I may test filling them with a dropper to see if they leak).

I then showed him my other set of collectables. My Parker 51 has a crack in the case, and can’t be repaired (but the nib is good, so I use it as a dip pen). The two Parker 45s are in prime condition, as are some of the Schaeffers. I’ve got a bunch of old Schaeffers and Parkers. I’ve also got some no-names that vary from good nibs to garbage nibs. We were able to fix the nib on the Esterbrook. Combining these, I’m now overflowing the pen case that ellipticcurve got me. So I’m keeping the nicer pens in that case, with the remainder in an aux case (for now). Pendemonium has some nice storage cases—in particular, a nice nylon 12-pen or 40-pen case—that might be great for the overflow pens I use less frequently. There’s also an interesting Schaeffer pen case here.
[Update: I’m ordering the 40-pen case from Pendemonium.]

After we left the fountain pen store, we drove through Monrovia, Temple City, San Gabriel, and San Marino, ending up in South Pasadena at the Fair Oaks Pharmacy. This is an old-fashioned pharmacy, with a real soda fountain, we had lunch and dessert there. At that point S&F was starting to melt-down from being over tired, so we headed home, driving up Fair Oaks (quite an interesting drive). She fell asleep about five minute from home (naturally), so she went out with gf_guruilla and saxylady to get saxylady a planner, allowing S&F to sleep more. Saxylady had an interesting morning, taking ellipticcurve out to get a new hairdo. Saxylady says it looks spectacular, so I’m looking forward to seeing it tomorrow.

Well, back to saying mi sheberachs for Live Journal!

Well, not having much else better to do this morning (well, I do have better to do, but the desire not to aggrivate my back is keeping me from doing it), I decided to clean all my fountain pens. So, I figured I’d count them as well. Let’s see (doing his best Count impression from Sesame Street): 1, 2, 3…. 30 Schaeffers, 15 Parkers, 3 Mont Blancs, 2 Rotrings, 2 Watermans, 8 unidentifiable manufacturer or hand-made, 1 Esterbrook, 1 Arnold, and 7 Rapidographs (although I also have some Rapidographs sets buried in the closet).