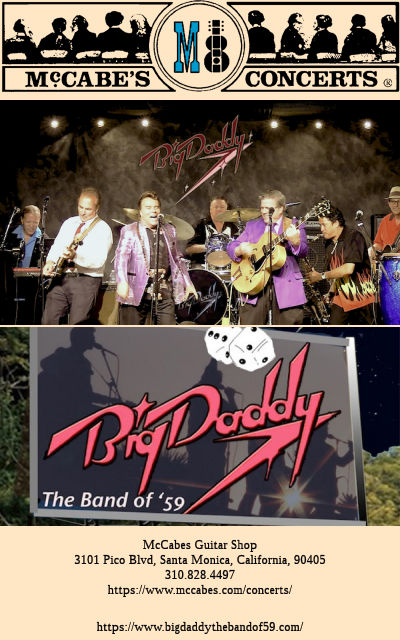 Perhaps I should clarify. I love music of all varieties. Rarely, however, does it fit current pop sensitivities. I particularly like music that is unique. That’s probably why Stuart handed me two albums over 10 years ago. The first was by a satirical bluegrass group called the Austin Lounge Lizards.  I was particularly taken by a parody of the Beach Boys titled “Hey, Little Minivan”. The second was an album that looked suspiciously like “Sgt. Peppers Lonely Hearts Club band”. But it wasn’t.

Rather, it was a cover of the entire Sgt. Peppers album by a group called Big Daddy. Big Daddy’s “origin story” (as concocted) was:

While on a USO tour of Southeast Asia in 1959, Big Daddy was captured by Communist forces and held captive until the mid-80’s at which time they were rescued by the CIA  and subsequently returned to the United States. While being held at Camp David for debriefing, they were given sheet music of contemporary hit songs so that they could re·build their repertoire and get back to the only work they knew… making music. Of course, not having heard the evolution of Rock music during the quarter century they spent imprisoned in the jungles of Laos, they arranged and performed these songs the only way they knew how … in the classic styles of the 1950’s.

So, imagine Sgt. Peppers as if it was done by top 1950s artists. Or, my favorite example of theirs: “Baby’s Got Back” in the style of Tom Dooley by the Kingston Trio.

I really do like unique bands. Perhaps that’s why I like Gangstagrass. Bluegrass hip-hop. But I digress.

Both Big Daddy and the Lizards are groups that I have followed over the years. I participated in Big Daddy’s kickstarter for an album of songs from Broadway and the movies. I see the Lizards whenever they are in town (most recently last November). But Big Daddy’s concerts always seemed to be on nights I have theatre tickets.

But not Sunday night. Sunday night they were at McCabes, in all their glory. And we were able to be at the concert.

To give you an idea of the songs they covered, here are the set lists. Alas, I’m not adept enough to identify all the specific styles, and I’m too old to remember which styles went with which songs:

The band was having real fun with these songs, with costumes and props and mannerisms. It wasn’t just a concert — it was a full-on show. From Johnny Cash in his 100 gallon hat, to three Elvii on stage, to Jose Feliciano, to … All the songs were entertaining. Two of them were new and written by the band: Be Bop Baby and Little Green Men. Both are from an upcoming radio series “Big Daddy, Band Out of Time”.  Little Green Men reminded me of one of the first songs I ever heard at McCabes: Shep Cooke singing “Concert Tour of Mars”.

For those that haven’t been to McCabes: It is a guitar shop in Santa Monica. In the back room, which seats around 100, they do all sorts of concerts.  I’ve been there for Tom Paxton, Noel Paul Stookey, Maria Muldaur, and many other folk artists. If you can see a show there, go. It is a wonderfully intimate space.

I look forward to Big Daddy’s next show, and hopefully the folks at McCabes will one day book the Lizards there as well.

P.S.: There was one additional bonus to the night: I got to meet Mark Evanier, who does the wonderful blog at Newsfromme. I’ve followed Mark for years as we have many similar interests, ranging from theatre to Los Angeles history and ephemera to animation history and especially all things Stan Freberg. It was Mark who helped organize the wonderful tribute to Stan Freberg 5 years ago (which I will never forget). Sometimes it is amazing the great people in Los Angeles.

This weekend brings Summer at the Hollywood Pantages (FB) and The Goodbye Girl at Musical Theatre Guild (FB).  November concludes with Bandstand at Broadway in Thousand Oaks.

December is getting busy, given that we lose two weekends to ACSAC, and the small theatres are often darker around the holidays. The weekend after ACSAC brings an outing of our new live theatre group at our synagogue to Eight Nights at the Anteaus Theatre Company (FB).  I also have a hold for December 21 for Elf at Canyon Theatre Guild.

Looking to early 2020: most of the January is currently quiet, but the middle of the month is busy, with What The Constitution Means To Me at the Mark Taper Forum, and Frozen at the Hollywood Pantages (FB) the third weekend, and Cirque Éloize at  the Soraya/VPAC (FB) the last weekend. Things start heating up in February, with The Last Ship (with Sting) at the Ahmanson Theatre the first weekend; A Body of Water at Actors Co-op (FB) and It Shoulda Been You at Musical Theatre Guild (FB) the third weekend; and (whew!)  The Simon and Garfunkel Story at the Hollywood Pantages (FB), Escape to Margaritaville at the Dolby Theatre/Broadway in LA (FB), and Step Afrika at the Soraya/VPAC (FB) the fourth weekend. Yes, that is the Pantages and the Dolby the same day — that’s what I get for not entering season tickets on my calendar before ticketing a bonus show. March comes in like a lamb, with the first two weekends (2/29 and 3/7) being quiet… but goes out like a Lion. The 2nd weekend brings the MRJ Man of the Year dinner; the 3rd Morris’ Room at Actors Co-op (FB) ; and the last bringing Spongebob Squarepants at the Dolby Theatre/Broadway in LA (FB) and the MoTAS/TBH Seder. April is similarly busy: the 1st weekend is Mamma Mia at 5 Star Theatricals (FB); the 2nd is during Pesach and is open (but has Count Basie at the Soraya/VPAC (FB) the Thursday before); the 3rd is Once on This Island at the Ahmanson Theatre; the last is Hamilton at the Hollywood Pantages (FB), and the first weekend of May is Mean Girls at the Dolby Theatre/Broadway in LA (FB)