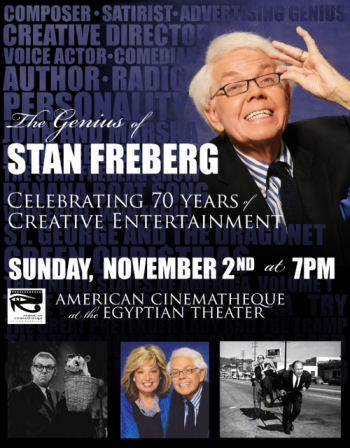 If you’ve been reading this blog for any amount of time (well, since before Columbus Day), you’ve probably figured out that I’m a big Stan Freberg fan. Early in October I learned through Mark Evanier’s blog that there was going to be a special tribute to Stan Freberg. So when tickets finally went on sale, I was first in the virtual line to get them. Last Sunday night saw us in Hollywood, surrounded by other Freberg fans (famous and non-), to pay tribute to the man.

Unfortunately, they tend not to hand out programs at tributes like these, but luckily Mark Evanier posted a summary of the evening. I won’t repeat all of it here, but suffice it to say that there were segments covering Stan’s animation work, his radio work, his recordings, his television work, and his advertising work, all followed by a short segment with Stan and his wife Hunter.

Yes, it seemed like everyone in the audience had memorized “Stan Freberg presents the United States of American  Vol I” when they were young.

There were a number of things I had never seen before, including works that I hadn’t known Stan had done. Two days out, here’s what I remember:

As expected, time did not permit including (or seemingly even discussing) some of the odder works, such as the 6 minute Butternut commercial that only mentioned the sponsor in the last minute (“Omaha”), Stan’s work on the Oregon Centennial, and Volume II of the United States of America (there will likely not be a Volume III).

The main sad thing about the tribute was the end, when Stan was on stage. Stan had recently broken a rib, and was in a wheelchair. They tried to have a segment where Stan would tell his stories, but Hunter had to keep prompting him and it was clear his memory wasn’t there. Whether that was the side effect of painkillers or something else, it was sad to see.

One additional comment: I’m not sure this is directed at the Cinematheque, or the event organizers. For a 7:00 PM event, at minimum, the box office and lobby should open at 6:00 PM, and the doors to the theatre no later than 6:30 PM. At this event, although we were told the box office was opening for will call at 6:00 PM, it opened at around 5:30 PM. Even more annoyingly, even though they said the lobby would open at 6:00 PM, people were kept waiting in line until 6:40 PM. Bad form.

Still, all in all, it was a fun evening. We even ran into someone we sorta-knew there: we ended up having dinner at the table next to Rabbi Wolf’s daughter-in-law and his grandchildren. The Freberg community must be like the security community: you keep running into people you know.

Upcoming Theatre and Concerts:  This coming weekend brings “Handle with Care” at The Colony Theatre (FB) on Sun 11/9 (shifting to avoid ACSAC and opening night), a trip out to Orange Empire Railway Museum to see my buddy Thomas on 11/11,  “Sherlock Holmes and the Suicide Club” at REP East (FB) on Sat 11/15, the Nottingham Festival on Sun 11/16, and “Kinky Boots” at the Pantages (FB) on Sat 11/29. I may also see some theatre when I visit my daughter Erin in Berkeley between 11/20 and 11/26. Right now, I’ve scheduled “Harvey” at Palo Alto Players (FB) in Palo Alto for Friday 11/21, and I’m looking at “The Immigrant“ at Tabard Theatre (FB) in San Jose, , “Rhinocerous” at the UC Berkeley Theatre Department (FB), or possibly a show at UC Santa Cruz featuring a family friend in the cast or crew. [As a PS on the above: I’m trying to figure out a way to balance “The Immigrant”, the show at Santa Cruz, and Dickens Fair on one weekend. Am I crazy?] As for December, I just ticketed “She Loves Me” at Chance Theatre (FB) in Anaheim on 12/20, and we’ll probably go see “Joseph and His Amazing Technicolor Dreamcoat” at Nobel Middle School just before ACSAC. Right now, there is only one show booked for January 2015 – “An Evening with Groucho” at AJU with Frank Ferrente. As always, I’m keeping my eyes open for interesting productions mentioned on sites such as Bitter-Lemons, and Musicals in LA, as well as productions I see on Goldstar, LA Stage Tix, Plays411.