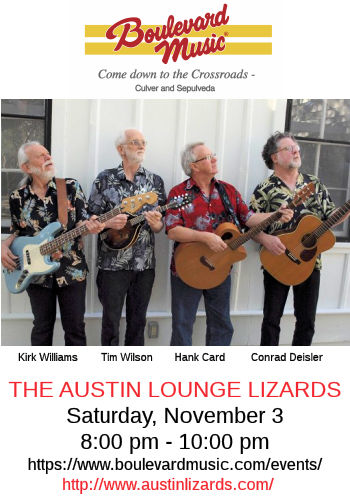 My dear departed friend Stuart Schaeffer did two outstanding things for me, musically: he introduced me to the music of Big Daddy, and he introduced me to the Austin Lounge Lizards. The Lizards are a satirical bluegrass band out of Texas, and their music is just great. Although described as “bluegrass”, they run the range from acapella choral singing to rock and roll, from the aforementioned bluegrass to country, and pretty much everything in between. Their lyrics skewer people and topics, and are cleverly written. Whenever we learn they are coming to town, we do our best to see them (but, alas, they often conflict with prescheduled theatre).

Luckily, although there was a conflict, it was with a subscription show, and we were able to change our tickets to Sunday. So last night we got together with some friends and went down to Boulevard Music in Culver City to see the current incarnation of the Lizards do their show. The Lizards are down to two of the three founding members (Tom Pittmann having retired, but Hank Card and Conrad Diesler are  still there), and have been joined by two original Lizards, Kirk WIlliams and Tim Wilson. For two songs, Corey Simone, who was also a former Lizard and now has a band in the area, joined the group.

To make my life easy, I copied their set list before the show. This show was a little different in that there were a number of non-Lizard rock numbers worked in between the traditional Lizards fare. Here is the set  list, with a few comments. I’ve done my best to get the full names of songs (non-Lizard songs in italics):

Alas, they didn’t do a number of my favorites, but that’s the nature of any show. What’d I miss? Saguaro, The Drugs I Need, Rasputin’s HMO, Go Ahead and Die (a great medley trio there), Industrial Strength Tranquilizers, Bust the High School Students, Big Rio Grande River, Half a Man, and Big Tex’s Girl… for a start.

But still, it was a great show, and you can never get all the songs you want.

Today brings She Loves Me at Actors Co-op (FB) a visit to Stitches So Cal.  The second weekend of November is very busy: Dear Even Hansen at the Ahmanson Theatre (FB) and A Bronx Tale at the Hollywood Pantages (FB), as well as A Day Out With Thomas at Orange Empire Railway Museum (OERM) (FB). The third weekend of November brings Beyond Jacobs Ladder from Jewish Woman’s Theatre (FB) at our synagogue on Saturday, and Finks at Rogue Machine Theatre (FB) on Sunday. Thanksgiving weekend has Steambath at the Odyssey Theatre Ensemble (FB) on Saturday and Remembering Boyle Heights at Casa 0101 (FB) in Boyle Heights on Sunday. December starts with the Annual Computer Security Applications Conference (ACSAC), followed by a hold for the Canadian Brass at the Saroya [the venue formerly known as the Valley Performing Arts Center (VPAC)] (FB). Then we may travel up to the Bay Area for Tuck Everlasting at TheatreWorks Silicon Valley (FB) (although that is starting to look less likely).