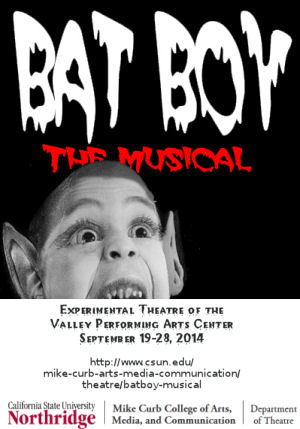 For those not familiar with the Bat Boy, he was a creation of the Weekly World News — a news source much like the Onion of today, only weirder. Half-man, half-bat, he was discovered in a cave in West Virginia. Constantly hunted by the government, he is regularly captured but escapes. The story first appeared in the pages of the WWN in 1992; by 1997, the Actors Gang had created a musical based on his story. This musical, with story and book by Keythe Farley (FB) and Brian Flemming, and music and lyrics by Laurence O’Keefe, made it to an off-Broadway production (which was recorded, permitting me to learn about it) and a London production. This fall, Janet Miller (FB) [who has done a great job with Good People Theatre Co (FB) productions of “A Man of No Importance” and “The Fantastiks“] selected “Bat Boy” as a production of the CSUN Theatre Arts Department. I learned about this production when I saw a poster for it while attending the Operaworks Advanced Artist production this summer. Having heard the music (which is great), loving the story (which has a great message), and knowing the quality of the director made this a must see. As soon as the ticket office opened in late August, I purchased my tickets for opening night.

[I’ll note an odd coincidence: Last night, I added yet another album to my iPod: the cast album for Heathers: The Musical, which just closed on Broadway. It turns out that Laurence O’Keefe did the music for that show, as well as for the Legally Blonde: The Musical. You’ll like the music to Bat Boy, especially the main song (“Hold Me, Bat Boy”) which is a definite ear worm.]

“Bat Boy: The Musical” takes place in Hope Falls, WV. As the production opens, Rick, Ron, and Ruthie Taylor are exploring some deep caves near the town. In one cavern, they discover the Bay Boy; as Ruthie tries to make friends with it, he bites her on the neck. They kick and capture the Bat Boy and take him to the Sheriff and Ruthie to the hospital. The Sheriff decides to take the Bat Boy to the local veterinarian, who will know what to do with him. The vet, Dr. Thomas Parker, isn’t home so they leave the boy with his wife, Meredith and their daughter, Shelly. Although Meredith wants to take care of the boy and make him part of the family, the daughter wants nothing to do with him. Mom wins out, and slowly starts educating the boy (who is a fast learner). When Dr. Parker comes home, he wants to put the boy down, but Meredith dissuades him from doing so with the promise of sex with her (which hasn’t been happening for a while). Meanwhile, the town is becoming agitated: not only is Ruthie Taylor not getting better, the coal mine has closed, and all of the cattle around the town are getting sicker and thinner. The town, naturally, blames the Bat Boy and believes that killing him will solve all their problems. Back at the Parkers, the Bat Boy (now renamed Edgar) and Shelly are growing closer, and Edgar is learning fast — he already has his high school equvalency diploma. He wants to attend the big revival meeting but the town doesn’t want him to. When Meredith and Shelly take him anyway, he wins the town over. But when Rick Taylor attacks Shelly, Edgar goes crazy and bites Rick. This starts the hunt for the boy, based on some turn of events and resulting in some disclosures which I won’t reveal (as they are spoilers)… but you can find them in the Wiki synopsis.

The story is a good one, and quite time. At its heart, it explores xeonphobia in a funny and touching way. The Bat Boy is the stranger in our midst — an uglier reflection of ourselves. Seemingly uncivilized, yet some can see beyond that to discover the civilized person underneath. Are they human? Are they animals? Do we blame the stranger for our problems, or are our problems often created by our own actions (after all, you can’t feed cows on a coal mine). Take this musical, which was written in 1997, and look at it through 2014. Muslims in our community are the Bat Boys of today — misunderstood aliens, seen by some as civilized members of society, but seen through ill-informed and ignorant eyes as all evils, prone to attack when provoked. I think this musical is much more timely today than when it was first performed.

This production — like many CSUN theatre productions — was excellent (I still have fond memories of an excellent production of Hair many years ago). Director and Choreographer Janet Miller (FB) worked with the students to bring out excellent dramatic performances — you could see that were intensely into each character they played. That’s not to say the production was 100% perfect, but it was very very good. Let’s look at the players.

In the lead position was Skylar Keck/FB as Edgar, the Bat Boy. Keck nailed the dramatic side of the performance, from his movement as the uncivilized Bat Boy to his maturation as the civilized Edgar. In the beginning you see Keck on all fours, running around and screaming gibberish. As the story progresses you see him grow into an Oxford-English speaking young man (BBC language tapes). He was really spectacular to watch. He also moved well during the dance numbers. If he had one drawback, it was that his singing voice was a little off on some of the numbers; I believe that will improve with time and practice. I look forward to seeing him in future professional productions.

In the other lead positions were Aubrie Alexander (FB) as Meredith Parker, Jessica Patterson/FB as Shelly Parker, and Jared Tkocz/FB as Dr. Thomas Parker. All three had strong characterizations of their characters — I was particularly taken by both Alexander and Patterson in their characters. Tkocz had the evil side down well as well. All three were also strong in their singing and dancing numbers.

Much of the remainder of the cast doubled or tripled roles, some going cross-gender. This initially confused me; my wife thought it had to do with the diversity statement in the program. It turns out neither was the case: it appears to be intentional double casting from the original production. In any case, given the multiple casting it is difficult to single out many performances. Some, however, are worthy of special note. I was very taken by Nick Bruno/FB‘s performance as Pan during “Children, Children”. He had a very strong singing voice combined with a winner personality that shone through the character. Bruno also doubled as Bud, one of the ranchers whose cattle were dying. Also strong was Matthew Kesner/FB as Reverend Bill Hightower in the “Joyful Noise” number — again, a strong singing voice combined with good movement and the ability to be humorous worked well. Kesner also doubled as Daisy, a schoolteacher, with a very incongruous look (I’d say you could guess why she was a spinster, but then again, this is West Virginia). Lastly, I liked Benjamin Schwartz/FB‘s portrayal of Sheriff Reynolds. My wife felt that Mrs. Taylor (Logan Allison/FB) deserved an award for overacting, but I think the character was intentionally written that way to play up the nature of the Bat Boy threat. Allison also doubled as Roy, a rancher.  Rounding out the townsfolk and remaining cast were: Steve Brogan/FB (Rick Taylor, spelunker; Mr. Dillon, a rancher); Rachael Johnson/FB (Ron Taylor, spelunker; Maggie, senior Town Council rep); Julia Alix Ober/FB (Ruthie Taylor, spelunker; Ned, a rancher); Sarah Kline/FB (Lorraine, a rancher’s wife; Clem, a townsman); Hyungwood Jang/FB (a doctor, ensemble/townfolk); Jessamyn Arnstein (FB) (a doctor, ensemble/townfolk); Chelsea DiBlasi/FB (Institute Man, ensemble/townsfolk); and Alexander Cody Phaphol/FB (ensemble/townfolk).

The actors were supported by an on-stage band behind the main set. This band consisted of Philip Matthew Park (Musical Director, Keyboard I), Paul Duffy (Keyboard II), Andi Moresi (FB) (Guitar), Dustin Morgan/FB (Bass), and Wayne Hildenbrand/FB (Drums). The band had a great sound quality, and about the only quibble was the reflection of the “Exit” light in the plexiglass surrounding the drummer.

Turning to technical side, where my main quibble with this production lies. Let’s start with the problem, and then move on to what worked. What didn’t work was the sound design by Kenji Kang/FB. When the microphones worked there was an odd echo quality to them; later on in the show there were numerous static and glitch problems. This could just be opening night problems — I see that Kang was a Van Nuys HS graduate, meaning he should have learned from the best (Marque Coy (FB)). Hopefully, they will get things tuned for subsequent productions. In contrast to the sound, the lighting design of Kevin Vasquez/FB worked quite well, creating a mood, illuminating scenic queues, and making good use of moving lights and LED lights. The costume design of Bich Vu worked well and appeared suitably West Virginia-y to me, although my wife had some problems with the footware on some of the actors. The costuming for the Bat Boy was particularly good. The scenic design of Christopher Scott Murillo (FB) was simple but effective, and made good use of the CSUN Experimental theatre black box space. Heidi Dippold was the dialect coach; her work was particularly notable in the Bat Boy’s gibberish and later BBC accent (I can’t speak to WV accents). Shad Willingham (FB) was the Fight Choreographer. Lindsey Martin/FB (as opposed to Lindsay Martens/FB) was the stage manager (yes, I did a double take for a minute).

Upcoming Theatre and Concerts:  Next weekend brings  “What I Learned in Paris” at The Colony Theatre (FB) on Sat 9/27, and “The Great Gatsby” at Repertory East (FB) on Sun 9/29. October currently has two shows (three if you count Yom Kippur on 10/4): “Don’t Hug Me, We’re Married” at the Group Rep (FB) on Sat 10/18 (when Karen is at PIQF), and “Pippin” at the Pantages (FB) on 10/25. November is back to busy, with “Big Fish” at Musical Theatre West (FB) on Sat 11/1, “Handle with Care” at The Colony Theatre (FB) on Sun 11/9 (shifting to avoid ACSAC and opening night), a trip out to Orange Empire Railway Museum to see my buddy Thomas on 11/11,  “Sherlock Holmes and the Suicide Club” at REP East (FB) on Sat 11/15, the Nottingham Festival on Sun 11/16, and “Kinky Boots” at the Pantages (FB) on Sat 11/29. I may also see some theatre when I visit my daughter Erin in Berkeley between 11/20 and 11/26. Right now, I’m looking at “The Immigrant“ at Tabard Theatre (FB) in San Jose, “Harvey” at Palo Alto Players (FB) in Palo Alto, or “Rhinocerous” at the UC Berkeley Theatre Department (FB). As for December, right now I’m just holding one date: “She Loves Me” at Chance Theatre (FB) in Anaheim on 12/20. As always, I’m keeping my eyes open for interesting productions mentioned on sites such as Bitter-Lemons, and Musicals in LA, as well as productions I see on Goldstar, LA Stage Tix, Plays411.