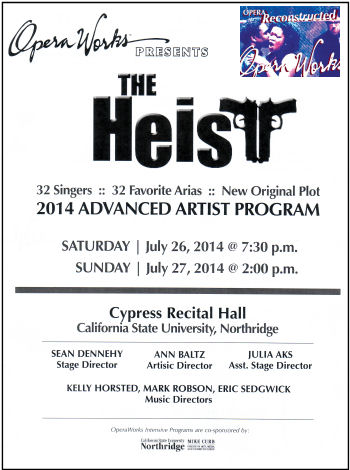 Two or so years ago, we discovered a really interesting program at CSUN. It is called Operaworks, and it’s goal is to make better Opera singers. The advanced artist program, which just concluded, has a slightly different specific goal: to teach opera singers how to “be” on stage. In their training, opera singers are taught to stand and sing in a formalized position. But to be effective in opera, they need to learn how to act — how to move, how to interact with others, how to tell stories with their movements, how to create personas that go beyond the areas. Each year in this program they bring together 30 or so graduate or newly performing singers. They come up with a theme, personas, and then select arias from their repertoires that might fit. They then improvise these areas into a through story, present two performances, and its gone for the year.

Today we saw the second performance. Sorry, you missed it. Try again next year.

This year’s performance was called “The Heist”. It was based on the story of an imaginary crime family called the Mezzos. I certainly won’t be able to tell you the full story, because I simply didn’t catch it all. But let’s try (and note that I’m doing this from memory, and was a bit drowsy from my migraine meds during the first act).

The first act was called “The Family Meeting”. It was essentially a cocktail party where different members of the Mezzo family were interacting. These included Giovanni Mezzo and his wife Holly. After a heist went wrong, Giovanni has gone into hiding. Holly is the mother of Amber Rose, Angela, Annie, Ricardo, and adopted son Angky. Annie lives in the bottle and is a hopeless drunk; AmberRose is the daddy’s girl; Angela is the caretaker of the family; Ricardo is the oldest son, trying to take his father’s place; and Angky, the adopted son who is betrothed to Anastasia, part of the family that killed Giovanni’s father. Also at the party is Rebecca Mezzo-Carminotti, widow of Giacomo Carminotti and younger sister of Holly. Rebecca is the mother of Tara, who on her last job killed a bank teller and is suffering from PTSD. Also at the party is Lauren O’Donnell Mezzo, Ricardo’s wife; Baby, who got caught up in the family; and Mark Markson, the family legal counsel and sometimes pianist. As the party goes on, we move from character to character seeing the interplay; the party concludes with the announcement that there is going to be one last heist.

The memorable performance in Act One was Annie Sherman as the drunk Annie Mezzo — she was just a delight to watch through the entire act, both as the drunk and how she interacted with others.

Act Two is the actual heist, and takes place at the Bank. The characters we meet here are Erin Desjardins, a student about to graduate from high school and her French cousin, Rachelle Desjardins; Manon Elias, a Kim Kardashian-type at the bank with her boyfriend, commercial real estate giant Andrew Gold. Mary Silverstein, the bank manager and Magdaline Small, the bank teller;  Katherine Sullivan, a high-school English teacher; Noel Strand and Sean Faust, the bank guards; Kelly the bank heist manager and her new robber Crystal; and Karlos Keys, a security guard who enjoys playing piano more. Most of the act is the interaction between the characters. When the heist occurs, the manager is forced to open the silver vault. Katherine organizes the guard and the others to overpower the watchman, and they storm the vault. During the melee, Samantha Mezzo is shot.

Notable performances in Act Two were Crystal as the naive thief and Erin White with her opening song. My wife liked the clueless bank manager (Mary Harrod) and Rahel Moore as the golddigger.

Act Three takes place at the hospital afterwards. The characters we meet here include the hospital personnel: Sangeetha Ekambaram the head nurse; Brenna Johnson, an RN; her husband Dr. Joe Johnson; and Eric Zingermann, the intake clerk who dreams of a bigger career on the concert stage. We also meet Sarah Westbrook, a gold-digging bored housewife who has secret assignations with Dr. Joe; Megan, a local hypochondriac; Alice Beurre a new bride and her maid of honor, Beth; Marina, the new clown doctor, and Tascha, whose father was injured picking strawberries. Lastly, there is the aforementioned Samantha Mezzo, who was shot in the heist. This act is mostly the interactions between the characters, concluding with Samantha’s death.

Notable performances in Act Three were Megan as the hypochondriac. My wife liked Brenna Casey.

Turning to the technical side, umm, well they didn’t say much. Sean Dennehy was the Stage Director, Julia Aks was the Assistant Stage Director, and Ann Baltz as the Artistic Director.

Upcoming Theatre and Concerts:  August starts with “Family Planning” at The Colony Theatre (FB) on 8/2. This is followed by “Buyer and Cellar” at the Mark Taper Forum on 8/9, and “Broadway Bound” at the Odyssey on 8/16 (directed by Jason Alexander). The following weekend we’ll be in Escondido, where there are a number of potential productions… including “Two Gentlemen of Verona” at the Old Globe, and “Pageant” at the Cygnet in Old Town. What they have at the Welk (“Oklahoma“), Patio Theatre (“Fiddler on the Roof“), and Moonlight Stage (“My Fair Lady“) are all retreads. August will end with the aforementioned “An Adult Evening of Shel Silverstein” at REP East (FB). I’m just starting to fill out September and October — so far, the plans include “The Great Gatsby” at Repertory East (FB), “What I Learned in Paris” at The Colony Theatre (FB), and “Pippin” at the Pantages (FB). November is also shaping up, with dates held for “Big Fish” at Musical Theatre West (FB), “Handle with Care” at The Colony Theatre (FB), the Nottingham Festival, “Sherlock Holmes and the Suicide Club” at REP East (FB), “Kinky Boots” at the Pantages (FB), and “She Loves Me” at Chance Theatre (FB) in Anaheim. As always, I’m keeping my eyes open for interesting productions mentioned on sites such as Bitter-Lemons, and Musicals in LA, as well as productions I see on Goldstar, LA Stage Tix, Plays411.