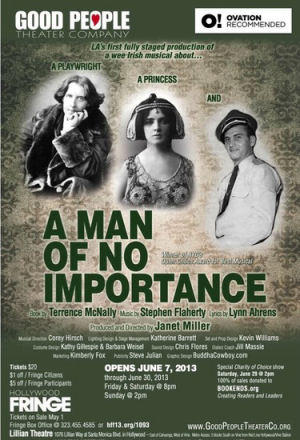 I tend to be a completist. For theatre, this means I tend to acquire all cast albums of a particular composing team. In practice, this means that I often jump at the chance to see a show I’ve only heard. So when I discovered that the Good People Theatre Company was doing a production of Ahrens/Flaherty‘s A Man of No Importance as part of the Hollywood Fringe Festival, I immediately went out an bought tickets. Well, I bought them for the wrong date, but I quickly got that fixed :-).

A Man of No Importance is one of A/F’s less frequently produced pieces, perhaps because it doesn’t work well in the gigantic Broadway houses. With a book by Terrance McNally, and based on the 1994 movie with Albert Finney, it tells the story of Alfie Byrne in 1964 Dublin. Alfie is a conductor on a Dublin bus line; his only joy in life is producing and directing amateur theatre  in the basement of St. Imelda’s church. His favorite playwright is Oscar Wilde, and he has just finished producing yet-another mounting of Wilde’s The Importance of Being Earnest.  When a beautiful young woman joins his bus route’s regulars, he instantly decides on the troup’s next show: Wilde’s Salome. Alfie’s sister, Lily, is excited about this news, for she believe it means Alfie is finally interested in a girl and might get married (meaning she can marry the butcher, William Carney). But Alfie is interested in the girl, Adele Rice, only as his Salome; his unspoken affection is for his bus driver, Robbie Fay. Alfie is hesitant to act on his attraction, knowing what happened to Wilde (although Wilde, in his mind, keeps urging him on, noting that the only way to deal with temptation is to give in). So Alfie focuses on producing the play, with the support of most of his actors. However, his main male actor, Carney, feels the subject of the play is too immoral for the church to produce. He goes to the leader of the church, Father Kenny, and gets the production shut down. This drives Alfie out in the world where he acts on his impulses… with predictable results.  This brings his secret out (“the love that may not be spoken”) to the world. However, instead of rejection and bigotry from his friends and family, Alfie discovers… acceptance (from all but a few).

If the musical has a heart — and a heart I hadn’t realized before I had seen the production — it is the closing number of Act I: “Love Who You Love”. This number occurs when Alfie walks Adele home one night, and she tells him of the man she left behind in her home town. It goes as follows:

There’s no fault in lovin
No call for shame
Everyone’s heart does exactly the same
And once ya believe that, you’ll learn how to say
I love who I love who I love
So just go and love who ya love

Such a beautiful song.

As for this production, under the directoral hand of Janet Miller (FB)… well it was just remarkable. I always find it wonderful when a production that wasn’t really right for the “big Broadway stage” works in a small venue. I’ve seen this in a number of shows: Kiss of the Spider Woman, The Story of My Life, The Wedding Singer, and many others. A Man of No Importance is one of those shows. Miller’s direction, a fine acting ensemble, and the correct under-99-seat venue combine to produce a gem of a show — one that touches and moves you (even in the wilting heat of a Southern California summer). Miller utilizes the limitations of the venue to great effect — there are no major set pieces — she establishes the scene through a collection of chairs, a bookcase, a table, and a few props. The performances she draws out are enough to mesmorize and transport you to 1964 Dublin without major fly-ins or backdrops. Just wonderful. As for the acting ensemble…

In the lead position, playing Alfie Byrne, is Dominic McChesney (FB). McChesney is perfect in the role: mild, expressive, and yet… powerful. He has a delightful singing voice, and does something I love to see in actors: he inhabits the role. By that I mean that when you watch the performance, you forget you are watching an actor — you believe you are seeing the character portrayed. When this happens, it is just great.

Supporting McChesney is a wonderful team of actors that seem to be having so much fun with their characters, it is infectuous. I’ll name some of my favorites first, and then list the rest. Playing both Carney and Oscar Wilde is David Gilchrist (FB). We’ve seen Gilchrist in a number of productions at Actors Rep of Simi and at Cabrillo, but he gave one of his best performances here. He was so expressive, and so much in character, that it was just a joy to watch him. I also enjoyed watching Marci Richmond Herrera (FB) as Miss Crowe. I don’t know what it was, but there was just something that drew my eye to her whenever she was on stage. As Adele Rice, Audrey Curd (FB) (G+) brought an inner beauty and strength to her performance that served her well when the reason was revealed at the end. Also particularly notable were the performances of Shirley Anne Hatton (FB) as Lily Byrne, Matt Stevens (FB) as Baldy O’Shea, and Keith Barletta (FB) as Robby Fay. Hatton’s Lily was wonderful in her duet “Books” with Gilchrist’s Carney, and Stevens was equally strong in his number “The Cuddles Mary Gave”. Barletta was just strong overall. Rounding out the excellent ensemble were Mary Chesterman (FB) (Mrs. Grace/Kitty Farrelly); Gail Matthius (Mrs. Curtin); Corky Loupé (FB) (Rasher Flynn/Carson); Michael P. Wallot (FB) (Ernie Lally); Melina Kalomas (Mrs. Patrick); Bret Shefter (G+) (Sully O’Hara); Matt Franta (FB) (Peter/Breton Beret); and Terrence Evans (Father Kenny).

The music in this production was excellent. Under the musical direction of Corey Hirsch (FB), the musicians from the Los Angeles Musicians Collective provided a great Irish band,  with a fiddle, flute, keyboard, guitar, and what looked like a mandolin, plus various boxes for percussion. They were just a delight to listen to. The Pantages should hire these folks when Once comes to town!

Turning to the technical and “behind the scenes” folk: The set and properties design by Kevin Williams was simple but effective, as I noted above. This befitted the fringe nature of the production, but also worked well to entice the audience to use their imagination to set the scene — something that movies cannot do. This was supported by the costume designs of Kathy Gillespie (FB) and her sister, Barbara Weisel (FB), (both formerly with the Costume House in Irvine) , whose wonderful costumes transported the audience to 1964 Dublin. Also effective was Katherine Barrett (FB)’s lighting design — both in the spots, but particularly in the backwash along the brick wall. The sound design by Chris A. Flores was what a sound design should be — unobtrusive and invisible, and you could hear the actors clearly. Dialect coaching was by Jill Massie and (to my ear) was quite good — it sounded convincingly Irish without being so heavy as to obscure the dialogue (which was, for example, a problem with both Billy Elliott and Priscilla at the Pantages). Katherine Barrett (FB) was the stage manager, assisted by Rebecca Schroeder (FB). I’m not listing all the publicity folks.

The last performance of A Man of No Importance is, alas, today at 2pm. As that’s less than two hours away as I write this, that means you can only get tickets at the door of the Lilian Theatre at 1076 Santa Monica Blvd (unless they are sold out). I’m looking forward to future productions from Good People Theatre (FB), especially if they are doing musicals not commonly done.

Upcoming Theatre and Concerts:  July starts with a musical we had originally planned for Fathers Day weekend: “Ionescapade” at the Odyssey Theatre Ensemble. That will be followed by “9 to 5 – The Musical” at REP East on July 14, and “Legally Blonde – The Musical” at Cabrillo at the end of the month. July will also (hopefully) see us as OperaWorks at CSUN. August is currently completely open due to vacation planning, although we may see a show at the Lawrence Welk Resort in Escondido at the end of the month (depending on price), or at another venue in San Diego.

Continuing the look ahead: September may bring Sarah Ruhl’s “In The Next Room or The Vibrator Play“ at the Production Company/Secret Rose and “Blue Man Group” at the Hollywood Bowl, as well as “God of Carnage” at REP East. October is open, but should the Cabrillo production of “Kiss Me Kate” somewhere, as well as “Dirty Rotten Scoundrels” at Actors Rep of Simi. November will bring “Play It Again Sam” at REP East as well as ARTS’s Nottingham Village (a one-weekend ren-faire-ish market). The fall should also bring a production of “Carrie – The Musical” by Transfer Theatre. As always, I’m keeping my eyes open as the various theatres start making their 2013/2014 season announcements. Lastly, what few dates we do have open may be filled by productions I see on Goldstar, LA Stage Tix, Plays411, or discussed in the various LA Stage Blogs I read (I particularly recommend Musicals in LA and LA Stage Times).