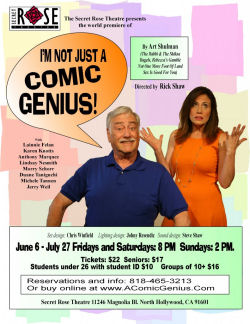 Some people wonder how I pick the shows that we see. The simple answer for non-subscription shows is that I see an interesting description that catches my eye, or it is from an interesting or known author. This, perhaps, I why I don’t go to many clunkers. In the case of last night’s show, back in April I received an announcement about a new comedy called “I’m Not Just a Comic Genius” by the fellow behind “The Rabbi and the Shiksa” about an older man who turned to playwriting after the death of his wife. It was being done at the Secret Rose Theatre, a venue that has put on good productions before, so I decided to fit it into the June schedule.  With all the Hollywood Fringe excitement in June, I’ve seen no mention, discussion, or reviews of the show. Hence, I was going into this show cold. Was it a success like the Vibrator play, or a Caligula-level disaster. You’ll have to read on to find out.

“I’m Not Just a Comic Genius” concerns an older man, David Gold, who has recently lost his wife of many years. As the play opens, it is the day of his unveiling. He hasn’t been out of the house for a year, and he’s not about to leave it now. He’s retired from accounting, is not a people person, and just wants to stay home. His daughter, Judith, keeps trying to get him back involved with life. She suggests, based on what her late mother told her, that he go back into writing plays. He grudgingly agrees. What follows is a series of one-act comic plays (really single scenes) interspersed with  scenes of Judith and David critiquing them. The comic scenes are broadly funny — there are scenes of a street memorial of a man with multiple lovers, a theatrical critique of a dense author, a sex fantasy with an interesting gimmick, an interesting story about a lemonade stand, an a wonderful parody of a spelling bee. Some made me cringe, but they got stronger as the show went on. This was presumably showing David’s growth as a writer.

At this point, you’re probably going — this is a slight show. It is an excuse to hang a bunch of comedy sketches on a light meaningless framework. That’s certainly what I was thinking about three-quarters of the way into the show. But then the last scene was revealed — a monologue from an older man at the graveside of his parents. This turned the entire play around: it added the necessary drama and pathos; it connected the scenes with father and daughter to show the growth that had been suppressed. In short: it is what made this play work. Reading the few other reviews I could find, that seemed to be a common sentiment.

The author of “I’m Not Just a Comic Genius“, Art Shulman (FB), is a prolific playwright in the Los Angeles area who is perhaps best known for his comedic Jewish plays. He’s also active in the senior playwriting community. Remember what I said about “known quantity” — this is one of them. I would think that many playgoers have an expectation from this author. Underlying everything, I think this play was a commentary about the author himself — I think it was Shulman reminding the audience that he’s not just a comic playwright. He wanted it to be known that there was something serious that he wanted to say as well.

So, now going back to my original question: was this a success or a failure. If you had asked me at intermission, I was leaning towards the failure side (although it was nowhere near the disaster of Caligula: The Musical). But by the end, I had turned around and moved this into the success category. This isn’t a Broadway caliber play, but it is cute and it has a heart. It has some very funny scenes (I particularly enjoyed the Lemonade Stand and Spelling Bee scenes, although the one-word-sex scene was funny as well) and a touching end, and it worth seeing.

The play was directed by Rick Shaw (FB) (jokes from “Adrift in Macao” just entered my head), who creatively used the limited space at the Secret Rose Theatre. It is evident he understands the space well; perhaps this is because he owns the theatre. I’m mentioning the director now, because one of the comic scenes in the first act dealt with the director interacting with the playwright, and commenting about how the director never seems to be in the theatre triad of author / actors / audience. When a show is bad, the director gets the blame; but when the show is good… I’ve noted this problem before: how do you separate the director’s contribution from that of the actor. For this play, I think, the answer is clear: there was some very clever staging and performances that were clearly the director bringing out the best in the actors.

In the lead acting positions were Morry Schorr (FB) as David, and Michele Tannen (FB) as his daughter, Judith. Both are very comfortable with their roles and characters; the personas worked well for them. Their performances were pleasant, with only the occasional line pause. That suffices up to near the end. Schorr’s performance in the graveyard scene was outstanding, and Tannen’s response after that scene was equally strong. Thus, just as with the show itself, the two leads had some surprises up their sleeves. (I’ll also note that I was surprised by the number of costume changes Tannen went through!)

The remainder of the ensemble was more of a comic troupe. Although they appeared early on as Judith’s friends, they morphed into a wide variety of characters throughout all the comic scenes. My favorite was Karen Knotts (FB) (daughter of Don),  who inherited her father’s gift for comedy. Whether it was as a grieving girlfriend, a theatre moderator, a frigid wife, a deranged blind date, or an 8-year-old lemonade stand operator, Knotts displayed a wonderful versatility, sense of comic timing, and playfulness that just shown through. She was a delight to watch. Duane Taniguchi (FB), was also quite strong, be it as a playwright, a man on a blind date, man buying lemonade, or a spelling bee contestant. Equally strong was Loren Ledesma (FB) in the other female comic roles: the younger grieving girlfriend, the hooker, the woman buying lemonade, or as a deranged spelling bee contestant. Rounding out the comic team was Jerry Weil as, among other things, a director, a cop/father, or the moderator of the spelling bee. These four worked very well together. Alternates were Anthony Marquez (FB) and Lindsay Nesmith (FB), who I don’t believe we saw.

Technically, the production was simple. Chris Winfield (FB)’s set design was simple, yet worked well, to handle all the comic scenes. The sound design by Steve Shaw/FB added the appropriate sound effects. The lighting by Johny Resendiz/FB was relatively naturalistic and unobtrusive. No credits were given for stage management or house management, nor for props or costumes. All seemed to work well, although Knott’s costume in the first few scenes was a bit strange (at least it caught my eye for a reason I couldn’t put a finger on). There was a credit for Kristina Krist for the website design, however.

Upcoming Theatre and Concerts:  July will be busy: “Ghost” at the Pantages (FB) on 7/5, “Return to the Forbidden Planet” at REP East (FB) the weekend of 7/12, “Once” at the Pantages (FB) on 7/19, “Bye Bye Birdie” at Cabrillo Music Theatre (FB) on 7/26, and “Family Planning” at The Colony Theatre (FB) on 8/2. August then remains quiet as we work around vacations and such (but I’m eyeing a number of productions in Escondido, including “Two Gentlemen of Verona” at the Old Globe, and “Pageant” at the Cygnet in Old Town. What they have at the Welk (“Oklahoma“), Patio Theatre (“Fiddler on the Roof“), and Moonlight Stage (“My Fair Lady“) are all retreads. Things start to get busy again in September and October, with “The Great Gatsby” at REP, “What I Learned in Paris” at the Colony, and “Pippin” at the Pantages. More on that later. As always, I’m keeping my eyes open for interesting productions mentioned on sites such as Bitter-Lemons, and Musicals in LA, as well as productions I see on Goldstar, LA Stage Tix, Plays411.