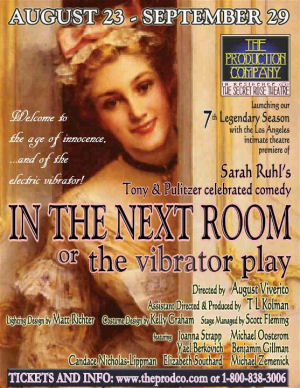 Vibrators and Sex Toys. What would the world be without them?

At the dawn of electricity, women often went to doctors for treatment of hysteria. This play tells the story of one such doctor, Dr. Givings, who has devised a new treatment for hysteria. He has developed an electronic vibrating devices that he administers clinically to eliminate the congestion in the womb that leads to hysteria. The play addresses the treatment of Sabrina Daldry, a woman suffering from hysteria and depressions. Daily administration of the device changes Mrs. Daldry’s mood immensely. The play also concerns the arc of Dr. Givings wife, Catherine. Catherine has just had a baby but has little milk, so she hires Mrs. Daldry’s housekeeper as a wet nurse for the infant. Catherine also forms a relationship with Mrs. Daldry, and becomes curious about what is happening in the next room.  Wikipedia summarizes the plot from there best: Both are excited to have their first orgasms with the machine. Mrs. Daldry is content to continue having clinical treatments with the machine and suffer lifeless, boring sex with her own husband. “I am afraid there is very little sympathy between us.” Catherine Givings wants more. First Mrs. Givings learns from a visiting artist that orgasms detached from love ultimately are unfulfilling and empty, simply surface, without soul, and similar to sex with prostitutes. Then her wet nurse, Elizabeth, reveals to Catherine that she may be able to enjoy the same sensations from the machine with her husband, with whom she is frustrated because of his clinical detachment, but still ultimately loves. Catherine first inspires jealousy and passion in her husband, then convinces Dr. Givings – who had earlier observed that “what men do not perceive because their intellect prevents them from seeing would fill a book” – to make naked snow angels with her and discovers the woman on top sex position, allowing her at last sexual satisfaction while the curtain lowers.

To me, a number of aspects of the story hit home. I saw in Dr. Givings the classic scientist: focused on the clinical, detached from the emotional. It took his wife thumping him on the head (essentially) to move him to a place of passion. It also demonstrated the power of healthy sexual outlets to create a positive mood. I was also impressed with how the story was told with propriety: this wasn’t a focus on the skin or the sex — it was focused on the story and the people, and how a new approach to orgasms affected them.

The Production Company’s production of  “In The Next Room“, under the direction of August Viverito (FB) (assisted by T L Kolman (FB)), did a very good job of telling the story. I’ve been to the Secret Rose for other productions, and this was the nicest set I’ve seen at the facility; this combined with actors that truly came across as their characters resulted in a production that was a delight to watch. The technical and performance elements of this show came together to draw the eye where it should be drawn, and to excite the spirit when it should be excited.

Of course, the top-notch performances didn’t hurt. All of the cast was just a delight to watch, so I’ll say that once and hopefully not repeat it (too much). The leading ladies, Joanna Strapp (FB) as Catherine Givings and Yael Berkovich as Sabrina Daldry, were just so full of passion and energy (especially after the “treatments”) that they were a joy to watch on stage. You really believed that they were their characters, and you couldn’t keep your eyes off of them. The male leads, Michael Oosterom (FB) as Dr. Givings and Michael Zemenick (FB) as Dick Daldry, gave off a different vibe. They came off as personable individuals who cared about their wives, in the same way they cared about anything in their domain. Again, this was a case of the actors inhabiting their roles, for that is the detachment common for men in that area. In other words: wonderful performances from all the leads.

The second tier of roles consisted of Candace Nicholas-Lippman (FB) as Elizabeth (the wet nurse); Elizabeth Southard (FB) as Annie (the doctor’s assistant), and Ben Gillman (FB) as Leo Irving (an male artist also being treated for hysteria — again, with vibrating equipment).  Nicholas-Lippman’s Elizabeth had a wonderful inner beauty that started out reserved and blossomed in her few appearances. Billman’s Irving was exuberant, to the point where you didn’t know if his walking into furniture at times was part of the act or overexcitement. Southard’s Annie was more in the background in the first act, but really shone in her later scenes with Mrs. Daldry later in Act II. Again, all great performances.

As I indicated earlier, the set design (which was by the director, August Viverito (FB)) was spectacular. August Viverito (FB) was also responsible for the sound design (although the program says lighting), which provided appropriate special effect noises. Lighting design was by Matt Richter (FB) assisted by associate lighting designer Caitlin Rucker/FB. The lighting design was particularly notable for the way it focused your attention on one room or the other. Costume designs were by Kelly Graham, and seemed appropriately period (although my wife noted some hems could use touching up).  Scott Fleming/FB was the production stage manager. No credit was given for the house manager.

Upcoming Theatre and Concerts:  I told you our schedule would fill up quickly. In the last week, I’ve added three shows. So let’s begin. The weekend between Rosh Hashanah and Yom Kippur sees us in Burbank for “Ordinary Days” (FB) at the Victory Theatre Center (FB).  The following weekend sees us in Santa Clarita for the Exit 81 production of “The Vagina Monologues” on September 15th at REP East (FB). The fourth weekend in September brings us back to North Hollywood for “Carrie That Tune” (great songs from flop musicals) at the Avery Schreiber Playhouse (FB) on September 22. We close September by returning to Santa Clarita and REP East (FB) for “God of Carnage” (September 28). Theatre in October starts on the 5th with “Breath and Imagination” at the Colony Theatre (FB).  The second week of October sees me at the West Coast Premier of “Burnt Street Boys“ at the Third Street Theatre (FB).  The third week of October is being held for the production of “Carrie – The Musical” (FB) by Transfer Theatre, but tickets are not yet on sale. October ends with the Cabrillo Music Theatre (FB) production of “Kiss Me Kate” (October 26). November will start (hopefully) with “Dirty Rotten Scoundrels” at Actors Rep of Simi (FB). That will be followed by a visit with Thomas the Tank Engine when we volunteer at OERM over Veterans Day.  The third week will be theatre-ish, as we attend ARTS’s Nottingham Village (FB) (a one-weekend ren-faire-ish market — tickets are now on sale). November will conclude with “Play It Again Sam” at REP East (FB) at the end of the month (November 23), and “Miracle on S. Division Street” at the Colony Theatre (FB).  December is mostly open, but should bring “The Little Mermaid” at Nobel Middle School, and “Peter and the Starcatcher” at The Ahmanson Theatre. As always, I’m keeping my eyes open as the various theatres start making their 2013/2014 season announcements. Lastly, what few dates we do have open may be filled by productions I see on Goldstar, LA Stage Tix, Plays411, or discussed in the various LA Stage Blogs I read (I particularly recommend Musicals in LA and LA Stage Times).