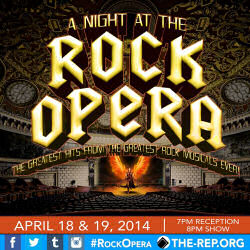 Last night, we went to go see “A Night at the Rock Opera” at REP East (FB), so I’m guessing you’re expecting the traditional write-up/review. But you’re not going to get it. There are a few reasons. First, there were no handouts, so I have no cast list to credit, nor a song list (or should I say “set list”) to give. Secondly, this was a fundraising benefit — so you don’t expect quite the same level as a well-established book show. Thirdly, we’ve got company coming over this evening, and I’ve already lost 6 hours to a headache. So, instead, a few observations.

Upcoming Theatre and Concerts:  The last weekend of April will bring Noel Paul Stookey at McCabes, as well as the Southern California Renaissance Faire. May brings “The Lion in Winter” at The Colony Theatre (FB), and “Cat on a Hot Tin Roof” at REP East (FB), as well as “Hairspray” at Nobel Middle School. I may also be scheduling “Porgy and Bess” at the Ahmanson. June is mostly open pending scheduling of an MRJ meeting, but I will try to fit in as much of the Hollywood Fringe Festival as I can. July will be busy: “Ghost” at the Pantages (FB) on 7/5, “Return to the Forbidden Planet” at REP East (FB) the weekend of 7/12, “Once” at the Pantages (FB) on 7/19, “Bye Bye Birdie” at Cabrillo Music Theatre (FB) on 7/26, and “Family Planning” at The Colony Theatre (FB) on 8/2. As always, I’m keeping my eyes open for interesting productions mentioned on sites such as Bitter-Lemons, and Musicals in LA, as well as productions I see on Goldstar, LA Stage Tix, Plays411.