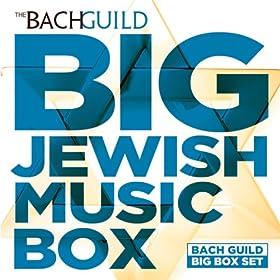 I originally highlighted this on Facebook a few weeks ago, but felt it should go here as well. I learned about this from my brother-in-law, and I purchased it about two weeks ago… and I’m still working my way through it. For 0.99, you get over 200 songs, 8+ hours of “Jewish” music. In reality, it is a mix of 1960s Israeli music (including a lot of Israeli dance song), loads of Yiddish, Klezmer, a few Russian folks songs (mostly drawn from albums published by Vanguard), and a Jan Peerce album about Passover. A real eclectic mix, but I’ve figured out what some of the source albums were — and some are rare and going for over $100 on Amazon, so the value is surprisingly tremendous. I have no idea when they will reprice this — it’s been up for a week. Here’s the link for the MP3 album. [ETA: It looks like they won’t reprice it — it seems this group’s deal is to create big collections of music that is out of copyright. What this likely means, for this album, is they are going from the original vinyl, as opposed to any CD reissues.]

The albums that seem to make this up (in whole or in part) are: