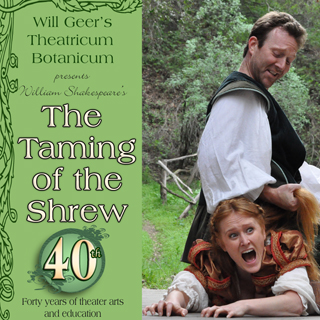 Earlier today, I wrote of a theatre piece that focused on a woman with a behavior problem: she was bipolar, and couldn’t let go of her grief. But women with problems have been the focus of theatre for ages. This afternoon I saw a much older theatre piece about another problematic women: “The Taming of the Shrew” by William Shakespeare. As is common with Shakespeare pieces during the summer, it was at an outdoor venue: Will Geer’s Theatricum Botanticum in Topanga Canyon.

First, a word about the venue. My wife had been to Botanicum back in the 1970s, shortly after it was founded by Will Geer and his wife, during the days he was on The Waltons. Botanicum is in a wooded canyon; the theatres are in little amphitheatres with outdoor stages and bench seating. Actors are anywhere and everywhere  — this is very much outdoor theatre of the 1970s, not the enclosed structures of today or the little black boxes. In many ways, this is theatre as it was meant to be: actors honing their craft, using their skill and not technology to tell a story. Batanicum is also very much a repertory company: the cast of actors are doing multiple plays concurrently over the summer — Shrew is just one of them. They are also doing Midsummers Night Dream, The Royal Family, Merlin, and Tone Clusters. It is a joy to watch, and we’ll likely be back for future productions.

Now, on to the show itself. If you are not familiar with Shrew, all I can say is go watch the “Atomic Shakespeare” episode of Moonlighting. You know — Bruce Willis, Cybil Shepard. Oh, right, you’re too young. Go rent Kiss Me Kate. As for me, the last time that I saw Shrew on stage was back in 2008 when it was part of Santa Clarita’s Shakespeare in the Park. I do love me a good production of Shrew, and this one was a fun one.

This production of Shrew established the mood early, with a madrigal group singing outside the line to the theatre. However, there was this annoying drunk wandering around trying to cadge a ticket and get someone to save him a seat. Somehow he succeeded, because as we came into the theatre, so did he. In fact, during the pre-show announcements he waltzed on stage and the house manager had to call security, but before they arrived, he collapsed on the steps. Just then, some hunters showed up (speaking the Bard’s good English), and decided to pull a trick on him. They would dress him as a king, and perform a comedy for him. And thus… the framing of The Taming of the Shrew.

As with much of Shakespeare, distinguishing all of the different characters is difficult (especially when there were some last minute substitutions). I’ll list them all in a minute. First, however, I’d like to highlight some particularly strong performances. In the lead positions were Willow Geer (FB) as Katharina and Aaron Hendry (FB) as Petruchio. You can see them pictured in the image above. These two leads were perfectly matched to each other. Hendry was athletic and charming, well built, and just fun to watch. Geer was a tiger-cat — able to pull out her claws and purr on demand. These two were just having fun with the role, and just a delight whenever they were on the stage.

Also strong, but not quite as stand-out-ish, were Christine Breihan (FB) as Bianca. She was charming, but didn’t seem to acquire a personality to the end. Also strong was the drunk, Christopher Sly (Gerald C. Rivers (FB)), who was doing a great job of fooling theatre patrons before the show, and was a delight to watch while he remained in character throughout the production.

The production was directed by Ellen Geer, who did a wonderful job of bringing out the fun in the production — these actors were having the time of their lives, and it showed. Stage management was by Kim Cameron/FB assisted by Brandi Martin. The costumes, which were very inventive, were designed by Val Miller/FB. Properties were mastered by Shen Heckel. Sound was by Ian Flanders, who likely coordinated the on-stage musicians that provided the sound effects. Lighting was by Zach Moore/FB, although our production had mostly natural light.

Taming of the Shrew continues in Repertory through September 29. It is well worth seeing. Tickets are available online; you might also be able to find them on Goldstar.

Upcoming Theatre and Concerts:  The last weekend of June brings a Maria Muldaur concert at McCabes, as well as “Man of No Importance“ (Hollywood Fringe) at the Lillian.   July starts with a musical we had originally planned for Fathers Day weekend: “Ionescapade” at the Odyssey Theatre Ensemble. That will be followed by “9 to 5 – The Musical” at REP East in the middle of the month, and “Legally Blonde – The Musical” at Cabrillo at the end of the month. July will also (hopefully) see us as OperaWorks at CSUN. August is currently completely open due to vacation planning, although we may see a show at the Lawrence Welk Resort in Escondido at the end of the month (depending on price), or at another venue in San Diego.

2 Replies to “Another Problematic Woman”