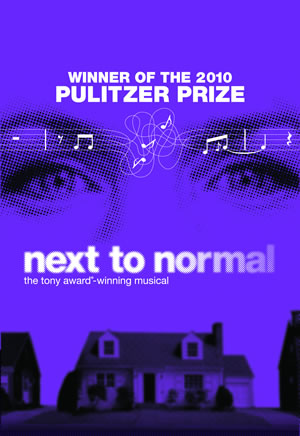 I can’t answer for everyone, but for me, I see different productions of the same show to find nuances, to see particular actors, and to see how different venues approach the material (especially different sized venues). I’m bringing this all up because last night I went to see a musical about mental illness; a musical that I last saw only a few years ago at the end of 2010. The musical is “Next to Normal” (music by Tom Kitt; book and lyrics by Brian Yorkey), and I decided to see it again because (a) I like the show, but more importantly (b) our experiences with the director and a number of cast members led me to conclude that this would be an excellent production. I wasn’t wrong — it wasn’t insanity to see “Next to Normal” again; rather, it was an experience that was well worth the drive (it was out in La Mirada, where we last saw Johnny Guitar in 2006) and provided additional insights.

As I’ve seen the show (and written up the show before), I’ll just repeat the synopsis I wrote up the last time. The story didn’t change from then:

“Next to Normal” tells the story of a dysfunctional family: the mother (Diana) who is falling deeper and deeper into the depths of her mental illness (bipolar); the father (Dan) who is attempting to hold it all together; the daughter Natalie who has been lost in the shuffle, and the son, Gabriel, who is the lynchpin for Diana’s illness. It is the story about how holding on to something too tightly can be just as damaging as not holding it enough… or at all. It is the story of how treating mental illness is not an exact science; although doctors offer a range of treatments from pharmacology to talk therapy to hypnosis to even stronger therapies, it is just throwing spaghetti on the wall. It is the story of Natalie and Henry, and how being in the middle of dysfunction and mental illness can affect a teen relationship… and how one can use substances to attempt to run away from problems, but it doesn’t help. Ultimately, it is the story of family, and that things don’t always work out how you expect them, but hopefully they work out for the best.

“Next to Normal” is such a great musical due to its honest treatment of mental illness. We see there is no cut-and-dried treatment. In “Next to Normal”, the triggering event for Diana is the death of her son at 8 months. She never lets go of the grief; rather, she embraces it and truly keeps her son alive in her mind, to the detriment of everything else. Although initially she could apparently cope (and even had another child shortly after), she began to lose it as her daughter got older. This impacted her daughter, for her mother never drew close to her. Diana’s husband, Dan, reacted in the other direction: he detached from his son, wanting to hide the memories away in a box, and live focused on the present. The latter (as the musical implies) is equally unhealthy, but is more acceptable to society. It also showed the differences in thinking for many men, who make a commitment to be there for the ones we love; good or bad, we hold things together.

(returning to the present) Every time I see this show, I see echoes of my life. I had a brother who died when I was ten; my mother went into a deep depression shortly thereafter that (I believed) colored her life thereafter and ultimately led to behaviors that killed her. Valium was indeed her favorite color. My wife has dealt with depression (successfully), and I’ve seen her mother deal with the inability to let go of grief. As I said the last time I saw this show: “The musical hits home for those that live with depression: the inability to get anything done and how that affects the family. It hits home with those who live with the manic side as well: the up-at-all-hours unpredictability that is equally taxing. This hits home—it is a deeply personal, touching musical.”

I also said last time — and I still agree — that Next to Normal is one of the best examples of a musical that needs the stage. Movies tend to be focused in the real (even if that is an alternative reality). What we see on the screen is realistic. Musicals allow the emotions to come out and be expressed, and Next to Normal is all about emotions. If you can find a production of this near you, it is well worth seeing.

As I wrote in the beginning, the primary reason I wanted to see this particular production was the director and the cast. I wasn’t disappointed. The director for this show was Nick Degruccio (FB), who has done numerous musicals in the Southern California area … all of which have been great. This show was no exception. Nick brought out the raw emotion from the actors, and connected with the audience (I know it brought out the emotion and me, and I heard others audience members saying something similar). If you have the opportunity to see something Nick directs, do it. The odds are good it will be excellent.

The casting for this production was spot on. Back in 2010, I saw the tour with the original Diana, Alice Ripley, in the lead. This production cast Bets Malone (FB) in the lead.  We’ve seen Bets in numerous productions at Cabrillo and throughout Los Angeles, and she is consistently one of the best musical performers in Southern California. She didn’t disappoint here — in fact, I think her performance was stronger than Ripley’s because she somehow made the performance and the character seem real and down-to-earth.

Also attracting us to the production was Tessa Grady as Natalie, Diana’s daughter. Tessa is another actor we see regularly in roles — we’ve seen her at the Colony and Cabrillo, and have always been impressed with her. She was very strong here, and gave a wonderful performance (I’m running out of superlatives) as the daughter.

Diana’s husband, Dan, was also played by Southern California regular, Robert J. Townsend (FB). We saw Townsend in the great production of The Story of My Life at Havok, and in numerous Cabrillo productions. Yet again — wonderful voice, wonderful performances.

Rounding out that cast — again, all with spectacular performances — were Alex Mendoza/FB as Henry, Eddie Egan (FB) as Gabe, and Keith A. Bearden (FB) as Dr. Madden. We’ve seen Mendoza before (Justin Love, Cabrillo) and Bearden (Johnny Guitar), but Egan was new to us. All were strong and a delight to watch.

Musically, the production was very strong, with musical direction by Darryl Archibald (FB) (another Cabrillo alumni). Archibald also conducted the 6 piece band, which included Archibald on piano, Dave Lofti on Percussion, Joe Jewell (FB) on Guitars, Shane Harry on Electric Bass and Acoustic Bass, Claudia Vanderschraaf/FB on Cello, and Tyler Emerson/FB on the odd combination of Violin and Keyboard.

The technical production was also excellent. The scenic design by John Ezell was reminiscent of the set at the Ahmanson, although lacking the eyes. I particularly noted how at points the background was cracked and imperfect. The lighting by Steven Young was also strong and effective, doing a wonderful job of creating the mood. The sound design by Josh Bessom provided clear and crisp sound (better than the production at the Ahmanson, where the orchestra overpowered at times), although there were a few static problems with the mics. The costumes by Kish Finnegan worked well with the characters, and the properties by Terry Hanrahan were effective. The prop/costume package were from the Arizona Theatre Company. David Cruise was the Technical Director. Jill Gold was the production stage manager, assisted by Phil Gold. The executive producers were McCoy Rigby Entertainment.

The last performance of Next to Normal is today, June 23. 2013. You can buy tickets online here.

Upcoming Theatre and Concerts:   Today brings more theatre: “The Taming of the Shrew” at Will Geer’s Theatricum Botanicum. The last weekend of June brings a Maria Muldaur concert at McCabes, as well as “Man of No Importance“ (Hollywood Fringe) at the Lillian.   July starts with a musical we had originally planned for Fathers Day weekend: “Ionescapade” at the Odyssey Theatre Ensemble. That will be followed by “9 to 5 – The Musical” at REP East in the middle of the month, and “Legally Blonde – The Musical” at Cabrillo at the end of the month. July will also (hopefully) see us as OperaWorks at CSUN. August is currently completely open due to vacation planning, although we may see a show at the Lawrence Welk Resort in Escondido at the end of the month (depending on price), or at another venue in San Diego.