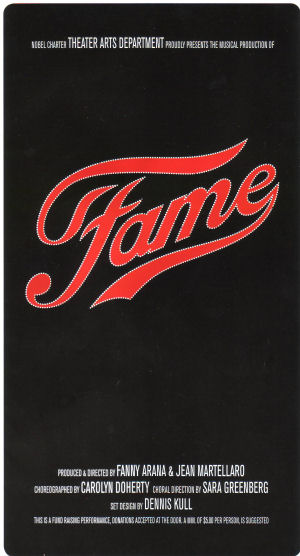 Back in 1980, I saw this wonderful movie Fame, and fell in love with the music. It was subsequently made into a TV series (which I also watched regularly). In the 1990s, the original producer, David De Silva, of the movie conceived of bringing Fame to the live theatre stage. For some reason (I can’t seem to find out why), he chose to have the story rewritten. The new book by Jose Fernandez, with music by Steve Margoshes and lyrics by Jacques Levy, rewrote the story along similar lines to the movie, but changed character names and a few plot elements. I had acquired the American cast album a while back, and so I was curious about seeing this version. Further, the version was being done by one of my favorite groups, the Nobel Charter Middle School Theatre Arts Department, so I just had to go see it.

Before I go on about the show (which we saw Saturday night), a few words about Los Angeles Unified and some special teachers. In any school and school district, there are teachers that change lives for the good. One of those is Cliff Ker, who runs the LAUSD’s Academic Decathalon program. Two others are Fanny Araña and Jean Martellaro, who run the theatre arts program at Nobel. Our daughter was involved with this program its first two years (2006-2007, 2007-2008), and it changed her life; the program has continued to change the lives of children for the good. It was demonstrated this year when a student at Nobel (Aria Doherty) died due to huffing. She was in the Theatre Arts program, and these two teachers brought the students together as family to help them move through and past the tragedy. We need some way to celebrate teachers such as these; we need more teachers like these two remarkable women.

Back to Fame: after years of doing more traditional musicals (Annie, Wizard of Oz, Grease), Nobel decided to tackle something much more complex: a musical about students at the high school of performing arts in New York … with music that was decidedly unknown to the students. They licensed the Fame Jr. version, which cut out some of the more problematic aspects of the story (the heavy sex references and the drug references), and had to further adapt the story when they lost one of the lead actresses (the aforementioned Aria had been cast as Mabel). They edited the story slightly, keeping the main plot and interpolating two numbers from the original movie. In general, the story worked well, although the larger cast did make it difficult to always figure out the characters and their personalities.

For those unfamilar with the musical version, you can find the synopsis of the Jr. version on the MTI page. Nobel further adapted the story by interpolating some additional songs, such as “Hot Lunch” from the movie, or a wonderful acapella version of “It Don’t Mean a Thing”.  The loss of the Mabel Washington character also meant the lost of “Mabel’s Prayer”; this resulted in a need to interpolate “Out Here On My Own” from the movie. Note that the Jr. version is decidedly tamer than the adult version; you can find the synopsis of the adult version in Wikipedia.

How did Nobel do with this? Well, one measure of the quality of the show is the audience. Usually at middle and high school shows, the audience is screaming and yelling when their family members come on stage. This audience was quiet. They were caught up in the performances and were treating this like fully professional theatre. I’ve only seen that at one other high school performance — when Van Nuys HS did Evita. The audience was believing these characters, and that says something about the performance.

That said, this was a middle school production. One doesn’t expect full Broadway quality — middle school kids (and especially middle school kids at a general education school) are not perfect. Voices will be off at times, dances will be off, and they are not experts at the acting craft. These aren’t professional actors, but students giving their all. Taking that into account, this was a very good performance. I’m not going to attempt to name every student in the extremely large cast and crew. But I would like to highlight a few.

First, I was just blown away by the performance and singing voice of Gianna Lowe as Ms. Bell, the dance teacher. She was just great. Also strong were the leads — Miaya May (Carmen Diaz), Andrew Lewis (Schlomo Metzenbaum), Berna Amet (Serena Katz), Jason Foster (Nick Piazza). All performed great, and for the most part, sang very strong. Also strong were the dance leads — Leanne Langston (Iris Kelly), Jeremiah Coleman (Tyrone Jackson). Another small role that I particularly noted (and I’m not sure who was doing this) was the drummer during the “Hot Lunch” number — he was particularly good. This was either Devon Delgado or Ben Goldman (they didn’t name which character it was). (As I side note, I did appreciate seeing the names of the movie characters as minor roles in this production). I’ll also note that the entire company was wonderful in the full choral numbers — I particularly liked the finale version of “Bring On Tomorrow”, which was just beautiful.

Technically, this production represented the continual evolution of the technical side of Nobel. There was strong lighting and reasonably good sound. The sets worked quite well, and the costumes seemed appropriately period.

Although there are too many students to name, some of the adult helpers are worth mentioning. The production was directed by Fanny and Jean. Choreography was by Carolyn Doherty (Aria’s mother). Sara Greenberg was the music director. Brian Bengler consulted on the technical aspects of the production. Set design was by Dennis Kull, and lighting design was by Rebecca Bonebrake.

Alas, we saw the last performance of Fame, although you can order a DVD of the show.

Upcoming Theatre and Concerts:   Next weekend brings “Falling for Make Believe” at The Colony Theatre. The last weekend of May brings “To Kill a Mockingbird” at REP East and The Scottsboro Boys” at the Ahmanson Theatre. June brings “Priscilla – Queen of the Desert” at the Pantages, and (tentative) Sweet Charity“ at DOMA (although DOMA may be replacing it with “Nine“). June will also bring a Maria Muldaur concert at McCabes.  July is currently more open, with “9 to 5 – The Musical” at REP East in the middle of the month, and “Legally Blonde – The Musical” at Cabrillo at the end of the month. August is currently completely open due to vacation planning. I’m also keeping my eyes open as the various theatres start making their 2013 season announcements. Lastly, what few dates we do have open may be filled by productions I see on Goldstar, LA Stage Tix, Plays411, or discussed in the various LA Stage Blogs I read (I particularly recommend Musicals in LA and LA Stage Times).