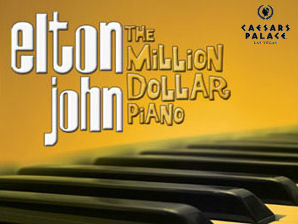 I’ve never been the rock concert type. In fact, I can only recall one rock concert that I’ve been too — in the early 1980s (perhaps 1982), a girlfriend took me to see Dan Fogelberg. Other than that, it has either been concerts at McCabes, the Greek, the Hollywood Bowl, the Universal Amphitheatre, VPAC, or similar venues…  and with artists that are decidedly not rock stars — PP&M, Tom Paxton, Judy Collins, BBVD, or various theatre artists. But when our daughter found out we were going to Las Vegas, she insisted that (a) we get tickets to Elton John at Caesars, and (b) we fly her out to join us for the concert.  As she has me wrapped around her finger, guess where we were last night? Yup. We were watching Elton John and his Million Dollar Piano last night at Caesars… and it was worth every penny!

I’ve always enjoyed Elton’s music. After all, I was in high school in the 1970s when his music was growing in popularity, and my college years were the height of the “Elton John in glasses” persona. I remember the stories of the flamboyant man, his glasses, and his costumes. But at the time, I only had one of his albums (“Blue Moves“). As I’ve gotten older, I’ve grown to like his music a lot more. I’m not a fan at the level my daughter is (but then again, I’ve never been the type to go fan-boy for anything, so it may just be me), but I do now have a sizable collection of Elton’s music, and I enjoy it all — both the older and the newer stuff. I think he is one of the best artists of my generation, and is a truly talented musician. All of this was demonstrated last night — the man and his music were just great. This wasn’t the flamboyant Elton of old; this was a man comfortable with where he is in life and truly enjoying entertaining his audience. It created a level of comfort and family in the concert hall, and led to a perfect evening. 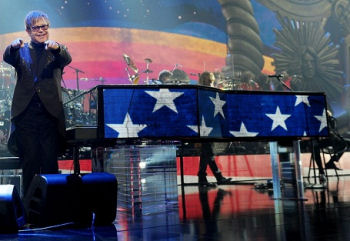 Let’s set the stage, at the center of which is Elton and his $1,000,000 piano. This piano is fully visual; it can show live or recorded video, animations and colors that follow the music being played using 68 LED video panels.  It is named “Blossom” after the late jazz singer, pianist and cabaret performer Blossom Dearie. Behind the piano on risers is the rest of Elton’s supporting band and his backup singers. The front of the risers are covered with more LED video panels, and the backdrop for the stage consists of even more LED panels. These all light up during the songs to reinforce the songs thematically, and sometimes all the panels were coordinated to provide stunning visual effects.

Unlike the early days of Elton, the man himself was not a visual effect. By that I mean that Elton did not have a flamboyant costume (just a suit with sequined shoulders, although he entered in a gold cape), nor did he wear outlandish glasses. He has moved beyond the need for such things — his music and lyrics more than make up for the lack of sequins.

The music he chose was primarily a rehash of his hits from the early days. I don’t believe he did any songs from the more recent side of his catalog. This made the audience happy as many of their favorites was there; still it would have been nice for him to introduce the audience to what he is working on these days. My supposition is that this is due to the venue — a concert stage in Vegas leads to a 90-minute intermission-less show designed to please the audience. Vegas — at least in Strip venues — is not conducive to a 3-hour two-act show that provides an in-depth review of the artists catalog, along with new unfamiliar songs. So what songs did Elton sing? Here’s the set list, along with my comments:

Elton was backed by an excellent backing band and singers. The band consisted of Stjepan Hauser and Luka Sulic (who are the group 2Cellos) on cello; John Mahon on percussion; Kim Bullard on keyboard; Matt Bissonnet on bass; Ray Cooper on percussion; Nigel Olsson on drums; and Davey Johnstone on mandolin and guitar. The backup singers were Rose Stone, Tata Vega, Jean Witherspoon and Lisa Stone.

Technically, a lot of well deserved kudos go to the lighting designer, Patrick Woodroffe, and the screen content producer, Sam Pattinson. This is on top of all the technical work that brought the tour together. The linked article provides a detailed description of the set design, its meaning, and how all the elements came together for this particular show.

Elton John The Million Dollar Piano plays for one more weekend at Caesars, and then returns in September and October for more shows. Tickets are available through the Caesars box office.

Lastly, one note on observed theatre etiquette. We come from a background of attending live theatre — musicals, plays, opera, and such. As such, we have one behavior we know in the theatre — we watch and focus on the performance, we applaud appropriately, etc. The concert-goer etiquette appears to be different — there is a lot more screaming at the stage, and (despite the warnings from the ushers) there was loads of flash photography and video recording. As usual, the culture clash can be a bit jarring.

Upcoming Theatre and Concerts:   Currently, the rest of May is relatively quiet. Mother’s Day weekend has nothing scheduled. The following weekend brings “Falling for Make Believe” at The Colony Theatre. The last weekend of May brings “To Kill a Mockingbird” at REP East and The Scottsboro Boys” at the Ahmanson Theatre. June brings “Priscilla – Queen of the Desert” at the Pantages, and (tentative) Sweet Charity“ at DOMA. July is currently more open, with “9 to 5 – The Musical” at REP East in the middle of the month, and “Legally Blonde – The Musical” at Cabrillo at the end of the month. August is currently completely open due to vacation planning. I’m also keeping my eyes open as the various theatres start making their 2013 season announcements. Lastly, what few dates we do have open may be filled by productions I see on Goldstar, LA Stage Tix, Plays411, or discussed in the various LA Stage Blogs I read (I particularly recommend Musicals in LA and LA Stage Times).