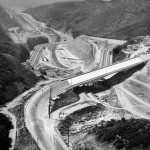 Today was the fourth (and last) installment of my Sepulveda Pass class (#3,#2, #1). Today’s class focused on the Jewish people and institutions of the pass, and why they are there. One of the points being made was that the pass is the current Los Angeles center for “mainstream Judaism”, defined as Judaism that has aspects of social action, pluralism, and ethnic pluralism (as opposed to purely humanistic Judaism or Orthodox learning). Here’s what I remember:

This led directly to our next speaker, Uri Herscher, President of the Skirball. Uri talked about the history of the Skirball, and how they were a very cramped museum with a large collection near USC. They needed more space, and looked at a lot of locations. One day while at an event at Wise, after having done a helicopter survey of the area, they settled on the location at the top of the pass, at the exit of the Sepulveda tunnel. This had been an informal dumping ground (he said when they started construction they had to remove 50′ of trash), on a narrow piece of land. They had to negotiate with three different landowners to acquire the property: Union Bank (representing someone who had gone backrupt), a Canadian company, and a local person. They eventually acquired the land for (IIRC) $3 million. They then worked with homeowner groups to build the present campus  into the available space. He indicated that one of the rationales for the location was easy access from the freeway. Ultimately, he said, the main reason they loved the space was that they weren’t alone: they were together with Wise and UJ, not an isolated Jewish institution. He also indicated that one of the changes when the Skirball moved was the transition from a simple museum to a larger cultural center, working with people from all cultures and celebrating all cultures. Uri felt that Jewish centers need to be more than just the holocaust and Israel. Thus… ethnic pluralism. It is also why the Skirball is more than just the main exhibit — it is classes, and childrens activities, and concerts, and programs, and school field trips.

Uri also related the story of how Rimerton Drive got renamed to Skirball Center. Rimerton was created as an artifact of the freeway construction. It turns out Jack Skirball was one of the people that gave Pete Wilson his start in politics as mayor of San Diego, so when the center, named after Skirball, wanted a sign for the center, Wilson helped grease the paperwork to get it done.

Uri also mentioned that after 18 years they may be revisiting the main exhibit. It appears that the current exhibit isn’t attracting as many people. Some in the class posited that was due to lack of interest in general Jewish museums. I felt it was more yet another negative impact of the Internet — younger people no longer feel the need to visit physical museums, when they can get their history over the Internet and from virtual visits. The implication of this is that museums must provide something that is not available over the network. Figure out what that is… and put it in.

All in all, this was a very interesting four week class. The instructor reminded us that there will be an exhibition coming up at the Autry on Jews in the Los Angeles Mosaic. I think I’ll plan to go to that.

Music: Seussical The Musical (2007 Off-Broadway Cast): “Horton Hears A Who”