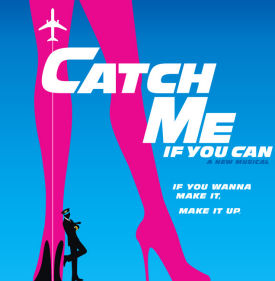 Last weekend, I wrote a rant about an editorial in Footlights denigrating the “blog critic” while promoting the professional critic. No where is that dichotomy more jarring than in the reaction to the show we saw yesterday afternoon, “Catch Me If You Can” at the Pantages.

“Catch Me If You Can” tells the story of Frank Abagnale, Jr., a notorious con-man, later turned FBI-consultant. It is based on the film of the same name. The musical simplifies the story somewhat (especially in the latter parts of the story). It also presents it in an odd fashion — as if it was a 1960s variety show (think Dean Martin) with loads of leggy dance girls, combined with a film-noir detective story.

The basic story itself concerns Frank Abagnale, Jr., the son of a con-man married to a French beauty he met during World War II. The families motto is, essentially, survive however you can, and that people look at the package and the impression, not the truth. As his father’s life crumbles around him, Frank learns to use this to his advantage, impersonating teachers and other leaders. When his parents divorce, he runs off to New York City and starts a life forging checks. He morphs from this life to a forged identity as a Pan Am pilot. This brings him to the attention of the FBI, particularly Agent Carl Hanratty, who start to chase him. They come close a few times, but Frank impersonates his way out of the encounters. Frank continues to morph, impersonating a doctor in Atlanta. Here he falls in love with a nurse, and to her family, pretends to be a lawyer. It is here that the FBI catches up to him… but his skills are such that the FBI ends up hiring him to advise on the very crimes he committed.

The reaction of critics to this piece has been mostly negative. The LA Times critic felt that the story was really asking the question, “How awesome would it be if the Rockettes dressed up in stewardess outfits? And, less fetishistically, perhaps, how cool would it be if Don Draper sang and danced?”. They essentially trash the show: “The show is structured so awkwardly — within a wincingly gag-filled book credited, incredibly, to Terrence McNally — that the songwriters can’t catch too much blame: There’s not a tune in the show that advances the story rather than just reiterating what we’ve heard in dialogue moments before.” They deplore its sexism: “We could reasonably say there is real sexism— not just a spoof of period sexism — in the way stewardesses are portrayed as pilot-hungry nymphs, and nurses as doctor devourers. Yet you hesitate to look a gift chorus line in the mouth, when these are the production numbers that jolt the enterprise to the life to which it constantly and frenetically aspires.” It’s not just the Times that is raking the show over the coals. Neon Tommy states: “The show itself is pretty mediocre. The score, by Marc Shaiman and Scott Wittman (“Hairspray,” “Smash”) is mostly uninspired and bland, though there are a fems gems, such as “Live In Living Color,” “Jet Set,” and “Goodbye.” Terrence McNally’s book is full of cringe-inducing bad jokes, and barely propels the story along. Further hampering the show are the distractingly garish projections and the show’s objectionable treatment of every single one of its female characters.” Examiner.com states: “Narratively and construction-wise, “Catch Me” is enough of a wet noodle that a powder keg of a central performance – any powder keg would do – might help distract viewers from realizing that this is 2.5 hours of not much there there. Besides the dancing and the leggy girls, that is.” The Hollywood Reporter states: “This impersonation of a Broadway musical initially convinces but eventually, inevitably, is revealed as ersatz. ”

In the article I mentioned last week, Peter Finlayson stated “But a true critic offers us insights that prompt us to come to a personal reflective choice, which is the fundamental core of theatre.” He stated that a good critic “will create a conversation about the play”, noting that they will “give us insight into whether the creative energies of a show were effective in presenting the final product.”. In many ways, this is like a judge at a Drum Corps competition. They focus on the technical aspects of a show: the construction, the nuances of performance. But this isn’t what the audience cares about: the audience cares about the General Effect caption, with performance and selection of material often taking a second position. They go to the theatre to escape, not to think. This is why many vapid movies succeed at the box office.

Your “peer reviewers” — the blog critics called “hacks” by Mr. Finlayson — provide an assessment of that General Effect caption first and foremost. In terms of General Effect, “Catch Me If You Can” succeeds. It has a strong brassy score that is fun, lots of dancing by performers who are enjoying what they are doing, with an orchestra that it top-notch. The performances of the actors are making the best of the material they are given. You walk out of this show humming the music, having enjoyed the past couple of hours. General Effective-wise, this is a win.

Yet the comments of the critics hold as well. There is a lot of sexism on the stage, but that’s viewing a presentation of an historical period through modern sensibilities. I was born in the 1960s, and the 1960s were sexist. If you watched Dean Martin or similar variety shows, you had equally leggy sexism, although not quite as integrated in the casting. I had no problems with the presentation through the eyes of a variety show. It reflected how the lead character, Frank Abagnale Jr, saw his life: a series of skits, where he assumed a variety of characters while doing a glamorous song and dance. Where the story-telling broke down was in the second half, where there tone abruptly changed to noir, and the focus of the story-telling voice switched from Frank to Agent Hanratty. We went from strong and brassy to ballads. Perhaps this paralleled the breakdown of Frank’s life, but it was jarring. These, in my opinion, are valid criticisms of Terrence McNally‘s book. As for the music (by Marc Shaiman) and lyrics (by Shaiman and Scott Wittman), I found it very enjoyable with a nice variety of styles. But then again, I’m enjoying the music they are writing for Smash as well.

What contributes to the winning general effect — and what elevates this show beyond the simple book — is the cast. Gone are the days when tours contained the same performers as the original production. That happened in the 1960s and 1970s when LA was more of a draw, and theatre performers wanted to come her. Today, it would be a surprise to get Norbert Leo Butz, Aaron Tevit, or Tom Wopat on a tour. We’ve got a lot of younger actors in training; actors who are willing not only to do the show in Los Angeles, but in Peoria and other small cities. Luckily, the folks at Joy Dewing Casting and Troika Entertainment assembled a strong ensemble for “Catch Me If You Can“.

In the lead positions were Stephen Anthony as Frank Abagnale, Jr. and Merritt David Janes as Agent Carl Hanratty. Both initially struck me as the wrong age — they seemed to be too young for the roles they were portraying. However, their performance won me over: they were having fun with their roles, and it showed. They made their roles work and work convincingly — which is the mark of a good actor. Although I would have truly enjoyed the originals, it is performances that make the show, not the original actor. They were also very strong singers and did great with the songs that they had. Most importantly, they played off of each other well. Anthony was particularly surprising — for someone so young, he was just wonderful.

In the second tier positions were Dominic Fortuna as Frank Abagnale, Sr., Caitlin Maloney as Paula (Abagnale), and Aubrey Mae Davis as Brenda. Fortuna did a great job of channeling Tom Wopat — with a similar voice and style, and played off well against Anthony’s Jr. Even more impressive was Aubrey Davis’s performance. She was just having so much fun with the role it was infectuous and made her stand out and catch your eye. Combine that fun with a remarkable singing voice… and you ended up with an actor that I look forward to seeing more of in the future. Maloney’s role was much smaller, but she handled her numbers well.

“Catch Me If You Can” was originally directed by Jack O’Brien; Matt Lenz was the associate director. Choreography was by Jerry Mitchell; Nick Kenkel was the associate choreographer. Not being a skilled critic, I found it hard to identify what the directors uniquely brought to this, but the overall production seemed to work well – so whatever they did, they must have done right. I did enjoy the choreography — the choreographers and the dance captains did a great job of making the best of the shortened space they had of the tour stage (the orchestra took up much of the depth, standardizing the stage depth and movement for the tour).

The production was very simple — or complex — from the scenic side. Dominating the scenery was a gigantic LCD project wall designed by Bob Bonniol.  This wall offered an ever-changing background that established location and mood. Some reviewers found it distracting — I found it clean and crisp and much better than common projection systems. The physical scenic design was by David Rockwell, which included the orchestra setting, the various flys, and the few set pieces and props. The costumes, by William Ivey Long, were very effective at not only establishing the time and place, but for showing off the physical talents of the dancers (i.e., they highlighted the legs very well). The sound, by Peter McBoyle, was unobtrusive and blended in quite well. The lighting, by Kenneth Posner, consisted primarily of moving lights and worked well to illustrate the movements and set the mood. Geoffrey Quart was the technical supervisor.    Donavan Dolan was the production stage manager.

“Catch Me If You Can” continues at the Pantages through March 24, 2013. Tickets are available through the Pantages website.

Upcoming Theatre and Concerts:   Next weekend takes us back to Newhall and the REP for “Boeing Boeing” at REP East on March 23. March ends with “End of the Rainbow” at the Ahmanson on March 30. April has less theatre — so far, only one show is scheduled. The first weekend of April is open. The next weekend brings with the Southern California Renaissance Faire.  Following that is “Grease” at Cabrillo Music Theatre, and April concludes with a winetasting at Temple Ahavat Shalom. May is busy in a different sense, with two concerts — Elton John in Las Vegas on May 4, and (tentative) Michael Feinstein at VPAC on May 11. May also brings “Falling for Make Believe” at The Colony Theatre and “To Kill a Mockingbird” at REP East. Lastly, continuing the look ahead, June will bring (tenative) “The Scottsboro Boys” at the Ahmanson Theatre, “Priscilla – Queen of the Desert” at the Pantages, and (tentative) Sweet Charity“ at DOMA. July is currently more open, with “9 to 5 – The Musical” at REP East in the middle of the month, and “Legally Blonde – The Musical” at Cabrillo at the end of the month. August is currently completely open due to vacation planning and the potential Nottingham Faire. I’m also keeping my eyes open as the various theatres start making their 2013 season announcements. Lastly, what few dates we do have open may be filled by productions I see on Goldstar, LA Stage Tix, Plays411, or discussed in the various LA Stage Blogs I read (I particularly recommend Musicals in LA and LA Stage Times).