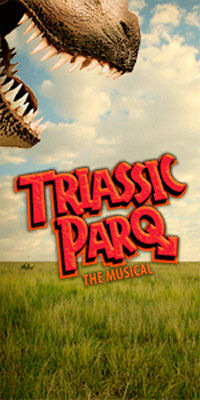 I’m always on the lookout for new and offbeat musicals. Many years ago, this led me to the hills of Anaheim (~64 miles away) to the Chance Theatre for their production of “Brain from Planet X“, a delightfully-kooky science fiction musical. Since then, there have been a number of productions that have intrigued me at the Chance (Jerry Springer-The Opera, Rooms: A Rock Romance, Anne of Green Gables), but either timing or the distance has led me to miss them. So when I read last November that Chance was bringing out “Triassic Parq: The Musical“, I started monitoring Goldstar Events for discount tickets. Luckily, some performances did show up, and even luckier, the first preview performances were the weekend after my birthday. So it was off to the Hills of Anaheim… and I must say, it was well worth the drive!

“Triassic Parq: The Musical” falls into the category of quasi-parody musical. It isn’t a true parody musical like “Silence!” or “Toxic Avenger: The Musical” that follow the original storyline closely, exaggerating the humor. But it also isn’t a serious musical as one sees on the Broadway stage, with a deep storyline and earnest seriousness behind it.  It is a musical that uses the theatrical Jurassic Park as a starting point (similar to the way Brain from Planet X used Plan 9 from Outer Space) to have a good time and perhaps make a point or two along the way. Luckily, Triassic Parq has grown since its first outing at the NY Fringe Festival; it has moved from a collection of sketches to a reasonable storyline with good character growth. In fact, one might say that unexpected growth is a main point of the story.

Triassic Parq (book by Marshall Pailet (FB), Bryce Norbitz (FB), and Steve Wargo (FB); music by Marshall Pailet) tells (roughly) the story of Jurassic Park… from the point of view of the dinosaurs. After a singing and dancing rollcall opening, the background exposition is provided by Morgan Freeman, who relates the story of the island of the dinosaurs, how the dinosaurs were created from prehistoric DNA of an insect mixed with a little DNA of a frog, and how the population is kept under control by being all female. Freeman also notes that the frog used for the splicing has the capability to change genders when necessary to keep the community alive, but indicates that fact isn’t important. Freeman’s character is quickly dispatched afterwards, and we’re left with our primary characters — T-Rex 1 (Kaitlyn), T-Rex 2, the Velociraptor of Innocence, and the Mime-a-saurus — all female. The two T-Rexes are best friends, and Innocence (the lead protagonist) is, well, innocent and curious.  When the lab provides the food for the day (a cute baby goat, wonderfully portrayed through puppetry), the Velociraptor of Faith has a prayer service to give thanks to the great Lab for their food. This celebration is interrupted by changes happening to T-Rex 2. She is having these funny feelings, and there is this strange growth in her body. Faith, recognizing it for what it is, expels her to beyond the electric fence, just like the previously expelled Velociraptor of Science. This provokes Innocence into action: she decides to go beyond the fence to find Science, and learn the true story of what is happening. Innocence goes on her quest, together with her cuddly cow companion, and eventually finds Science. Science knows well what is happening to T-Rex 2, and gives Innocence a book on Human Anatomy. This is where Innocence learns about the Dinosaur-Stick that T-Rex 2 is growing. Later, when T-Rex 2 comes across Innocence in the forest, she learns what is used for. Unfortunately, T-Rex 1 discovers them, and goes mad. This leads to the inevitable conclusion.

This story has hints of the original Jurassic Park story: you can see it in how the Dinos were created, through occasional touch points in the story, and how they go crazy at the end. During the discussion after the show, one of the authors pointed out that the closest parallel is Wicked — using the basic characters as a framework to tell a slightly different backstory from a different point of view. For Triassic Parq, when you strip away all the stereotypical jokes about men and their behavior, what you have is a story about family, the importance of survival, and how families will do what is needed to survive. We see this in the growth of Innocence, who moves from a young girlsaur to being a leader, as well as in the growth of the other dinos, who learn to accept their sexuality. What the story lacks (and perhaps what keeps it in the quasi-parody camp, although it doesn’t hurt the fun) is a depth of character: we see the lead characters as more broad archetypes as opposed to deeply realistic characters with which we identify.  This may improve as the show continues — we saw the 2nd preview and changes were still being made… on top of the large number of changes since the recent off-Broadway staging and the extensive changes from the original version. Translation: it keeps getting better and better. [ETA: Note that this also means that the Triassic Parq cast album may not agree with the show; the authors should consider doing a Kickstarter for an updated cast album, as they did with Now. Here. This.]

The staging of the show is very creative. The dinosaur aspects are conveyed through hints of costuming (as can be seen in these photos). Puppets are used to good effect, and the dancing uses the stage space well. I also liked the creative use of the electric fence. The score was a rock score and was enjoyable; I would need a few more listens to determine how well it holds up. Another creative aspect was the gender bending — all of the male characters were portrayed by females, and the female characters were mostly played by men. This allowed the audience to not bring in external stereotypes to their interpretation of the characters. However, there was another bending problem in the show: my mind couldn’t grok the species-bending aspects of T-Rexes mating with Velociraptors. Oh well, I guess all dinosaurs look alike in the sack.

Under the direction of the author, Marshall Pailet (assisted by Christopher Renfro/FB), the performances were great. In the lead position was Keaton Williams (FB) as the Velociraptor of Innocence. Williams brought a delightful (shall I say girlish :-)) energy to the ensemble: he danced well and sang wonderfully. Playing off of Williams were the two T-Rexes: 1 and 2. T-Rex 1 (Kaitlyn) was played by Micaela Martinez (resumé, FB) , and T-Rex 2 was played by Kellie Spill (resumé, FB). Both were strong singers and dancers, and Spill had some wonderful gender-bending scenes. The two also had a lovely duet.

Leading the dinosaur group was the Velociraptor of Faith, Jackson Tobiska (FB).  Tobiska had a bit more of a malevolent presence, for some reason — you weren’t quite sure of his motivations or why, but there was something he was hiding in his actions (note: I’m never sure what pronouns to use here, for you had male actors playing female characters). This was the mark of a good performance. Rounding out the cast were Alex Bueno (resumé, FB) as Mime-a-saurus and Camryn Zelinger (FB) as Morgan Freeman, the Velociraptor of Science, and various unnamed dinosaurs.  Bueno performed well, although (a) I couldn’t figure out why there was a particular dinosaur that was a mime, and (b) I couldn’t always figure out what she was miming. Other than that (which was more of a book flaw), Bueno was fun to watch on stage, especially in her final scenes. Zelinger was also fun. This was especially true in her Freeman introductory exposition, as well as her wonderful rap number with Innocence.

Movement and music-wise, the production was excellent. The production was choreographed by Kelly Todd (FB), who designed  creative dances that used the stage — including the fences and the poles — to good effect. Musical direction was by Taylor Stephenson (FB), who also led (as Pianosaurus) the three-piece band consisting of Stephenson on keyboard, Ryan Navales (FB) (Guitarodactyl) on guitar, and Jorge Zuniga (FB) (Percussodon) on percussion. The band provided great sound (I’ve always liked the live music at the Chance), and I particularly enjoyed the interactions between Pianosaurus and the remainder of the cast.

Turning to the technical (and I’ll note there were a few glitches I’ve written off to it being a preview performance): The scenic design by Joe Holbrook (FB) [assisted by Karrah Marie Spitznagel/FB] was relatively simple: a cave-like structure, some electrified fencing, with the musicians at the top of the structure. It worked well, although I couldn’t figure out the purpose of the ropes at various places. Lighting was by Matt Schleicher (FB) was very effective — it made good use of what I think were scrollers, as well as a number of LED lights and conventional lights. The sound design by Ryan Brokdin (FB) worked well, modulo the preview glitches. I particularly liked the deep-bass dinosaur roars. I’ll also note that Ryan worked on one of my recent faves, A Mulholland Christmas Carol, although he didn’t list it in his bio.  The costumes, which I’ve previously mentioned (and you can see here), were designed by Anthony Tran.  We’ve seen Tran’s work previously at the Colony for Year Zero. He did a great job here, with costumes that provided the suggestion of saur-i-ness without being overly limiting. Stage (or should I say Satge) Management was by Christopher Ramirez (FB), assisted by Jules Fugett/FB. The Executive Producer of Triassic Parq – The Musicalwas Mary Kay Fyda-Mar (FB).

Upcoming Theatre and Concerts:   Next week sees us back at REP East for the “25th Annual Putnam County Spelling Bee“.  February 9 is “Backbeat” at the Ahmanson. February 16 brings “You’re a Good Man, Charlie Brown” at Cabrillo Music Theatre, and the last weekend of February is “The Snake Can” at the Odyssey Theatre (based on an ad that caught Karen’s eye in the latest Footlights). March starts with “I’ll Be Back Before Midnight” at the Colony. After a break for Fogcon (although I may do something here), theatre picks up with “Catch Me If You Can” at Broadway LA/Pantages on March 16 and “Boeing Boeing” at REP East on March 23. March may also bring “End of the Rainbow” at the Ahmanson, most likely on March 30. April will bring the Southern California Renaissance Faire (huzzah for the $15 Holidazzle sale), “Grease” at Cabrillo Music Theatre, and a winetasting at Temple Ahavat Shalom. May is also busy, with two concerts — Elton John in Las Vegas on May 4, and (tentative) Michael Feinstein at VPAC on May 11. May may also bring “Falling for Make Believe” at The Colony Theatre, “To Kill a Mockingbird” at REP East. Lastly, continuing the look ahead, June will bring (tenative) “The Scottsboro Boys” at the Ahmanson Theatre, “Priscilla – Queen of the Desert” at the Pantages, (tentative), Sweet Charity“ at DOMA, and the Western Corps Connection at the end of the month. I’m also keeping my eyes open as the various theatres start making their 2013 season announcements. Lastly, what few dates we do have open may be filled by productions I see on Goldstar, LA Stage Tix, Plays411, or discussed in the various LA Stage Blogs I read (I particularly recommend Musicals in LA and LA Stage Times).

One Reply to “Singing and Dancing Velociraptors… What Could Go Wrong?”