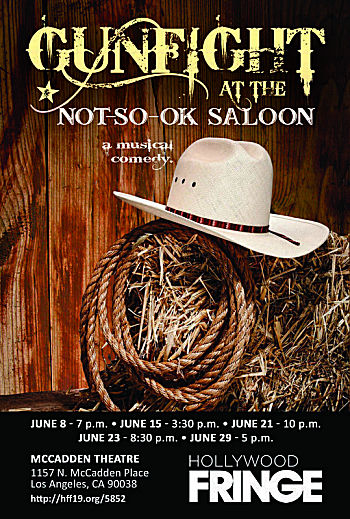 Yesterday was a quieter Hollywood Fringe Festival (FB) day: only one HFF19 show, followed by an evening of traditional theatre, seeing a show for a second time. There were some common themes, as both shows were Westerns, and to do with women … but that was about it.

Our Fringe show was Gunfight at the Not-So-OK Saloon (HFF19, WWW, FB) at the McCadden Theatre. This show was advertised with the simple line:

In the style of Gilbert and Sullivan, “Gunfight at the Not-So-OK Saloon” is an irreverent musical comedy set in the Old Wild West.

I’m not sure I’d go quite as far as Mssr. Gilbert and Sullivan. It was a great Fringe show, and would have been a perfect headliner at the Tumbleweed Festival, a “wild-west” equivalent of the Renaissance Faire. However, the show was not ready for prime time — “prime time” being the traditional Opera or Operetta stage. For that, it needs some work and to decide what it wants to be when it grows up. But as a Fringe show, it was strong.

The show takes place at a saloon at some unspecified location in the old West. The downstairs saloon is run by Floyd; the upstairs “girls” are managed by Nettie. One of the girls — and the singing headliner — is the redhead Hope, who is currently engaged the the sheriff of the town, Sheriff Sunday. One day, a stranger named Chance wanders into the saloon. Chance is looking for a girl he knew in the nun’s orphanage; a girl he promised to save himself for and eventually marry. A red-headed girl named Hope. Off all the bars in the world, and all that rot.

You can predict much of what happens at that point. They try to hide Hope’s past from Chance. Hope’s behavior is filled with clues to give it away, but Chance is clueless and sees none of it. The Sheriff arrives and eventually realizes what is going on and a gunfight ensues. But some improbably circumstances conspire to end the gunfight and resolve the ending.

The show was written by Brooke deRosa (FB), who also did the music and lyrics. For a Fringe show, the story is strong, and the music is entertaining (although a bit operatic, which isn’t a surprise given the performance and the background of the author). The staging is cleverly realized, and the performances strong.

But if the show is intended for a longer life, it needs to figure out what it wants to be — and needs some dramaturgy. Right now, the show is a little bit campy and a bit serious. A bit operetta and opera, as it were. But that doesn’t work. If it is to be a serious opera — which the music sometimes seems to want — it needs to embrace the operatic tropes. If the push is for the humor and the Gilbert and Sullivan style, it needs to embrace that. It needs to up the tempo and the playfulness. It needs to play to the camp, so to speak.

But the show also needs some dramaturgy. When looking at the main characters — Chance and Hope — a simple question is: do they change from the beginning of the play to the end? I didn’t see a strong change. Circumstances happened around them, but they never really changed or grew or transformed in any way. The people around them needs to serve as the catalyst — humorous or not — for that change. Were they? Yes, there was a revelation that subverted the fight and provided the backstory; however, that revelation was deus ex machina, defined by Wikipedia as “a plot device whereby a seemingly unsolvable problem in a story is suddenly and abruptly resolved by an unexpected and seemingly unlikely occurrence, typically so much as to seem contrived.” Yes, that happens in Gilbert and Sullivan, but it is also typically foreshadowed (and it today’s modern musicals, is terribly old-fashioned).

There are some other characterizations, beyond the fact that the well-touted redhead is brunette. In the ensemble, Francine’s character keeps making asides about how essentially she doesn’t want to be there. But these asides come out of nowhere — and more importantly, they lead nowhere. The behavior of that character, which separates her from the other ensemble girls, is seemingly for no purpose.

However, as I noted, this is Fringe. It is rare that a show is fully realized — especially a new show, as opposed to a Fringe presentation of an established play or musical. When looking at this as a Fringe show: it is executed well, has fun songs, loads of humor, and quite fun to watch. There’s lots of laughter. That’s really all you can ask for in a Fringe show: a safe and fun ride without a train wreck. This clearly meets that goal, which explains the sold-out run.

Under the direction of Jennifer Clymer (FB), with choreography by Julie Bermel (FB), the production holds the audience’s interest and the actors bring reasonable characterizations (if not slight over-characterizations, but that’s the nature of G&S camp) to their characters.

In the lead positions are Jonathan Matthews (FB) as Chance and Jade Bates (FB) as Hope. Matthews had a lovely voice, and captured the clueless nature of the character well. Bates had a face that reminded me of a young Shirley Jones for some reason, which combined with a lovely singing voice to make her a delight to watch.

Operating the saloon were Christopher Anderson-West (FB) as Floyd and Nandani Sinha (⭐FB, FB) as Netty. Both had strong voices and were having fun with their characterizations; we had seen Sinha before in the 5-Star Beauty and the Beast.

The Sheriff was portrayed by Phil Meyer (FB). He brings a great playfulness to the role, as well as a great voice.

Creating was is essentially the background ensemble is Monica Allan (FB) Lucille; Jason Chacon (FB) Abe; Rosa Evangelina (FB) Francine; Spencer Frankeberger (FB) Gabe; Jessie Massoudi (FB) Janine; and Anthony Moresi (FB) Wyatt.  In general, the ensemble was strong, and I enjoyed watching their background characterizations during a number of scenes. There were a few points where their faces seemed disinterested and out of character, but I’ll write that off to Fringe as they seemed to be quite into character at other times. 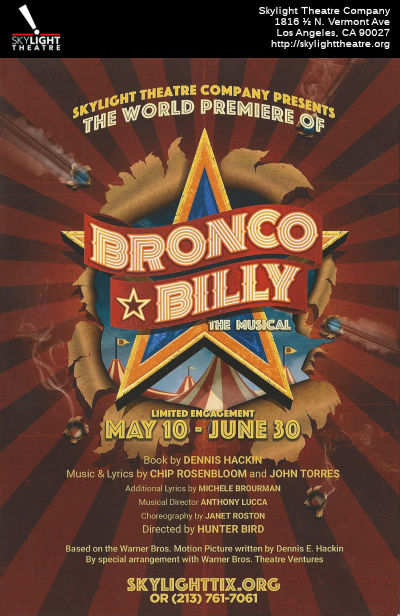 After our one Fringe Show of the day, we paid a return visit to Bronco Billy – The Musical at the Skylight Theatre (FB). I’m not going to write up the show again — you can read my original writeup for my thoughts on the show. I’ll note that it was as good on the second viewing as it was on the first: just a fun evening with great music and great performances. I did learn that the show has been extended to July 21, so ignore what you see on the poster, and visit the Skylight Theatre (FB) to go and see the show after Fringe is over.