Our second set of Fringe shows Sunday night turned from the comedy of the first two shows into the dramatic. The 6:30 pm show, 2 for 1, consisted of two solo-performance shows on seemingly unrelated subjects. The second, Moral Fixation (originally titled Boys Will Be Boys) explored a really interesting relationship question. 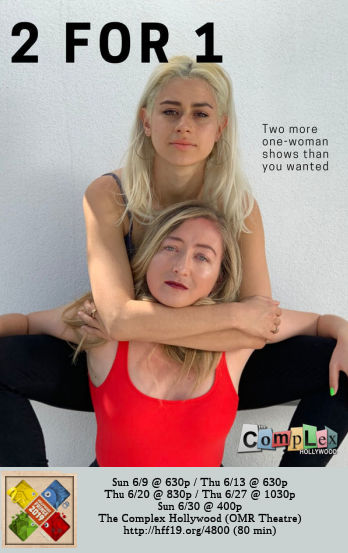 2 for 1 (HFF19, WWW) was, in some ways, theatrical whiplash. The performance consisted of two one-woman shows that were very distinct from each other, with no program to provide any context or background.

The first, Simulakra, performed by Alyssa Virker (FB), was much like the performer: an enigma. As a modern dance piece, it was wonderful. As a story, however, I’m less sure. Perhaps if I had the underlying assumed context, it would have helped.

The story appeared to be about a simulation of a human that was being loaded with a personality. There were four to choose from: Catwoman, Amalie, Mary, and some female animated dog. Of those three, I had only seen the movie basis for one (Amalie), and was aware only peripherally of Catwoman. So the context was clearly lost.

In any case Simulakra decides to have all four personalities, and then proceeds to keep switching between them. It showed off the performer’s range well … but as a story it was hard to follow.

The second show, however, was great: My Dead Mom’s Funeral by Angela Beevers (FB). Just like the catharsis of Supportive White Parents, this show explored Angela dealing with the death of her mother of brain cancer, and having to write a eulogy. She goes to an online  eulogy assistant, and starts trying to follow their advice to tell the story of the relationship with her mother. In doing so, we not only learn about Angela, we get a heartfelt tribute to her mother. It is at times funny, at times sad, at times angry, and always touching. Plus it ends with a belly dance.

Throughout the performance, we get Beevers donning wigs and becoming characters, and demonstrating her versatility and storying telling skills.

If there is one drawback to the show, it is the lack of a program: and thus, a lack of credits for stage manager and other supporting staff. Both of the performers are assistants in real life; they should understand the importance of crediting the people who help them. 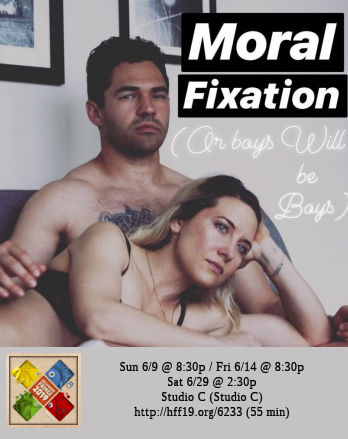 I was unsure what to make of our last show of the evening, Moral Fixation, when I read the description:

Morality isn’t necessarily logical. Watch Caleb and Claire, fiancès wildly in love with a bit of a hooker problem. When a (maybe not so) sordid detail from Caleb’s past comes to light, Claire’s (over the top) reaction has them, and a few close friends, talking a lot about sex and morals. A dark comedy with (a wounded) heart.

It turns out, however that the show — written by Cara Loften (FB) and Gabriel A. Berkovich (FB) — is much deeper than dark, and that it does what theatre should do: raises questions. In this case, it is the nature of our past when we go into a relationship. After Caleb’s uncle makes it know that he has bought a hooker for an employee, Claire asks Caleb if he has ever been with a hooker. Never ask a question you don’t want the answer to, because he has. It turns out to be quite upsetting to her. The play then explores her reaction to Caleb’s past — and why. It also raises the question about Claire’s past, when she slept around like crazy while she was drinking. Does whether you’re sober make a difference? Does whether it is for money make a difference? Does whether you enjoyed it make a difference? These are the questions explored in this play.

Good dramas leave an audience with questions to discuss on the car ride home. This play did that. The performances — under the direction of John Coppola (FB) — came across as realistic, and the leads had a chemistry that made you believe in the relationship.

Speaking of leads: Unsurprisingly for Fringe, the authors played the leads: Cara Loften (FB) as Claire and Gabriel A. Berkovich (FB) as Caleb. They clearly were strong in their performances. Supporting them were Veronica Alicino (FB) Joan; Bil Dwyer (FB) Ted; and Kate Robertson (FB) Beth.

Moral Fixation has two more performances: Fri 6/14 @ 830p, and Sat 6/29 @ 230p. The show raises some great questions in the context of some wonderful performances. It is well worth seeing. Tickets are available through the Fringe website.