And the Fringing continues: Yesterday we saw four more shows (6 out of a current 20 down). The first was about a rapping ape; the second was about a girl who wished for different parents… and got them. 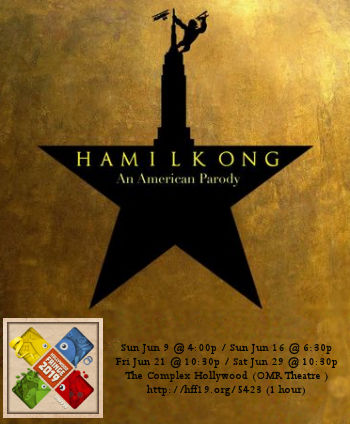 The idea behind Hamilkong (HFF19, WWW, Playbill, FB) was a potentially interesting one: tell the story of King Kong, using the music from the juggernaut that is the musical Hamilton.  The execution, at least at our preview performance, was fatally flawed in a number of ways. First and foremost, they committed the cardinal sin of a Fringe show: Thou shalt not run over your time slot. This show was scheduled for our hour; we walked out at almost the ninety minute mark because we had another show to make, and they had three songs still to go. We did receive an email from Adam Korenman (FB), the producer (and author, and lyricist) this morning that said: “We know that the show ran a bit longer than intended, and we want to apologize if you had to leave early to make your next play. When ambition and reality collide, you can end up running over a few minutes. HAMILKONG will be cutting some pieces in order to tighten up to 60 minutes. That means that you, as the Preview Crowd, saw an exclusive DIRECTOR’S CUT! Congratulations!”

Making lemonade and all that rot, I guess.

Yes, songs need to be cut. But I believe the problem with this show runs a bit deeper than that. Simply put, it is monotonous. There’s a reason that Lin Manuel had the variety of songs that he did — and in particular, why he had the more pop style songs for the King. Breaking up the style of the songs makes the show aurally interesting — it provides the necessary variety for the ears. In its current incarnation, Hamilkong is too much of the same. Look at the song list. How many times can you hear the lyric: “I’m just like a monkey; I’m flexible and funky”? So not only is cutting required, but improving the mix and the storytelling is needed.

Although I haven’t seen it, I can 100% guarantee that the version of King Kong on Broadway adapted the story and is not the Peter Jackson movie on stage. For this to work, the story details need to be worked down a bit a bit more to the essence, and the characters need to be clearer. The idea is good, the execution needs work.

Under the direction of Adam Korenman (FB), and with choreography by Marlee Delia (FB), the staging was effective for a fringe show: meaning minimal costumes and effects. The performances were, for the most part, strong — although with these lyrics, the cast really needs to make sure that they enunciate clearly so the audience can hear all the worlds.

Notable cast members were Geri Courtney-Austein (FB) as the king himself, Hamilkong;  Asia Ring (FB) as Ann Darrow, and Sashaaa (FB) as Carl Denham. These three had lovely voices, and did the best they could with the characters they had (after all, this is a parody, meaning the characters weren’t that fleshed out). In more supporting roles, but also with good voices, were Francesca Reggio (FB) as Carol Preston / T-Rex and Olga Desyatnik (FB) as Jack Driscoll. I’ll note that Reggio was particularly cute as T-Rex.

Hamilkong (HFF19, WWW, Playbill, FB) has three more performances: June 16 @ 630p, June 21 @ 1030p, and June 29 at 1030p. Hopefully, they will get the show cut down to the advertised Fringe length. Tickets are available through the Fringe Website. The show was an ambitious idea and had good performances, but our preview performance ran way long — a cardinal sin for Fringe. 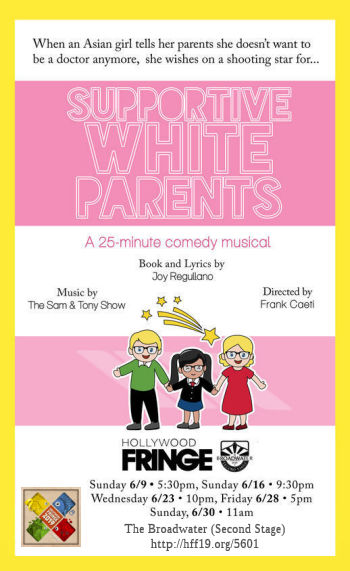 When an Asian girl tells her parents she doesn’t want to be a doctor anymore, she wishes on a shooting star for supportive white parents.

The show, which is structured with a few musical numbers, has Joy telling her Filipino parents that she has decided to change her major from Molecular Biology to Theatre and East Asian Studies, with predictable response. She wishes she had parents that would support her whatever she does, and so wishes on a star for supportive white parents. The stars grant her wish, and suddenly all the things that made up her identity: her drive, years and years of study, etc., have been replaced with the stereotypes of white parents that love you and hug you even if you slack off and talk back. It is a great parody of what parents have become these days. Of course, in the end she decides that her original parents are what she wanted.

The show is extremely funny, with entertaining music and great performances. Perhaps it leaned into the stereotypes a bit, but comedy has the ability to do that and get away with it. It was one of our favorite shows of the night.

In the lead position was  Joy Regullano (FB), who not only sang and told the story, but played a mean violin. She was just delightfully fun to watch.

As her Filipino parents were Giselle “G” Tongi (FB) Maria Elena [Joan Almedilla (FB) plays the role on 6/26 and 6/28] and Earl Baylon (FB) Jose, Guitar. Although I’m not an expert on Filipino parents, they seemed to capture what I would expect from that role well.

The Supportive White Parents were played by Gina D’Accario (FB) Carol and Scott Palmason (FB) Jim, with Greg Smith (FB) as the rebelling brother Garrett. They captured the “mayonnaise” perfectly: the parents that love you no matter what you do. Gee, I hope we weren’t like that.

In terms of production credits: The show was directed by Frank Caeti (FB), with music direction by Tony Gonzalez (FB) and Choreography by Ally Vega (FB).