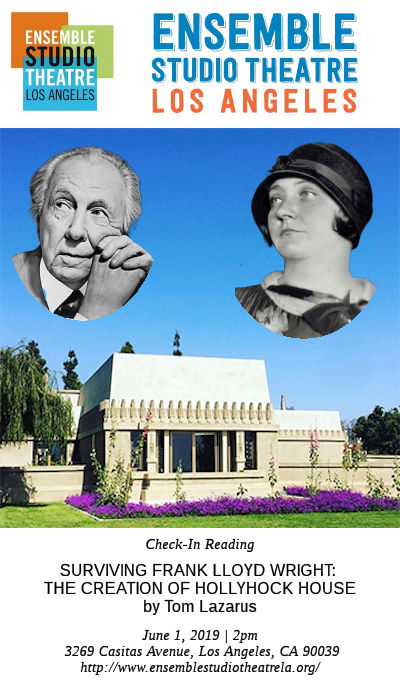 Saturday was an interesting day. The Hollywood Fringe Festival (FB) hasn’t started yet, so my calendar was empty. My wife was out of town and I wasn’t in the midst of highway page updates, so I didn’t have much to do. I thought about the opening night of  Ready Set Yeti Go at Rogue Machine Theatre (FB), but there were no discount tickets. But then I received some emails about the solution to my problem.

The first was from Ensemble Studio Theatre / Los Angeles (FB) about a “Check-In Reading” for a play they had in development from Tom Lazarus (FB). “Check-In Readings” are no-frills readings of plays under development in the Launchpad 2018-19 Long Term Dramaturgical program. The readings “check-in” on the current status of the play, and allow an audience to give their reactions and make suggestions.

At this reading, the play was “Surviving Frank Lloyd Wright: The Creation of Hollyhock House“. It was described in the email thusly:

The true story of political radical and free love advocate Aline Barnsdall hiring the scandal plagued genius Frank Lloyd Wright to architect a creative utopia. They battle over the design and the out of control budget. Wright hires Rudolph Schindler to supervise construction throwing the future of Hollyhock House in doubt as the aesthetic and sexual triangles play themselves out.

Given that as an ancillary interest to my highway hobby I have a keen interest in the history of Los Angeles, this play caught my eye. So yesterday started out with a jaunt to Atwater Village for the reading.

I’m not going to go into the developmental work needed or any criticisms — those were communicated to the playwright during the discussion afterwards (and were the purpose of this reading). Readings are how plays mature into what you see working on stage, and it is rare for a play to emerge fully formed and perfect (no matter what the author may think). The same is true for government documents :-). So this is more my positive thoughts on the show.

Going in, although I had heard of Frank Lloyd Wright and Barnsdall Park, I didn’t know much more than that. This show was focused on the creation of Hollyhock House. It starts with Aline Barnsdall hiring Frank Lloyd Wright to build an artist’s utopia at the top of Olive Hill, which she had purchased with her inheritance.  Her plan was to build a theatre, housing for staff, and a house for herself and her daughter on the hill. Wright was focused on the house, and kept delaying everything else. The focus of this play was the conflict between the two, and which ones would give first, and what the ultimate result would be.

I was initially confused as to location when this play started, probably because I’ve never been to Barnsdall Park or seen Hollyhock House. The way the characters spoke, I thought the hill was much higher than it was — but that was likely due to the growth of the area around the park obscuring the hill. Still, this play introduced me to a side of Los Angeles that I didn’t know, and made me go and research people I had never heard about (in particiular, Aline Barnsdall). That’s a good thing for a historical play. It helped me learn the personalities of these people. The script caught and held my attention, and I had a blast learning both about the story and the play development process.

The performances were strong. The actors, as this was a reading, had no costumes, no particular directions other than those in the script, and no real rehearsal. As such, you got to see the pure actor’s side: taking the lines on the page and bringing them to life just through voice and minimal movement. They did a great job. I particularly enjoyed the Williams, Peet, and Sperry.

I got such a kick out of this that I plan to attend more readings. If you want to learn about these types of efforts, get on the email lists for the theatres you like. To get on EST/LA’s list, click here. 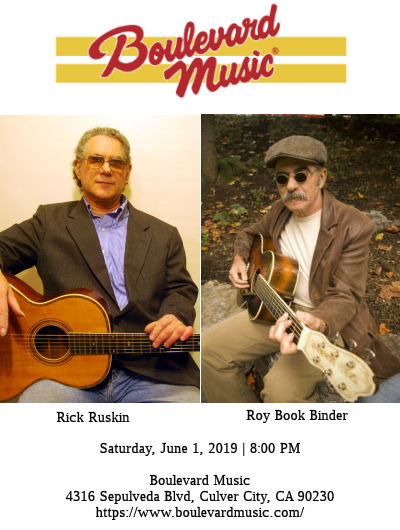 The second email I received was from Boulevard Music (FB) about a concert from Rick Ruskin and Roy Bookbinder. I was familiar with Rick Ruskin (FB), having been introduced to him by my uncle through some of his earlier albums. I was unfamiliar with Roy Bookbinder (FB) (sometimes written as Roy Book Binder). Both were expert guitar players, students and friends of the Reverend Gary Davis, with both a blues and humorous guitar style.

As I was less familiar with the songs from these artists (I have four albums from Ruskin, none from Bookbinder), I don’t have a play list. The two were both on stage at the same time, alternating songs and sharing stories. Ruskin did a mix of songs from Davis, himself, and a few covers of popular songs. Bookbinder focused more on the blues, doing songs from Davis, himself, and a few others. What was notable about Bookbinder was his stories. Before — and sometimes during — each song, Bookbinder would tell a rambling story of how the song came to be, stories about characters in the songs, and so forth.

There were a few mentions of Peter, Paul and Mary; I hadn’t realized that “If I Had My Way” was a Davis song and earned him substantial earnings. There was also a story about Mississippi John Hurt.

I enjoyed the music quite a bit, and picked up two albums from each artists. Always support artists at shows by buying merch.

Both had interesting observations about their age. This got me thinking about who the new folk artists are; in other words, who are the youngsters perpetuating the folk tradition. I’m not sure the answers, but I’d like to explore getting music from folk artists who aren’t 15 years older than I am.

Next week, the the Hollywood Fringe Festival (FB) starts. If you are unfamilar with Fringe, there are around 380 shows taking place over the month of June, mostly in the stretch of Santa Monica Blvd between 1 bl W of La Brea to 1 bl E of Vine, but all generally in Hollywood. On a first pass, there were lots I was interested in, 30 I could fit on a calendar, but even less that I could afford. Here is my current Fringe schedule as of the date of this writeup. [Here’s my post with all shows of interest — which also shows my most current HFF19 schedule. Note: unlike my normal policy, offers of comps or discounts are entertained, but I have to be able to work them into the schedule with the limitations noted in my HFF19 post]: