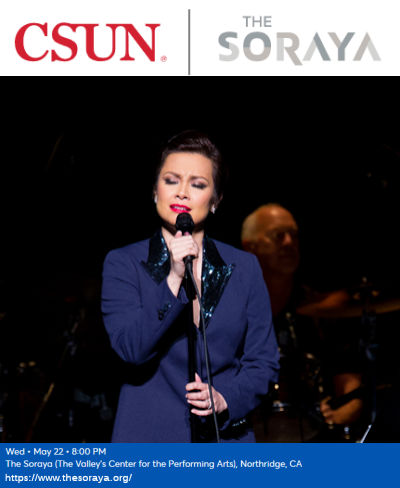 This week was a week for concerts. The first was Wednesday night, when we saw Lea Salonga (FB) at the Saroya (FB), which was known as the Valley Performing Arts Center at CSUN the last time Ms. Salonga played there in April 2016. If I had to characterize this show, which was the penultimate stop in her The Human Heart tour, it would be: Ballads and Anthems. Unlike back in 2016, where we were treated to a number of upbeat songs, including some songs in her native language, this was primarily slower songs and power songs. The two act show had the following songs:

Another 100 People
In a Very Unusual Way
Story of My Life
Take On Me
Blurred Lines
Burn
A Whole New World
Dead Girl Songs: I Dreamed A Dream / On My Own
Encore: You Will Be Found

Salonga had a great rapport with the audience, telling wonderful stories before most of the songs. Her duet on “A Whole New World” was wonderful. On the whole, it was an enjoyable show, but I did find myself wishing for a few more upbeat numbers. We did support the artist by picking up one CD: The Story of My Life: Live from Manila, with the BYU Chamber Orchestra. 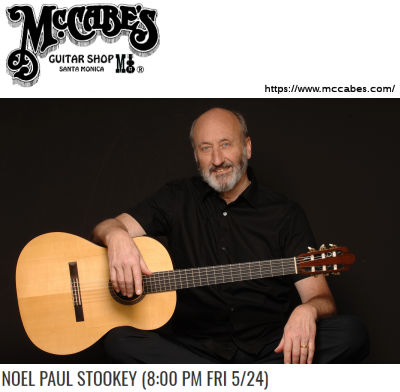 Our second concert saw us in Santa Monica at McCabes (FB) for a favorite artist of ours: Noel Paul Stookey (FB), who is best known as Paul in Peter Paul and Mary (FB). We last saw Noel Paul in a concert with Peter Yarrow in Thousand Oaks in 2017; our last solo visit with him was 2015 at McCabes. Noel Paul just recently did a concert in Ventura. Paul, and his musical companions, hold a special place in my heart: My first favorite group was PP&M, and folk music was a constant in my life even before there were the tunes from Broadway. McCabes also holds a special place: I remember seeing Shep Cooke (FB) there many many years ago with my uncle, back in the 1980s.

Noel Paul’s repertoire at this two set show was a mix of PP&M tunes and many of Noel Paul’s more recent solo tunes. There were just a few that I had never heard before. Alas, although he teased in the first act that he might do “Impeachable“, he didn’t. But the sentiment was clearly there.

Standing on the Shoulders🌟
Not That Kind of Music
Puff the Magic Dragon
Ives🌟
Right Field
The Winner
Imagine (Alternate Version)🌟 / For The Love of It All
Revolution (1 x 1)
Where Have All the Flowers Gone
Love Rules!

Whatshername
Cabin Fever Waltz
Cue The Moon
Love With a Capital “L”🌟
The Wedding Song
One & Many
Jean Claude
America the Beautiful
Blowing in the Wind
In These Times
Encore: If I Had a Hammer

Noel Paul has roots as a comedian, and it shows in how he tells stories before each song. He clearly loves performing at McCabes, which holds a special place with folk musicians. His shows there are extremely enjoyable, and are not to be missed.

This weekend brings one last show for May: Bronco Billy – The Musical at Skylight Theatre (FB).

June, as always, is reserved for the Hollywood Fringe Festival (FB). If you are unfamilar with Fringe, there are around 380 shows taking place over the month of June, mostly in the stretch of Santa Monica Blvd between 1 bl W of La Brea to 1 bl E of Vine, but all generally in Hollywood. On a first pass, there were lots I was interested in, 30 I could fit on a calendar, but even less that I could afford. Here is my current Fringe schedule as of the date of this writeup. [Here’s my post with all shows of interest — which also shows my most current HFF19 schedule. Note: unlike my normal policy, offers of comps or discounts are entertained, but I have to be able to work them into the schedule with the limitations noted in my HFF19 post]:

In terms of non-Fringe theatre (which, yes, does exist): Currently, the first weekend of June is open, although I’m thinking about Ready Set Yeti Go at Rogue Machine Theatre (FB) [if the publicist contacts me or I see it on Goldstar for Saturday]. Fringe previews start the next week. The end of June also brings Indecent at the Ahmanson Theatre (FB) on June 28, just before the busy last weekend of Fringe.

As for July, it is already filling up. The first weekend of the month is still open. The second weekend brings An Intimate Evening with Kristen Chenowith at,The Hollywood Bowl (FB).  The third weekend of July brings Miss Saigon at the Hollywood Pantages (FB), followed by A Comedy of Errors from Shakespeare by the Sea (FB)/Little Fish Theatre(FB). The last weekend of July brings West Side Story at 5 Star Theatricals (FB). August starts with an alumni Shabbat at camp, and The Play That Goes Wrong at the Ahmanson Theatre (FB).