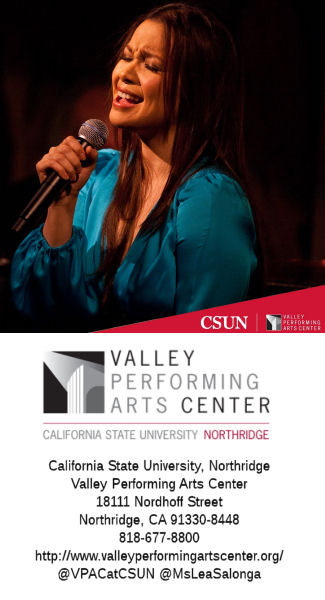 Last night we saw our penultimate show for this season at the Valley Performing Arts Center (VPAC) (FB) — the beautiful Lea Salonga (FB) in concert. Although I had heard Ms. Salonga before in various shows (Miss Saigon, Flower Drum Song, Allegiance), I had never heard her just as a vocalist, in concert.

Before I go on, let’s ask: what is a vocalist? It’s a valid question, in this era of singer / songwriters. Vocalists are artists who primarily make a living singing songs that someone else has written. Example: Neil Diamond is a singer / songwriter — most of the songs he has sung he wrote. Frank Sinatra, on the other hand, is a vocalist. He never penned a song, but he interpreted and presented songs that others have written. It is the vocalists who were responsible for moving the Broadway catalog from the stage to the current fonts of popular music. They are the people who find new things in music, new styles, new directions. Amongst the younger generation or those not familiar with Broadway, they are a dying breed. Most younger pop musicians these days are singer / songwriters.

Salonga, who got her start on Broadway, is a vocalist. She has a far ranging catalog, from Broadway to Jazz, from Pop to traditional Filipino pop music. All of this was on exhibit in her show last night.

I did not make a set list of her songs, and one hasn’t been posted yet. Hence, this list is not in order, and is from memory and definitely incomplete. The first act of her program consisted of a number of jazz numbers that I don’t  recall, a cover of The Story of My Life by One Direction, a medley of two songs from Les Mis, and Back to Before from Ragtime. I want to say that Still Hurting from Last 5 Years was in the first half, but it might have been in the second half. The second half included On The Street Where You Live from My Fair Lady, He Touched Me from Drat! The Cat!, the Filipino song Nais Ko (which hasn’t been recorded by her yet, but is available on YouTube), A Whole New World from Aladdin (which a duet with an audience member that was spectacular… and is already up on YouTube), Higher from Allegiance, and as an encore, Imagine.

All in all, it was just a beautiful show. Salonga was relaxed and seemed to be extremely happy to be back on the concert stage, although sad that the run of her last show wasn’t longer. VPAC was sold out, and the crowd was friendly, loving, and appreciative. It was just a great combination.

Salonga was backed by some excellent musicians: Larry Yurman on Piano, Kevin Axt (FB) on Bass, Paul Viapiano on Guitar, and Ray Brinker  on drums. Yurman also served as Musical Director. They were all great. Viapiano was particularly strong on some jazzier numbers that I can’t remember the name of. It was also a lot of fun to watch Brinker on the drums — he was particularly notable in one of the act one numbers where he drummed on a magazine.

Salonga’s next performance is tonight at the Segerstrom in Orange County. If you’re in the area and you can get a ticket, you’ll enjoy the show. Then again, if you’re in the valley, you can some see Elaine Boosler at TAS.

Upcoming Shows: Tonight the concerts continue with an Elayne Boosler concert at Temple Ahavat Shalom on April 2 (this concert is open to the community; get your tickets here). We have a mid-week concert of the Turtle Quintet at the Valley Performing Arts Center (VPAC) (FB) on April 7, followed by “Children of Eden” at Cabrillo Music Theatre (FB) on April 10. The next weekend’s theatre is on Thursday, because the weekend brings our annual visit to the Renaissance Faire (Southern). The Thursday show is Stella’s Last J-Date at the Whitefire Theatre (FB). The fourth weekend in April is is Pesach, but the Indie Chi Productions dark comedy Dinner at Home Between Deaths at the Odyssey Theatre (FB) sounded so interesting I’ve booked Sunday tickets. The last weekend of April will probably be the Four Clowns (FB) production of Lunatics and Actors at the LA Shakespeare Center on April 30. May starts with a hold date for Endgame at the Kirk Douglas Theatre (FB). We then run off to the Bay Area for our daughter’s graduation from Berkeley. While there, we are seeing the Landmark Musical Theatre (FB)’s West Coast Regional Premiere of The Boy from Oz (but pay no attention to that production behind the curtain). May 21 has a hold for Los Angeles: Then and Now, a new musical at LA City College (FB) from Bruce Kimmel. The last weekend of May has holds for the MoTAS Outing to the Jethawks, and Armadillo Necktie at The Group Rep (FB). As for June? It’s the Hollywood Fringe Festival (FB), and I’ve started to hold dates for the following shows: All Aboard the Marriage Hearse ✨ All The Best Killers are Librarians ✨ Qaddafi’s Cook — Living in Hell, Cooking for the Devil ✨ Squeeze My Cans ✨Tell Me On A Sunday  ✨ Toxic Avenger: The Musical  ✨  Vintage Box ✨ Einstein ✨Titus Andronicus Jr. ✨The Old Woman ✨Sweet Love Adieu ✨ My Big Fat Blond Musical✨Alien vs. Musical ✨ Hamlet (Las Vegas Style) ✨. But that’s just a small percentage; there are over 200 shows listed now.  We thought about Love The Body Positive, but then again… no. Can’t be scaring people.  As always, I’m keeping my eyes open for interesting productions mentioned on sites such as Bitter-Lemons, and Musicals in LA, as well as productions I see on Goldstar, LA Stage Tix, Plays411 or that are sent to me by publicists or the venues themselves.