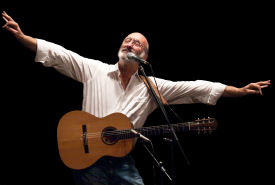 Yesterday was National Record Store Day. Of course, that means today is National Rip the Records day. So guess what I’m doing while I write up last night’s show? That’s right, ripping “fings ain’t wot they used t’be“, an obscure Lionel Bart musical written before Oliver!. This is because last night we were on the Westside, and took the opportunity to celebrate the day by hitting Record Surplus. My love of music is such that Record Surplus has a high price of entry; a rarely get out without my wallet being much lighter.

Music has been a constant theme in my life. Even before I saw my first musical, I was listening to  Peter, Paul, and Mary and singing songs at camp. This weekend is a diversion back to those roots; there’s nary a drop of theatre this weekend. Last night was a celebration of folk music when Noel Paul Stookey (FB) made his annual visit to McCabes Guitar Shop (FB); tonight is a Jewish music concert featuring Rick Recht and Sheldon Low as part of the Songleaders Bootcamp at Temple Ahavat Shalom. The latter was informed by the former; I don’t think you would have the tradition of Jewish songleaders and music without the reinvigoration of folk music sparked by the Gaslight, Dave Van Ronk, PP&M, Tom Paxton, the Kingston Trio, and all the artists that came out of the folk music resurgence of the 1960s.

Noel Paul’s concert was a return to folk music of old — but only in style. As Noel noted during the show, folk music — at least folk music with a message — demands that we be in the present and not live in a nostalgic world. As a result, most of his songs were from recent albums; only two or three were from the PP&M catalog. That doesn’t mean they were new; I think every song was also in last year’s show.

As I noted last year, when I first got into PP&M my favorite artist was Peter Yarrow. Since then, however, my appreciation of the entire group and all of its members has grown. The recent fifty year celebration has led me to reconsider Mary’s role, and I’ve really grown to appreciate Noel Paul’s music and lyrics. I really enjoy Noel Paul’s show; if you haven’t explored his solo music, you should.

Well, enough introductory blather. Here’s the song list from last night’s show. There was only a single act for the 100 minute show as there was a second show at 10pm.

As a side note: Artists like these are treasures and connections to the rich folk heritage. Those of you in the East Bay — you have a chance to hear that heritage next weekend when Tom Paxton and Janis Ian share the stage at Freight and Salvage. Tom has indicated he is stopping touring in November; this will be your last chance to see him. It looks like Saturday is sold out, but there may be tickets for Sunday. Go, and see an icon. I’ve heard rumors Tom may be down in SoCal in late Summer; with my luck, it will be when we are out of town on vacation.

Upcoming Shows: We have one more concert this weekend: the Rick Recht and Sheldon Low concert as part of the Songleaders Bootcamp at Temple Ahavat Shalom. After that we’re in Vegas for a week … and two shows are already booked: Menopause the Musical at Harrahs, and Penn & Teller at the Rio. Other shows that are possibilities are either Don Rickles at the Orleans or Jeff Dunham at Planet Hollywood, and Crazy Girls at the Riviera (before the Riveria goes away on May 4th) — the particular show depends on what shows up at Tix4Tonight.  Los Angeles theatre resumes in May with “Loopholes: The Musical” at the Hudson Main Stage (FB) on May 2. This is followed by “Words By Ira Gershwin – A Musical Play” at The Colony Theatre (FB) on May 9 (and quite likely a visit to Alice – The Musical at Nobel Middle School).  The weekend of May 16 brings “Dinner with Friends” at REP East (FB), and may also bring “Violet: The Musical” at the Monroe Forum Theatre (FB) (I’m just waiting for them to show up on Goldstar). The weekend of May 23 brings Confirmation services at TAS, a visit to the Hollywood Bowl, and “Love Again“, a new musical by Doug Haverty and Adryan Russ, at the Lonny Chapman Group Rep (FB).  The last weekend of May brings “Entropy” at Theatre of Note (FB) on Saturday, and “Waterfall“, the new Maltby/Shire musical at the Pasadena Playhouse (FB) on Sunday. June looks to be exhausting with the bounty that the Hollywood Fringe Festival (FB) brings (note that all Fringe dates are holds; ticketing doesn’t open until 5/1). June starts with a matinee of the movie Grease at The Colony Theatre (FB), followed by Clybourne Park (HFF) at the Lounge Theatre (FB) on Saturday, and a trip out to see the Lancaster Jethawks on Sunday. The second weekend of June brings Max and Elsa. No Music. No Children. (HFF) at Theatre Asylum (FB) and  Wombat Man (HFF) at Underground Theatre (FB) on Saturday, and Marry Me a Little (HFF) by Good People Theatre (FB) at the Lillian Theatre (FB) on Sunday. The craziness continues into the third weekend of June, with Nigerian Spam Scam Scam (HFF) at Theatre Asylum (FB) and Merely Players (HFF) at the Lounge Theatre (FB) on Saturday, and Uncle Impossible’s Funtime Variety & Ice Cream Social, (HFF) at the Complex Theatres (FB) on Sunday (and possibly “Matilda” at the Ahmanson Theatre (FB) in the afternoon, depending on Hottix availability, although July 4th weekend is more likely). The Fringe craziness ends with Medium Size Me, (HFF) at the Complex Theatres (FB) on Thursday 6/25 and Might As Well Live: Stories By Dorothy Parker (HFF) at the Complex Theatres (FB) on Saturday. June ends with our annual drum corps show in Riverside on Sunday. July begins with “Murder for Two” at the Geffen Playhouse (FB) on July 3rd, and possibly Matilda. July 11th brings “Jesus Christ Superstar” at REP East (FB). The following weekend is open, although it might bring “As You Like It” at Theatricum Botanicum (FB) (depending on their schedule and Goldstar).  July 25th brings “Lombardi” at the Lonny Chapman Group Rep (FB), with the annual Operaworks show the next day. August may bring “Green Grow The Lilacs” at Theatricum Botanicum (FB), the summer Mus-ique show, and “The Fabulous Lipitones” at  The Colony Theatre (FB). After that we’ll need a vacation! As always, I’m keeping my eyes open for interesting productions mentioned on sites such as Bitter-Lemons, and Musicals in LA, as well as productions I see on Goldstar, LA Stage Tix, Plays411.