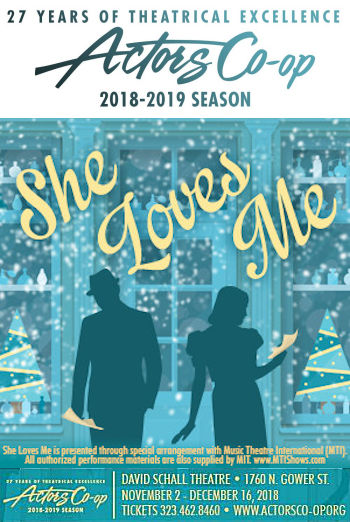 What is the odd connection between the Austin Lounge Lizards and the musical She Loves Me? The last time we saw She Loves Me, back in 2014 at the Chance Theatre, we saw an afternoon matinee, and then rushed to Culver City to see the Lizards at Boulevard Music. Last weekend, we actually moved our tickets for She Loves Me  at Actors Co-op (FB) to Sunday so we could see the Austin Lounge Lizards at Boulevard Music on Saturday night. We still rushed on Sunday: this time from Stitches So Cal in Pasadena to Hollywood for She Loves Me.

Oh well, at least it allows me to repeat my description of the show itself.

For those unfamiliar with She Loves Me, you probably know the story but by another name. The story started out as the play Parfumerie by Hungarian playwright Miklos Laszlo. This was later made into the movie The Shop around the Corner with Jimmy Stewart and Margaret Sullivan in 1940. It was then re-made into the movie In The Good Old Summertime with Judy Garland and Van Johnson in 1949. Most recently, it was re-made into the movie You’ve Got Mail in 1998 with Tom Hanks and Meg Ryan. On the stage, however, in 1963 Parfumerie was turned into the musical She Loves Me by Joe Masteroff (book — he later went on to do the book of Caberet), Sheldon Harnick (lyrics — he next went on to Fiddler on the Roof), and Jerry Bock (music — and again Fidder).

The basic bones of the story are simple: Single man has a pen pal with whom he is falling in love. Single gal has a pen pal with whom she is falling in love. Single man and single gal work at the same place and hate each other’s guts, without knowing that each is the other’s pen pal. Now, bring them together with some catalyst, turn the gears, and enjoy the show.

In the case of She Loves Me, the story sticks pretty close to the original source. Georg is a clerk at Maraczek’s Parfumerie in Budapest in 1937 (although there are no hints of war — evidently, the real world doesn’t intrude on this story). He works together with the other clerks: Ilona, Sipos, and Kodaly, and the delivery boy Arpad, for Mr. Maraczek. When the competing parfumerie closes, one of their clerks, Amalia, talks her way into a clerk job (which upsets Georg, who starts getting on her case). While all this is happening, Kodaly is busy persuing anything in a skirt — in particular, Ilona. When Mr. Maraczek suspects his wife of cheating, he starts bearing down on Georg, who passes the pressure on to the rest of the staff — making things even testier with Amalia. His only consolation is his pen-pal, who he has never met or seen, but loves anyway. He schedules a rendezvous with her, without knowing she is really Amalia. They day they are to meet, Georg gets fired and send Sipos to tell his unknown date he won’t be there. Sipos sees it is Amalia, and gets Georg to go talk to her. Thinking he is spying on her, they have a gigantic fight. End Act I. In Act II, of course, all things predictably come together in predictable fashion, which I, predictably, won’t spoil :-).

The music in this story is just a delight. From the initial “Good Morning, Good Day” to “Days Gone By” to “Tonight at Eight” to “Try Me” to “Ice Cream” to “She Loves Me” to “A Trip to the Library” — it is just a joy. If you haven’t heard the score, I strongly suggest you pick up one of the cast albums out there. You’ll fall in love with it.

So, we’ve established that we have a classic love story with a winning score. Why isn’t this musical done more? In 1963, there were the big song and dance numbers that people expected, and it was booked into the wrong theatre at the wrong time — and thus lost money. This led to a perception that it was a failed show. Remember , however, that Chicago was a failure when it first hit Broadway. Often great shows aren’t always profitable or recognized as such. You can learn more about the show and the details of the synopsis at Wikipedia.

So how did Actors Co-Op do, when compared to Chance? Under the direction and choreography of Cate Caplin (FB), the actors were clearly having fun with the piece, and that fun was projected to the audience. The overall company was quite fun to watch, and there was lots of joy in the production.

In the lead positions were Claire Adams as Amalia Balash and  Kevin Shewey (FB) as Georg Nowack. We had seen both before in the Actors Co-Op production of Violet back in May: they were strong then, and they gave strong performances now. They have great singing voices, wonderful personalities that come through in their performances, and a nice chemistry between the two of them (demonstrated exceptionally well in the second act).

In the second tier, we had the other clerks at Maraczek’s: Darren Bluestone as Steven Kodaly, Beau Brians (FB) as Arpad Laszlo, Avrielle Corti (FB) as Ilona Ritter, and Tim Hodgin (FB) as Ladislav Sipos. I was really taken by the performances of Corti and Hodin. Both had these wonderful twinkles and characterizations that made them a delight to watch; both also sang well.  Brians brought a great boyish charm to Arpad, and was strong in his numbers. I was a bit less taken by Bluestone: he had fun with the Gaston-ish primping, but otherwise, I got no real sense of his character or what he was bringing to the role.

In a slightly smaller role was Greg Martin (FB)’s Mr. Maraczek. He brought the right amount of gruffness and tenderness to the role, and was fun to watch.

The biggest difference from the Chance production was the orchestra. Whereas Chance had a single piano and gypsy violin, Actors Co-Op had 6 pieces: Keyboards (Anthony Lucca, who also served as conductor); Violin (Miyuki Miyagi); Cello (Cyrus Elia); Reeds (Austin Chanu); Trumpet (Nathan Serot); and Percussion (Ian Hubbell). The orchestra had good sound, although a few notes sounded a bit off.

Next weekend is very busy: Dear Even Hansen at the Ahmanson Theatre (FB) and A Bronx Tale at the Hollywood Pantages (FB), as well as A Day Out With Thomas at Orange Empire Railway Museum (OERM) (FB). The third weekend of November brings Beyond Jacobs Ladder from Jewish Woman’s Theatre (FB) at our synagogue on Saturday, and Finks at Rogue Machine Theatre (FB) on Sunday. Thanksgiving weekend has Steambath at the Odyssey Theatre Ensemble (FB) on Saturday and Remembering Boyle Heights at Casa 0101 (FB) in Boyle Heights on Sunday. December starts with the Annual Computer Security Applications Conference (ACSAC), followed by a hold for the Canadian Brass at the Saroya [the venue formerly known as the Valley Performing Arts Center (VPAC)] (FB). Then we may travel up to the Bay Area for Tuck Everlasting at TheatreWorks Silicon Valley (FB) (although that is starting to look less likely).