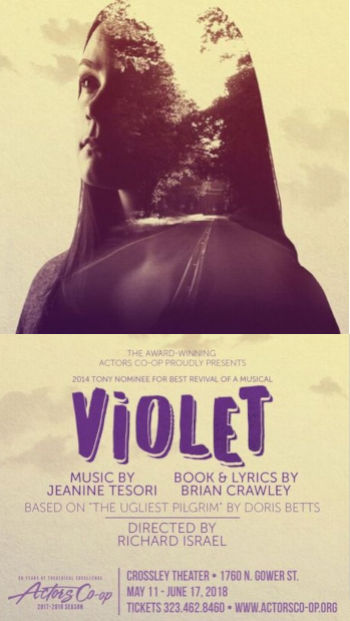 A few weeks ago, I wrote about the stark difference between two shows by the same composer (in that case, the team of Andrew Lloyd Webber (FB) and Glenn Slater (FB)): School of Rock was fantastic, whereas Love Never Dies really should have. Last night brought a similar comparison. Last week, I wrote about how Soft Power at the Ahmanson Theatre (FB), with a score by Jeanine Tesori, landed with a thud. Last night, we saw an earlier show by Jeanine Tesori, Violet, at Actors Co-op (FB) and it was glorious and soaring and delightful. It even was a temporary cure for a migraine, it was that good.

I’ve seen Violet before — I saw the West Coast Premier almost three years ago to the day at the El Portal in NoHo, produced by Kelrik Productions. Last nights production was a bit larger and had a bit — just a bit — more props, but was equal if not stronger performance-wise. Before I go into those performances, let me describe the first, stealing from my description of three years ago:

Violet (Music by the aforementioned Jeanine Tesori, lyrics and book by Brian Crawley, based on “The Ugliest Pilgrim” by Doris Betts) tells the story of Violet Karl of Spruce Pine, NC in 1964. When Violet was 12, an accident with her father and an axe left her with a large facial scar, from cheek to nose. Ever since, she has been teased and grown to accept her ugliness. Keeping her going was a faith healer in Tulsa OK. Now 25, Violet has raised enough money to take Greyhound to Tulsa to be healed. Going through Tennessee, she meets two Army soliders: a black sergeant named Grady “Flick” Fliggins, and a young white corporal named Monty. Both take an interest in Violet. While overnighting in Memphis in a hotel that accommodates blacks, they go out to party and Monty ends up sleeping with Violet (although Violet told Flick she had left the door unlatched).  When they arrive at Fort Smith AR, the Monty indicates he will come back Saturday to meet her bus after she’s done in Tulsa. She continues on to Tulsa where she meets the healer… and you can likely predict what happens there. I won’t spoil the details of the end of the story, but you can read them on the Wiki page for the musical. Throughout the show, there are regular flashbacks to young Violet and her father showing their relationship and how she reacted to the scar and the absence of her mother. PS: I also found a wonderful scene breakdown.

This is a show with a strong message — and it isn’t about the charade of faith healers (although there is a strong message of the power of belief). At one point, the phrase “Act ugly, do ugly, be ugly.” is used. In many ways, this is the underlying metaphor for the show. What you believe about yourself, how you behave, is what makes you ugly or beautiful. At the beginning of the show, Violet sees herself, due to the scar, as ugly. Later on in the show, after she believes she has been healed, you can see the change in her — she now believes she is beautiful and through the stint of that belief, transforms. But it isn’t just Violet. We see the soldiers transform from acting ugly to becoming caring people. We see, in the reactions of others, ugliness reflects. What becomes important is not “Act ugly, do ugly, be ugly” but its counterpoint: “Act beautiful, do beautiful, be beautiful.” It is our beliefs and behaviors that dictate how society sees us. Further, given this is the south in 1964, it is how society behaves — beautiful or ugly — that determines what society is.

This production of Violet, directed by Richard Israel (FB) with choreography by  Julie Hall (FB), was a delight. The performances were remarkable, with great facial expressions and believable reactions, wonderful movement, and soaring voices.

In the lead position was Claire Adams as Violet. I had so much fun watching her perform this role. She had a strong singing voice, but what got me more was the attitude she displayed and her facial expressions, She displayed a wonderful range of attitudes, and truly made the show special. Effectively paired with her was the younger version of Violet, played by Lily Zager (FB). She captured a similar range of attitude well and had a great singing voice. Even better was when the two of them sang together; their voices merged together delightfully. Just watch the two of them in the opening number or “Luck of the Draw”. [PS: Claire also designs webpages, a fact not in her bio but one of the ads]

Primarily playing off the adult Violet were the two soldiers she met on the bus ride:  Morgan West (FB) as Monty and Jahmaul Bakare (FB) as Flick. West gave a very tender portrayal of Monty, capturing not only bravado of a man entering the special forces, but the tenderness of a man who connected with a girl inside the damaged shell.  We’ve seen Jahmaul Bakare before — he was in the previous production we saw, where I wrote Bakare had a voice that would just make you melt; it was particularly notable in numbers such as “Let It Sing” and “Hard To Say Goodbye”.  He hasn’t changed, and is wonderful to listen to.

Primarily playing off the younger Violet was John Allsopp as Violet’s father. We saw Allsopp ages ago in Pest Control, so long ago he doesn’t list it on his resume! He gave an intense performance, ranging from the playful in “Luck of the Draw” to the emotional in the “That’s What I Could Do” number. His intensity in that number was just remarkable.

The remaining actors played multiple roles as bus passengers, as well as members of the ensemble. There are a few performances that are worth singling out. First and foremost is Kevin Shewey (FB) as the Televangelist Preacher (also Bus Driver, Gospel Choir).  He played the preacher with such intensity and spirit that I almost got up. Alas, my Judaism won out :-). He was also a strong singer in “Raise Me Up”. As we’re talking about church, I’d also like to single out Benai Boyd (FB) who portrayed Lulu Buffington, the lead Gospel singer (also: Almeta (Landlady) and a bus passenger). She had a wonderful voice during the gospel number. The next performer worthy of note was Lauren Thompson (FB), who for the longest time was our box office contact for this company. She played the Music Hall Singer, as well as a member of the Gospel choir and a bus passenger. I never realized that she had such a lovely voice. Lastly, I’d like to mention Co-Op regular Lori Berg (FB), who was wonderful as old lady on the bus (also: hotel hooker, gospel choir). Rounding out the ensemble as various bus passengers and choir members were: Patrick Cheek (FB) [Virgil, Leroy Evans]; Matthew Podeyn (FB) [Billy Dean, Waiter, Radio Singer]; and Emuna Rojkumar (FB).

Finally, turning to the production side. This performance was held in the Crossley Theatre, which is essentially a thrust staging with audience on three sides of the main action. The sides were made up to look like bus windows, and there were 1950’s style (mimicing PCC busses) movable benches and seats that became the various problems. Credit for the scenic design goes to Nicholas Acciani (FB), and it worked very well, Supporting this design was  Wendell C. Carmichael‘s costumes, which seamed reasonably appropriate for the era (I have a few quibbles on the Army uniforms — they conveyed the message but were lacking the normal uniform accouterments).  Cameron Combe (FB)’s sound provided the appropriate sound effects. Martha Carter‘s lighting design worked well, modulo a misbehaving LED above the band that wasn’t her fault. Remaining credits: Klint Flowers [Hair and Makeup]; Samantha Ramirez [Properties]; Derek R. Copenhaver (FB) [Stage Manager]; Jamie Mills [Asst. Stage Manager]; Heather Chesley (FB) [Artistic Chairwoman];  Selah Victor (FB) [Production Manager]; Nora Feldman [Publicity]; Thomas Chavira (FB) [Producer].

Ob. Disclaimer: I am not a trained theatre (or music) critic; I am, however, a regular theatre and music audience member. I’ve been attending live theatre and concerts in Los Angeles since 1972; I’ve been writing up my thoughts on theatre (and the shows I see) since 2004. I do not have theatre training (I’m a computer security specialist), but have learned a lot about theatre over my many years of attending theatre and talking to talented professionals. I pay for all my tickets unless otherwise noted. I am not compensated by anyone for doing these writeups in any way, shape, or form. I currently subscribe at 5 Star Theatricals (FB) [the company formerly known as Cabrillo Music Theatre (FB)], the Hollywood Pantages (FB), Actors Co-op (FB), the Chromolume Theatre (FB), a mini-subscription at the Saroya [the venue formerly known as the Valley Performing Arts Center (VPAC)] (FB), and the Ahmanson Theatre (FB). Through my theatre attendance I have made friends with cast, crew, and producers, but I do strive to not let those relationships color my writing (with one exception: when writing up children’s production, I focus on the positive — one gains nothing except bad karma by raking a child over the coals). I believe in telling you about the shows I see to help you form your opinion; it is up to you to determine the weight you give my writeups.

Next weekend brings a Nefesh Mountain concert at Temple Ramat Zion on Shabbat; the weekend itself is currently open.

June — ah, June. That, my friends, is reserved for the Hollywood Fringe Festival (FB), including The Story of My Life from Chromolume Theatre (FB). You can find a detailed discussion of the Fringe schedule here. Right now, it looks like the following: