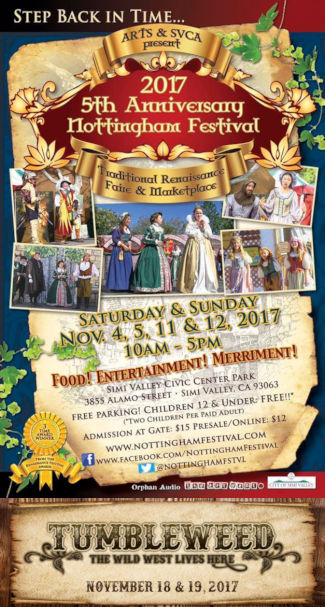 Southern California has two Renaissance Faires. There is the big one — the granddaddy of all Ren Faires — in Irwindale (nee Devore nee Agoura). There there is a newer faire — Nottingham Festival (FB) — that started 5 years ago by some of the original participants, with the goal of being truer to the original ideas of the Faire than the granddaddy had become. We supported the kickstarter of Nottingham 5 years ago, and have been attending ever since. Today was opening day, and we just got back. So what did we think of this year’s Faire.

First, be aware that Nottingham is much much smaller. My guess would be ⅓rd the size — which fits right for the running time, people, vendors, and such. They simply don’t have the variety of the granddaddy, but that doesn’t make them any less enjoyable. We just get through faster.

The folks behind Nottingham run a second faire at the same location on the heels of Nottingham: Tumbleweed Township,  Tumbleweed — this will be its second year — is the old West (US) in the late 1800s. It is a time period that is a bit more accessible to many, and one that fits well with the Simi Valley location. Many of the vendors sell at Tumbleweed as well, changing their product mix as well. We went last year to Tumbleweed and enjoyed it quite a bit.

This year’s Faire was in the same site as the last three years, and the layout felt… comfortable. It was as if they had figured it out. There wasn’t too much walking. Stages were mostly accessible. It felt as if there were a few tweaks from last year, but it worked.

As for the other aspects of the Faire:

Nottingham is doing a good job of growing at a slow place while not losing what makes it special. I look forward to next year and its further improvement.