Yesterday, as part of my Aprils Fools “real or fake news” post, I linked to a real news article about planned cuts at the EPA: “The Environmental Protection Agency has issued a new, more detailed plan for laying off 25 percent of its employees and scrapping 56 programs including pesticide safety, water runoff control, and environmental cooperation with Mexico and Canada under the North American Free Trade Agreement.” In response, you could easily see an Eco-Terrorist taking someone hostage to protest these cuts and the damage done under them, especially when you consider that with a more limited budget, the EPA will be forced to make more questionable decisions about the communities in which they spend the little budget they do have. Decisions made by bureaucrats, with lives measured by actuaries and accounts.

Back in 1984, William Mastrosimone wrote a play — Cat’s Paw — about an unusual terrorist, one who is brilliant, articulate and who believes he is right. He updated this play in 2001, right after the 9/11 attacks. It is running until April 30, 2017 at Actors Co-op (FB) in Hollywood, and it is surprisingly relevant today (especially in light of the Trump administration EPA actions). The play tells the story of  an eco-terrorist (Victor) who blamed the EPA for an incident in which the water supply of a town was poisoned. He kidnapped an EPA official (David Darling), and masterminded a suicide bomb attack at the White House in which 12 senators were killed. This terrorist — excuse me, eco-warrior — has a television news reporter (Jessica Lyons) led to his lair by his follower, Cathy, so she can tell the world why he has done what he has done. Victor’s obsession is the destruction of the world’s water supply and, with it, the final destruction of the human race by pollution. When the reporter asks if he feels any guilt about the death of the innocent people, he replies that hundreds of innocent people die every hour because of what mankind is doing to its water supply and do the people responsible feel guilt for this? The cat and mouse game between the young woman reporter and Victor gets more and more tense, leading to a shocking and violent conclusion.

In a very interesting piece about the play in the acting script (reprinted in one theatre’s blog), the author writes:

Information is what enables us to make good decisions in a democracy – right? but the truth is that most of information is repetitive or useless; turn is most of us have a morbid curiosity that needs to be satisfied. By giving in to our need to see mayhem, we give more power to the terrorists. We are all part of the deadly triangulation between the acts of terror, the media coverage, and the viewing.

During her tenure as P.M., Margaret Thatcher advanced a thought that we have not heeded: “Democratic nations must try to find ways to starve the terrorist and the hijacker of oxygen of publicity on which they depend.”

Until we figure out how to stay free and still report the news, terrorist acts will involve two explosions. The primary explosion kills innocent people in the street. The secondary explosion occurs in the viewer’s mind, over and over again, as a neural pathway is created. Ring bell. Bring food. Dog salivate. News is not just reported anymore; it is designed for effect. The story is edited, parts subtracted, associations established with editing in other stories and/or expert opinions or carefully chosen public reaction. The fear we felt when we first saw the event on television can be conjured again and again, at will, in video replay, as news and entertainment slowly merge. Fear is reinforced. Fear makes us malleable, and caught between the act of terror and media coverage, we exist for a time in a state of impaired judgement.

Cat’s Paw connects to a number of ongoing discussions in the world today: What is our responsibility to ensure clean air, clean water, and a safe world to live in? When there are other economic priorities, is it reasonable to cut back on environmental protections (and endanger other innocent lives) out of a need for that money for other economic purposes? Who should make those decisions, and what should be their basis: science, economics, or actuarial science? What is the role of the media in all this — are they dispassionate observers reporting news in a neutral fashion, or are they manipulating what we see to make us feel and believe things? Are they playing up our fears — whether that is a fear of our leaders, or those who oppose them? All relevant questions — all great discussions.

Actors Co-op (FB) production of Cat’s Paw is an intense and gripping presentation of these questions and issues (if not a little heavy handed). It places you in that bunker with David Darling; it allows you to see the sausage-making that is Terrorism, and its manipulation of the story for particular purposes. Is it relevant today? Yes. Does it present a clear answer? No. One would hope that this excellent production raises the questions above for you, and sends you home to discuss and explore the issue further. This is what theatre can do: start a discussion. 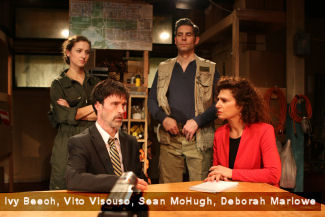 The Actors Co-op (FB) presentation of Cat’s Paw, tensely directed by Stephen Rothman (FB), stars Sean McHugh (FB) as the eco-warrior Victor and Deborah Marlowe (FB) as the reporter Jessica Lyons, supported by Ivy Beech (FB) as Cathy (one of Victor’s minions) and Vito Viscuso (FB) as David Darling (the hostage). All are strongly believable as their characters: their fears and pains and intent come across strongly. Staged in the small Crossley theatre with audience members on three sides, there are often small moments off on the side that speak to the powerful immersion of these actors in their characters. Just great performances.

Lauren Thompson (FB) was the understudy for Cathy, and was ever-reliable behind the scenes in the box office.

Director Rothman’s vision, realized by the Scenic Design of David Potts, places the audience in the bunker with the Earth Now activists. There are rough tables and chairs, graffiti, and shelves of realistic supplies and realistic weapons (all the work of Property Designer Lori Berg (FB)). The feelings of the bunker are amplified through the lighting design of James Moody (FB) and sound design of Adam R. Macias (FB). All this makes the audience part of the story, and amplifies its impact.  E.B. Brooks (FB)’s costume design also contributed to the feeling that these were real terrorists talking to a real reporter. Other creative and production credits: Collin Bressie (FB) [Fight Director]; Greyson Chadwick (FB) [Producer]; Heather Chesley (FB) [Artistic Chairwoman); Christian Eckels (FB) [Stage Manager]; David Elzer/Demand PR (FB) [Marketing/Publicity]; Selah Victor (FB) [Production Manger].

Upcoming Shows: The evening continued with a concert with Tom Paxton and the DonJuans at McCabes Guitar Shop (FB). Today brings the Colburn Orchestra at the Valley Performing Arts Center (VPAC) (FB). The weekend of April 8 brings Kurt Vonnegut’s The Sirens of Titan at Sacred Fools Theatre (FB). Mid-April brings Doc Severinsen and his Big Band at Valley Performing Arts Center (VPAC) (FB) on April 13, followed by Animaniacs Live at the La Mirada Performing Arts Center (FB) over the weekend. That will be followed on the penultimate weekend of April with Sister Act at Cabrillo Music Theatre (FB). The last weekend of April has two holds: one for the Renaissance Pleasure Faire, and one for Uncanny Valley at ICT Long Beach (FB) [we’re just waiting on Goldstar]. Lastly, looking to May, the schedule shows that it starts with My Bodyguard at the Hollywood Pantages (FB) the first weekend. It continues with Martha Graham Dance and American Music at the Valley Performing Arts Center (VPAC) (FB). The third weekend brings the last show of the Actors Co-op (FB) season, Lucky Stiff, at Actors Co-op (FB). May concludes with Hello Again at the Chromolume Theatre (FB), and hopefully Five Guys Named Moe at Ebony Repertory Theatre (FB).  As for June? Three words: Hollywood Fringe Festival (FB). That, barring something spectacular cropping up, should be the first half of 2017.