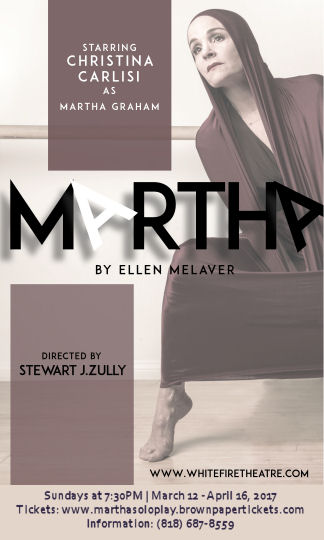 If you’ve actually been reading these theatre writeups to the end, you’ll know we have tickets for the Martha Graham Dance Troupe (performance information) at the Valley Performing Arts Center (VPAC) (FB) in late May. So when one of the publicists that thinks highly enough of me to view me as a critic emailed me information on a one-woman show on the life of Martha Graham — Martha, currently running at the Whitefire Theatre (FB) through April 16 — my virtual ears perked up. Here, I thought, was a great way for a dance novice like me to get familiar with a troupe I’ll be seeing; for with all the theatre I’ve attended, I’m dreadfully deficient in the dance arena. I may know theatre choreography, but the world of dance is often very different — theatrical dance as practiced today is very different than modern dance that tells a story solely through movement and expression, not music and lyrics. Martha, for me, provided the backstory and background of the woman who, according to many, was to the dance world what Picasso was to the art world or Frank Lloyd Wright was to the architecture world.

As a result, going into the show, I had no idea what to expect. I know this was a one woman story about the life of Martha Graham, portrayed excellently by Christina Carlisi (FB). But what approach had playwright Ellen Melaver taken to tell the story? Would it be focused on facts and dates, the chronology of life, a sequential portrayal of events? Would it be focused on the person behind the story, providing less of a factual focus and more of a focus on the drive and the persona — what made Martha Graham the unique force she has remained to this day?

The answer is that the author chose the latter, framing the story around the time Graham was in her early 70s, when she was doing a remounting of Clytemnestra with her dancing the lead. Some catastrophic incident occurred during the performance, prompting her board to send her a request to please transition from performing to choreography — a request that would require her to acknowledge her age and her mortality. This she viewed as a death sentence, for dance was her life — and so she started willing her body parts to her critics, friends, and family. In doing so, she also recounted what drove her to the dance, what kept her in the dance, what she contributed to modern dance, and what she gave up to do so. In the end of course, she grudgingly comes to the realization that she will have to start transferring her dances to her proteges, fitting her belief that dance only lives on if it is performed as originally danced.

[In reality, this likely corresponds to the late 1960s, as Graham last danced Clytemnestra in 1967. She died in 1991 at age 96, making her around 71 in 1967. This was a period of time when rheumatoid arthritis was hurting her greatly, she was increasingly turning to alcohol, leading to her doing her last dance in 1970. She regained control of her life around 1973, and Graham continued to do choreography until her death in 1991.]

One expression of Martha Graham captured in the show was that she saw dance like a beautiful shell on the beach. But if when uncovered it was half there and worn down, the beauty was gone. The entire body had to be there to be beautiful, the entire spirit is what made the performance. The audience could easily tell when the performance was just a facade. I’m pleased to say that Carlisi, working with director Stewart J. Zully (FB), didn’t have that problem. Carlisi, interpreting the script, captured not only the drive of Graham but the ego. It was clear that Graham considered herself above the nominal dance world: she was a goddess of dance, immortal, ageless, timeless. She sacrificed the fullness of her life  for the dance; she expected the dancers who worked for her to do the same. This was captured and expressed quite well by Carlisi. She also changed the language of dance, moving dance from the improvisational combinations that depended on the interpretation that day of the dancer, or the mechanical dancing that resulted from counted combination of steps, to a style focused on what the body said, on repetition, on “contraction and release”.

There were snippets throughout the performance of various Graham dances (choreography for the show was by Camille Loftin (FB)); alas, I’m not familiar enough with the Graham repertoire to know if they were represented correctly. There was a fair amount of emphasis on her interpretation of Aaron Copeland’s Appalachian Springs (a piece we know and love), especially as the vehicle for her brief marriage to Erick Hawkins. There were also numerous references to a Louis who was presumably her accompanist and someone close to her, but who was never otherwise explained. I learned, after the show when doing research for this writeup, that Louis referred to Louis Horst, a composer from Denishawn (the school where she first learned dance), who was her oldest friend and musical collaborator. Horst died in 1964, making the death still fresh in the context of the 1967 timeframe of the show. Given the nature of the show as an exploration of Graham’s ego and personality, but not a hard and fast recitation of history, the show could be improved by including in the program a brief chronology of Graham’s life and key events/performances, as well as some of the key people referenced in the show.

No where is this lack of context better illustrated than in her continual requests to have Louis play the Maple Leaf Rag, which you do not hear until the end. It turns out that the Maple Leaf Rag was the last dance she choreographed completely, finishing it in 1990. It is unclear when she started work on the piece.

So, in short, performance-wise, the production was illuminating and excellent preparation for our VPAC show in May. The program that accompanied the show could be improved with a little more context on dates and names. That is likely something that would occur in a larger mounting of the show were it to occur at a mid-size or larger venue; the framing context was missed in the intimate setting.

Production-wise, the staging was simple. The scenic design, for which there is no credit, was two boxes on the stage and a rack of costumes and costume pieces. The staging was augmented, at times, through the use of selected projections (there is no specific credit for projection design — this is likely covered by David Svengalis (FB)’s overall technical design and direction). The costumes themselves were simple and generally flowing, and were designed by Candice Cain (FB). Lighting design was by Derrick McDaniel (FB), and continued the overall transition into multicolor LED lighting from the single color Lekos and gels of the past (although a few Lekos were used). The Artistic Director of the Whitefire Theatre is Bryan Rasmussen (FB). The show was produced by Windy Productions.

Upcoming Shows: Next week brings brings a student production of The Robber Bridegroom at LA Valley College (FB) on Friday and An American in Paris at the Hollywood Pantages (FB) on Saturday. April starts with Cats Paw at Actors Co-op (FB) and a concert with Tom Paxton and the DonJuans at McCabes Guitar Shop (FB). The next day brings the Colburn Orchestra at the Valley Performing Arts Center (VPAC) (FB). The weekend of April 8 brings Kurt Vonnegut’s The Sirens of Titan at Sacred Fools Theatre (FB). Mid-April brings Doc Severinsen and his Big Band at Valley Performing Arts Center (VPAC) (FB) on April 13, followed by Animaniacs Live at the La Mirada Performing Arts Center (FB) over the weekend. That will be followed on the penultimate weekend of April with Sister Act at Cabrillo Music Theatre (FB). The last weekend of April has two holds: one for the Renaissance Pleasure Faire, and one for Uncanny Valley at ICT Long Beach (FB) [we’re just waiting on Goldstar]. Lastly, looking to May, the schedule shows that it starts with My Bodyguard at the Hollywood Pantages (FB) the first weekend. It continues with Martha Graham Dance and American Music at the Valley Performing Arts Center (VPAC) (FB). The third weekend brings the last show of the Actors Co-op (FB) season, Lucky Stiff, at Actors Co-op (FB). May concludes with Hello Again at the Chromolume Theatre (FB). As for June? Three words: Hollywood Fringe Festival (FB). That, barring something spectacular cropping up, should be the first half of 2017.

P.S.: The Hollywood Pantages (FB) announced their 2017-2018 season (which was the rest of 2018, after Hamilton took over the last 5 months of 2017) on February 7th. You can find my reaction to it here. The Ahmanson Theatre (FB) announcement was at the end of February, and here’s what I thought of it.