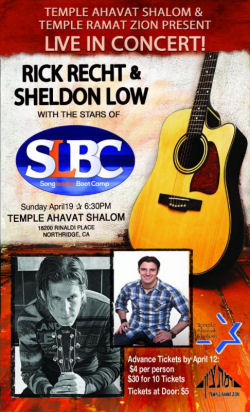 As I wrote yesterday, this has been a music weekend, not a theatre weekend. Last night was the concluding concert of the Songleader Bootcamp Regional Conference – Los Angeles (FB) (SLBC) at Temple Ahavat Shalom (FB), featuring Rick Recht (FB) and Sheldon Low (FB). It was a truly special night, highlighted by the unexpected — running into my cousin Robin who was part of the SLBC staff.

SLBC is an effort to educate future Jewish songleaders. As we were heading out of the concert, my wife was trying to explain the concept of the Jewish songleader. She thought it dated from Chuck Feldman of Wilshire Blvd Temple. I disagreed. To me, the Jewish songleader is a direct result of the folksinger movement of the late 1950s/early 1960s, which was also the time of the formation of the Jewish camping movement. The 1950s and 1960s was also a time you saw high school students picking up guitars and forming singing groups. This led to the Jewish camps adopting the singing of the emerging folksongs (if I recall the songbook of the Wilshire camps in the 1960s, there was a large number of songs from the folk movements). Other factors flavoring the mix were the emergence of modern Israeli music in the 1950s and 1960s, and the encouragement of folksongs that addressed social justice issues. Put all these factors into a blender, and what emerged was the songleader: a young adult with a guitar leading a Jewish camping community modern Jewish song (and possibly writing them along the way). This moved Jewish music from the traditional cantorial style to the “Rabbis with Guitars”. The seminal emergence here was from Minnesota, which gave us Debby Friedman in the early 1970s; this led to the modern Jewish artists that came out of NFTY, artists such as Rick Recht, Sheldon Low, Beth Schafer, Julie Silver, and many many more.

SLBC is an organized effort to keep this movement alive to the next generation. Musical leaders and Jewish educators spend an intense weekend with regional Jewish teens, focusing on the music and the message. What emerges are teens supercharged to take their guitars (or fiddles or trombones or ukuleles or … whatever) and lead and inspire. From what we saw last night, that’s just what happened. 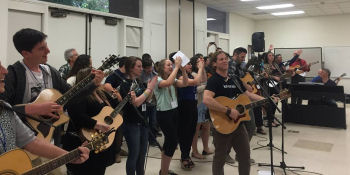 As with any concert like this, writing a traditional review is pointless. This was a high-energy songfest, with a mixture of songs led by Rick and Sheldon, and featuring various subsets of SLBC participants and leaders, and encouraging audience participation. It was a camp song session in Northridge, not a sit-in-the-chair-and-listen concert. What songs were sung? Here’s an attempt at a song list, although you must note that many variations of songs have the same name being based on common texts:
(Note: The picture to the right was snarfed from Facebook)

So here are some general observations of the concert:

At this point, I’d link in a video of the show. Loads of folks were filming. But so far, nothing is up on YouTube. I’ll edit this post if I find something.

Different things draw people to synagogue. Some come to find the ritual they had in their youth. Others come for the spiritual community, the kehilla kedosha. What will make synagogues succeed in the 21st century will be the ability to create that community, and that means figuring out how to bring the camp energy, experience, and spirituality out of the woods (or the California hills) and into the edifices, transforming them. This bootcamp — and the concert we saw resulting from it — is a great way to do so.

Upcoming Shows: Today we head out on vacation — Las Vegas, baby! Two shows are already booked: Menopause the Musical at Harrahs, and Penn & Teller at the Rio. Other shows that are possibilities are either Don Rickles at the Orleans or Jeff Dunham at Planet Hollywood, and Crazy Girls at the Riviera (before the Riveria goes away on May 4th) — the particular show depends on what shows up at Tix4Tonight.  Los Angeles theatre resumes in May with “Loopholes: The Musical” at the Hudson Main Stage (FB) on May 2. This is followed by “Words By Ira Gershwin – A Musical Play” at The Colony Theatre (FB) on May 9 (and quite likely a visit to Alice – The Musical at Nobel Middle School).  The weekend of May 16 brings “Dinner with Friends” at REP East (FB), and may also bring “Violet: The Musical” at the Monroe Forum Theatre (FB) (I’m just waiting for them to show up on Goldstar). The weekend of May 23 brings Confirmation services at TAS, a visit to the Hollywood Bowl, and “Love Again“, a new musical by Doug Haverty and Adryan Russ, at the Lonny Chapman Group Rep (FB).  The last weekend of May brings “Entropy” at Theatre of Note (FB) on Saturday, and “Waterfall“, the new Maltby/Shire musical at the Pasadena Playhouse (FB) on Sunday. June looks to be exhausting with the bounty that the Hollywood Fringe Festival (FB) brings (note that all Fringe dates are holds; ticketing doesn’t open until 5/1). June starts with a matinee of the movie Grease at The Colony Theatre (FB), followed by Clybourne Park (HFF) at the Lounge Theatre (FB) on Saturday, and a trip out to see the Lancaster Jethawks on Sunday. The second weekend of June brings Max and Elsa. No Music. No Children. (HFF) at Theatre Asylum (FB) and  Wombat Man (HFF) at Underground Theatre (FB) on Saturday, and Marry Me a Little (HFF) by Good People Theatre (FB) at the Lillian Theatre (FB) on Sunday. The craziness continues into the third weekend of June, with Nigerian Spam Scam Scam (HFF) at Theatre Asylum (FB) and Merely Players (HFF) at the Lounge Theatre (FB) on Saturday, and Uncle Impossible’s Funtime Variety & Ice Cream Social, (HFF) at the Complex Theatres (FB) on Sunday (and possibly “Matilda” at the Ahmanson Theatre (FB) in the afternoon, depending on Hottix availability, although July 4th weekend is more likely). The Fringe craziness ends with Medium Size Me, (HFF) at the Complex Theatres (FB) on Thursday 6/25 and Might As Well Live: Stories By Dorothy Parker (HFF) at the Complex Theatres (FB) on Saturday. June ends with our annual drum corps show in Riverside on Sunday. July begins with “Murder for Two” at the Geffen Playhouse (FB) on July 3rd, and possibly Matilda. July 11th brings “Jesus Christ Superstar” at REP East (FB). The following weekend is open, although it might bring “As You Like It” at Theatricum Botanicum (FB) (depending on their schedule and Goldstar).  July 25th brings “Lombardi” at the Lonny Chapman Group Rep (FB), with the annual Operaworks show the next day. August may bring “Green Grow The Lilacs” at Theatricum Botanicum (FB), the summer Mus-ique show, and “The Fabulous Lipitones” at  The Colony Theatre (FB). After that we’ll need a vacation! As always, I’m keeping my eyes open for interesting productions mentioned on sites such as Bitter-Lemons, and Musicals in LA, as well as productions I see on Goldstar, LA Stage Tix, Plays411.