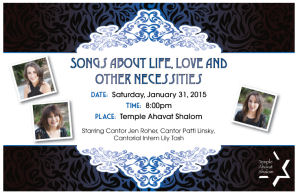 A Cantors Concert. When you hear that phrase, you probably think of a long religious service with lots of liturgical music. While, indeed, that is a form of a musical presentation given by a cantor, it is part of a worship involving a congregation (which you must never refer to as the “audience”, as Rabbi Sheryl always used to remind me). A true concert provides the opportunity for a cantor to perform in front of an audience. It provides the opportunity for a cantor, who is a trained music professional as well as a liturgical leader, to make selections designed to showcase their talent. It also allows the community to see a cantor as more than just a religious musician, to see the cantor as a fully-rounded entertainer. These concerts can also serve as fundraisers for a congregation, where congregants, friends, and family can support both the cantors on stage and the congregation as a whole through their paid attendance. Given this, one can look at a “cantors concert” through multiple aspects: the performance aspects, the fund-raising success, and the extent to which it deepened the relationship between the audience (which contained some percentage of congregation members) and the cantor.

I mention all of this because last night I attended the Cantor’s Concert at our synagogue. I was torn: do I write it up (because I write up every live performance I go to), or do I take a pass (because I’m president of the Men’s Organization at the synagogue)? I decided to write it up. Firstly, because I believe in the organization, and I believe in the talent we have in our cantor, cantor emerita, and cantorial intern. Secondly, because I believe that by publicizing the event, I’ll either entice someone to come visit our synagogue, or I’ll entice someone to support a cantors concert near them. Lastly, because I believe it is important to encourage attendance at live performances. You can see a movie anytime — a concert, play, musical, or other live performance is by its nature “one time only”. Every performance is different. Just ask anyone who has seen Frank Ferrante or Dame Edna, and you’ll know what I mean.

In general, this was a good selection of songs for the theme, although the lyrics of the opening selection didn’t really fit the show (I have never really realized before how specific they are to the show Pippin). Picking a set of songs for a show is difficult. Although I have some minor quibbles with the selection (some shows were a little over-represented, and it was surprising to not see any Kander/Ebb, Coleman, Ahrens/Flaherty, or Maltby/Shire), those are mine. The audience was unaware and enjoyed every selection; the songs worked into the theme well.

Overall, the performances were good. There are a few I would like to single out:

The trio did very well on the jazzier / swing numbers. The voices blended very well and provided exceptional harmony in songs like “Bei Mir Bist Du Sheyn”, “Lullaby of Broadway”, and particularly “Boogie Woogie Bugle Boy”. “Bei Mir Bist Du Sheyn” featured some really good scat singing and wonderful piano, and “Boogie Woogie Bugle Boy” has some wonderful audience interaction. Given the quality of songs like these, the group should consider focusing next year’s concert on this style of music. It could be truly exceptional.

In solo performance, Cantorial Intern Tash did very well on both “Far From The Home I Love” and “Alto’s Lament”.  On the former, she hit the emotional aspect well as she related it to her own life; on the latter, she was able to pick up and amplify the comic aspects of the song.

Cantor Roher also had some performances worthy of highlight. Her introductory story on “There’s a Fine, Fine Line” was interesting (and prompted a mention of the “Marvin Hamlisch Story” after the show, given the other Hamslich songs); the song itself was well sung. In addition to her singing, her acting side shone on “Taylor, The Latte Boy” where she was able to personify and become the character in the song. Her enthusiasm and joy was contagious (in a good way) during “Fascinating Rhythm”, and she wowed with her dance moves in “Music and The Mirror”. Overall, Cantor Roher’s performance and selection enabled the audience to see a truly different side of her. In addition to the singing ability, she has a playful performance side and remarkable enthusiasm that can’t always be expressed on the bimah. It was a delight to see them here.

Cantor Linsky was exceptional in “It Don’t Mean a Thing”, not only for the singing but in remarkable interactions with the audience and the musical combo. She was very touching in her own composition, “I am Enough” and handled “Defying Gravity” (a difficult number) quite well.

The three were backed by a very strong musical combo consisting of Chris Hardin on keyboards, Kirk Smith on bass and guitar, and Dan Schnelle on drums.  The three were very good, and shone during the jazzier numbers. I could just imagine how well the three might do on  jazzier Cy Coleman music. The interplay with the artists was also very good, especially in “It Don’t Mean a Thing” and the opening of “Taylor, The Latte Boy”.

Overall, the show was enjoyable, and was warmly and enthusiastically received by the audience.

Turning to the technical side of things: Sound was provided by Drew Dalzell and Diablo Sound.  We’ve seen Drew’s work before at The Colony Theatre (FB), and the quality of the sound here demonstrated why the congregation needs to upgrade the bimah sound system (anyone got a spare twenty thousand to donate?) Lighting was the standard bimah lighting; the facility doesn’t provide a lot of flexibility in that area. The other aspects of the production were smooth; Wendy Krowne, Jan Saltsman, and the Concert Committee deserve commendation for the hard work that went into this. My only quibble was that there needed to be the obligatory cell phone reminder — the folks sitting next to me kept bringing out their cell phone and texting during the performance, which was quite distracting. One would hope that, in this day and age, “the announcement” would no longer be necessary. Hope, alas, sometimes gets dashed on the sharp rocks of reality.

During the show, it was reported that this Cantors Concert was the most financially successful concert in the history of Cantors Concerts at TAS. This is very good thing. If you missed this concert, you’re out of luck — it is a one time event. I’m sure there will be another one in 2016, and before then, you can come and hear Cantor Roher on the bimah almost every Friday night.

Upcoming Shows: February performances start later today with a concert performance of the musical Redhead at Theatre West (FB).  We have a Bat Mitzvah on Saturday, February 7, so there is no theatre scheduled that weekend. The next week makes up for it with two shows: “Loch Ness” at the Chance Theatre (FB) on February 14 and “The Threepenny Opera” at A Noise Within (FB) on February 15. The weekend of February 21 sees us in Burbank for Inside Out at the Grove Theatre Center (FB). February closes with two more Burbank performances: the Good People Theatre Co (FB)’s production of Maltby/Shire’s Closer Than Ever at Hollywood Piano in the afternoon, and “The Road to Appomattox” at The Colony Theatre (FB) on February 28. March is equally busy, with the MRJ Man of the Year dinner on March 7 (and a Purim Carnival at TAS the next day), “Carrie: The Musical” at La Mirada Theatre for the Performing Arts (FB) on March 14, a hold for “Drowsy Chaperone” at CSUN on Friday March 20, “Doubt” at REP East (FB) on Saturday March 21, “Newsies” at the Pantages (FB) on March 28, followed by Pesach and the Renaissance Faire on April 11. Other than the Faire, April is pretty much open (as is May), but I expect that to start changing soon. Those who enjoyed the Marcy/Zina songs should note that there’s a Marcy and Zina concert at Pepperdine on Tuesday, February 3; alas, as it is a weeknight, I probably won’t make it. As always, I’m keeping my eyes open for interesting productions mentioned on sites such as Bitter-Lemons, and Musicals in LA, as well as productions I see on Goldstar, LA Stage Tix, Plays411.