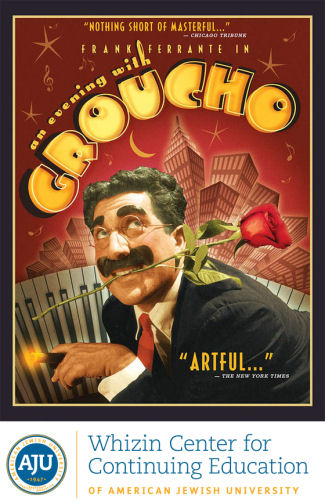 Back when I was in High School, the Marx Brothers were hot. No, I didn’t go to high school when their films were first released (I only look that old). I’m referring instead to the mid-to-late 1970s, when some contractual dispute was resolved and one of the early Marx Brothers movies, “Animal Crackers“, could be shown again (the situation just before that release was recently described by Mark Evanier on his blog, to give you an idea). This resulted in a resergence of the popularity of the brothers in high schools and college campuses: their posters were everywhere, the Richard J. Anobile book “Why a Duck?” came out, and everyone was rewatching their movies. Me included. I’m still a big Marx Brothers fan (I like “Duck Soup” quite a bit). Alas, I think today’s kids don’t know the classic ’30s comedians — the Marxes, Abbott and Costello, Laurel and Hardy, W.C. Fields. It’s a loss.

Why am I mentioning all of this? As you know, I regularly read Mark Evanier’s blog. For years, Mark has been touting the praises of Frank Ferrante (FB) performance as Groucho Marx in “An Evening with Groucho”.  So, when I received the Fall Amercian Jewish University catalog and discovered that they were offering a performance of “An Evening With Groucho”, I was there. Full price even. So guess where I was this afternoon? That’s right, say the secret word and win $200.

Normally, this is where I would give you a synopsis of the story. I can’t. For one thing, there is no book writer credited. Perhaps there was one at one point; I don’t know. Although during the show, Ferrante summarizes Groucho’s life, I get the feeling that because he has been doing this show and inhabiting this character for so long, the stories and incidents have become a part of his life as well. In other words, there is no book writer needed because essentially Ferrante becomes Groucho. As Ferrante relates, he has known Groucho and the Marx family since his late teens; he originated the title role in the off-broadway “Groucho: A Life in Revue” that was written by Groucho’s son, Arthur; and he has been doing this solo show for 25 years. In short, there is a reason the New York Times referred to him as “the greatest living interpreter of Groucho Marx’s material.”

However, it is not the story of Groucho that makes this show. You want the story of Groucho, you can read Wikipedia or find numerous versions out there. It is the fact that this show is perhaps only 40-45% the story of Groucho. The remainder of the show is the embodiment of Groucho. Through his interaction with his painist, Eric Ebbenga, and continuous interaction with the audience, you learn what the character of Groucho was like. Ferrante does a masterful job of channeling Groucho’s quick wit and repartee to make a thoroughly entertaining show that just flies by.  He was constantly interacting with the front row, with kids in the audience, and even came across our row (yes, he worked his way all across row “G”). Another “In Short”: You truly feel that Ferrante becomes Groucho, and it is Groucho, not Ferrante, on stage. That’s a high compliment.

[Edited to Add: A good example of this was how he reacted to unexpected things from the audience. At one point, he was interacting with a fellow in the front row who was drowsing out. He asked an usher to get him some coffee. When she came back a few minutes later, he was surprised but recovered well and made an even bigger joke of it. Similarly, he had a wonderful interaction with a 9 year old boy who insisted his favorite Marx brother was Harpo — even after going up on stage. The ability to recover from the unexpected in audience interaction while staying perfectly in character is a hallmark of someone who has melded with the character — and it is also what I surmise makes this show different in every performance.]

Thus, yet again I find myself agreeing with Mark: If you can catch Ferrante as Groucho, do so. You can find his touring schedule here.

One disappointment, however: The show was supposedly sold out. Yet there were four seats in front of us open. Folks: if you buy tickets for a show, please go. The actors on stage aren’t performing for the money the show brings in; they are performing for the audience in the seats. Additionally, I also noted that seats emptied out after the intermission. I could understand that for a stinker of a show (cough, “I Caligula, An Insanity Musical”, cough), but this was good. Tacky, tacky, tacky.

Turning to the technical, well, AJU provided no technical credits in the program. So thank you to the unnamed set designer, sound engineer, and lighting designer (especially the poor spot operator who had to keep up with Ferrante’s continual movement into the audience).

By the way, you’re probably asking yourself why AJU — American Jewish University (the merger of the University of Judaism and Brandais Barden) presented this. The answer is that their community adult education program wants to highlight those significant places where Judaism influenced cultural change. The Marx Brothers, who were Jewish, clearly did that.

An additional “only in Los Angeles” moment: This was the second show in an row where there has been someone famous in the audience sitting not that far from me. Friday night, at “Serial Killer Barbie”, we had Mary Jo Catlett (of “Different Strokes” and Spongebob Squarepants fame) sitting two seats away from us.  At today’s show, we had someone even more famous — someone who Ferrante singled out as one of his inspirations for doing this show: Hal Holbrook, who has been doing a one-man Mark Twain show since 1954. As I said, “only in Los Angeles”. Here’s a hint folks: Famous actors, out of context, look just like you and me and everyone else.

Upcoming Shows: Next weekend starts the Rep season with their production of “Avenue Q” at REP East (FB) on Sat January 17. The fourth weekend of January brings an interesting mashup: Pulp Shakespeare (or Bard Fiction) at Theatre Asylum (FB) — this show is described as  “Ever wonder what Quentin Tarantino’s masterpiece PULP FICTION would be like reimagined by the immortal William Shakespeare?”. The last weekend of January concludes with the Cantors Concert on Sat January 31 at Temple Ahavat Shalom, and I’m potentially looking for another show for Sunday. February and March pick up even more, with “The Threepenny Opera” at A Noise Within (FB) on February 15, a hold for “Loch Ness” at the Chance Theatre (FB)  on February 21, “The Road to Appomattox” at The Colony Theatre (FB) on February 28, the MRJ Man of the Year dinner on March 7, “Carrie: The Musical” at La Mirada Theatre for the Performing Arts (FB) on March 14, a hold for “Drowsy Chaperone” at CSUN on Friday March 20, “Doubt” at REP East (FB) on Saturday March 21, “Newsies” at the Pantages (FB) on March 28, followed by Pesach and the Renaissance Faire on April 11. Additionally, there’s a Marcy and Zina concert at Pepperdine on Tuesday, February 3; alas, as it is a weeknight, I may not make it. As always, I’m keeping my eyes open for interesting productions mentioned on sites such as Bitter-Lemons, and Musicals in LA, as well as productions I see on Goldstar, LA Stage Tix, Plays411.