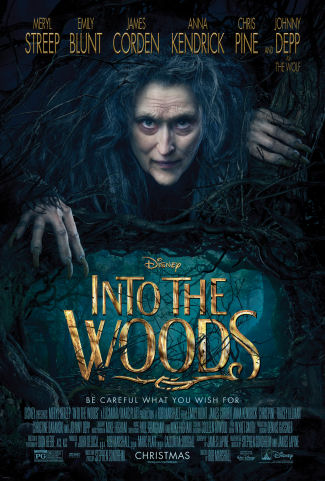 Last year, my reviewing didn’t start with a traditional theatre show;  it started with a Moonie and Broon concert at The Colony Theatre (FB). This year, again, the reviewing for the year doesn’t start with theatre; it starts with a Broadway musical now on the big screen: the new Disney production of Stephen Sondheim‘s Into the Woods (FB).  Remember: This will be where most people learn about this show, and what they believe this show to be; consider this sobering statistic: more people have seen Into the Woods in the movie theatre than have seen either Broadway production combined. Further, I’m willing to bet that by the time the film finishes its run, more people will have seen it on the screen than have seen any theatrical production: Broadway, regional, or amateur. Remember when people believed the theatrical The Sound of Music was the authentic version over the stage version. We’re gonna see the same thing here folks.

We’re in luck, however. I’m relatively familiar with the stage version of Into the Woods. In addition to wearing out the original (Bernadette Peters) and revival (Vanessa Williams) cast albums, I saw the original when it was on tour at the Center Theatre Group in 1989 (with Cleo Lane and Charlotte Rae), and I’ve seen at least one intimate theatre revival of the show. I’m pleased to say that the movie was reasonably faithful to the original. There were no songs added, no major changes to the story, and there were no major rearrangements. There were, to my ears, at least three songs cut out or changed in some way: the Finale to Act I/Act II opener was combined and reworked (“Ever After”/”So Happy” — “Ever After” became and instrumental and the two were reworked into “Back Into The Woods”), “No More” was transitioned into an instrumental score, and the reprise of “Agony” was cut.  Some characters were toned down — in particular, the pedopheliac nature of the Wolf; some deaths were softened or elided (Jack’s mother’s death was less violent; and Rapunzel’s unmentioned); some characters eliminated (the Narrator, Cinderella’s father). But the basic story and the message didn’t change. Further, a lot of the changes that had been discussed — in particular, eliminating the affair between the Baker’s Wife and the Prince, remained. Sondheim reportedly wrote two new songs for the movie… both of which were cut. In fact, other than the cut of the reprise of Agony, most of the changes were more on the level of cinematic adaptation and keeping the flow going (for example, you don’t need the act break when there isn’t an intermission). Wikipedia has a good summary of the changes. Alas, the changes do cut my favorite advice from the movie: “The closer to the family, the closer to the wine” (as well as all the advice in the closing song of Act I).

Cinematically, the movie was beautiful. This is where the real difference from the stage is apparent. On the stage you have to imagine much of the woods, much of the place, much of the magic. The scope is also further away: you can have multiple characters in multiple places all singing the same song at the same time. Cinema is much more “in the face”: you are seeing the actors through a close, not broad view. You don’t see multiple things happening at once (at least with this director); you have rapid cuts back and forth. It gives a different effect. Cinema can also amp the special effects — no where is this better seen than in the Witch’s transformation or the behavior of the magic beans. In general, the movie works.

I say “in general”, however, because one scene stuck out like a sore thumb: “On the Steps of the Palace”. The song is geared to Cinderella actually being stuck on the steps. When she steps out of the shoes and dances around, the context is lost. I can understand the cinematic effect desired, but she should have been stuck until she realized she could leave the shoes.

As from that, the movie was beautiful and engrossing. However, parents, just because this is about fairy tales does not mean it is appropriate for the little ones. Sondheim’s music is much too complex, and the movie much too long, for them to sit and be quiet. Further, the second half is quite dark. I say this especially to the folks at our screening who decided to bring a gaggle of 10 year olds who couldn’t behave to the show.

For the most part, the performances were excellent. You can find the full cast list on the IMDB page. Meryl Streep proved she is a triple threat: her singing performance was excellent and equaled her acting. The other principals were also strong: Emily Blunt as the Bakers Wife, James Corden as the Baker, Anna Kendrick as Cinderella, etc. My only real casting complaint was with Daniel Huttlestone as Jack. His accent was so heavy and so out of place I kept expecting him to sing “Consider Yourself” from Oliver!. The soundtrack overall was great, and complements the stage soundtracks (especially with great orchestrations and clear enunciations of Sondheim’s complex lyrics).

This is, to my knowledge, the sixth Sondheim musical to be filmed (including two where he only did the lyrics): West Side Story, Gypsy, A Funny Thing Happened On The Way to the Forum, A Little Night Music, Sweeney Todd, and this film. I think this film does Sondheim well.

[ETA: Whoops. I forgot to write up the previews. Now to correct that error]

Ob. Disclaimer: I am not a trained movie critic; I am, however, a regular theatre audience. I’ve been attending live theatre in Los Angeles since 1972; I’ve been writing up my thoughts on theatre (and the shows I see) since 2004. I do not have theatre training (I’m a computer security specialist), but have learned a lot about theatre over my many years of attending theatre and talking to talented professionals. I pay for all my tickets unless otherwise noted. I believe in telling you about the shows I see to help you form your opinion; it is up to you to determine the weight you give my writeups.

Upcoming Shows: Next weekend brings two shows: “Serial Killer Barbie: The Musical” (FB) at the No Ho Arts Center on Friday January 9 and “An Evening with Groucho” at AJU with Frank Ferrente at American Jewish University on Sun January 11. The third weekend of January starts the Rep season with “Avenue Q” at REP East (FB) on Sat January 17. The fourth weekend of January brings an interesting mashup: Pulp Shakespeare (or Bard Fiction) at Theatre Asylum (FB) — this show is described as  “Ever wonder what Quentin Tarantino’s masterpiece PULP FICTION would be like reimagined by the immortal William Shakespeare?”. The last weekend of January concludes with the Cantors Concert on Sat January 31 at Temple Ahavat Shalom, and I’m potentially looking for another show for Sunday. February and March pick up even more, with “The Threepenny Opera” at A Noise Within (FB) on February 15, a hold for “Loch Ness” at the Chance Theatre (FB)  on February 21, “The Road to Appomattox” at The Colony Theatre (FB) on February 28, the MRJ Man of the Year dinner on March 7, “Carrie: The Musical” at La Mirada Theatre for the Performing Arts (FB) on March 14, a hold for “Drowsy Chaperone” at CSUN on Friday March 20, “Doubt” at REP East (FB) on Saturday March 21, “Newsies” at the Pantages (FB) on March 28, followed by Pesach and the Renaissance Faire on April 11. Additionally, there’s a Marcy and Zina concert at Pepperdine on Tuesday, February 3; alas, as it is a weeknight, I may not make it. As always, I’m keeping my eyes open for interesting productions mentioned on sites such as Bitter-Lemons, and Musicals in LA, as well as productions I see on Goldstar, LA Stage Tix, Plays411.